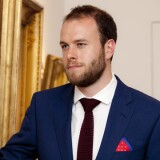 Reto Barmettler joined Sotheby’s Russian Department in 2013 having specialised in the field of Russian art since 2009. He was instrumental in the recent record-breaking sale of Russian avant-garde art which was led by masterpieces by Kazimir Malevich, Mikhail Larionov and Varvara Stepanova.

Mr Barmettler graduated with an MA in Political Science from the University of Lausanne and completed an MA in Art History at Birkbeck, University of London. He is a fluent Russian, German, French and English speaker.