Sotheby’s upcoming Arts d’Asie auction on 11 June features a rare large sandstone head of Buddha which stylistically can be dated to the late 7th century/early 8th century, and a strong group of Chinese and Himalayan buddhist gilt-bronzes from various private collections, among them a well-cast gilt-bronze figure of a Bodhisattva, possibly Manjusri, made during the Yongle period of the Ming dynasty. Click the image above to view the slideshow. 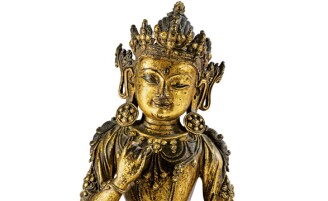