H arry W. and Mary Margaret Anderson were among the most trailblazing collectors of Post-War American art. Inspired by the works of French Impressionist painters during a trip to the Louvre in the mid-1960s, the Andersons embarked on a collecting journey that would come to define and enrich their lives, and by the end of that decade had discovered their passion for Post-War American Art, which became their focus for the next forty years. They believed firmly that they were only custodians of works of art, which belonged to the world at large. Their legacy of sharing included opening their home for viewings, generous lending to exhibitions, and substantial gifts to Bay Area museums, including the San Francisco Museum of Modern Art and the Fine Arts Museum of San Francisco. In 2011, the family magnanimously donated over 120 works to Stanford University, which has since been supplemented by more family and community gifts. The Anderson Collection at Stanford University opened in 2014 and is truly one of the most outstanding privately-built collections of American Post-War and Contemporary art in the world. As Gary Garrels, Senior Curator of Painting and Sculpture at the San Francisco Museum of Modern Art, described it, theirs is “a collection of collections,” unmatched in scope and breadth.

The selection of works that Sotheby’s is honored to present for sale sees the influence of European Surrealism transposed into an American context, with the Henry Moore sculpture providing the bridge between the two continents. Mark Rothko’s 1945 Surrealist work on paper and David Smith’s 1946 sculpture are indicative of the influence of Bréton’s movement on American art in the Post-War period and provide the foundation for Clyfford Still’s masterful PH-144 (1947-Y-No.1), a work selected by the artist for his pivotal 1959 exhibition at the Albright Art Gallery in Buffalo. Superlative paintings by Mark Rothko and Sam Francis give way to a group of abstract paintings from the following decades, including works by Robert Motherwell, Helen Frankenthaler and Kenneth Noland. Alongside these New York School works, a masterful Richard Diebenkorn painting represents one of the artist’s earliest forays into abstraction from figuration, and along with the David Park reflects the Andersons’ sincere interest in West Coast artistic production.

Taken together, this group of works from the Anderson collection tells the story of painting in the United States in the Post-War period, and simultaneously showcases the extraordinary breadth, quality and curatorial awareness that governed the assembly of this formidable collection. 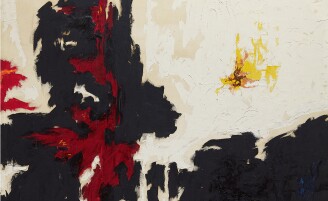 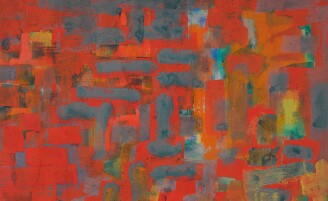