A n all-star team of creative titans have joined together with Sotheby’s to auction a unique selection of fashion, art and jewelry to raise funds for the people of Beirut, which was rocked by a devastating port explosion on 4 August.

Iconic items of pop culture memorabilia are among the lots to be sold, including Emma Stone’s exquisitely embellished Elie Saab dress that she wore to the 2015 Academy Awards when she was nominated for Best Supporting Actress for her role in Birdman, a jacket belonging to Mick Jagger, a custom Nicolas Jebran matador jacket worn by Madonna to perform at the 2015 BRIT Awards and the sequinned bodysuit worn by Geri Halliwell in the seminal music video for the Spice Girls’ debut single Wannabe in 1996.

In collaboration with IMPACT Lebanon and LIFE (Lebanese International Finance Executives), proceeds from the sale will be shared amongst five charities, ensuring that the funds reach the areas most in need.

The charities chosen include Nusaned, Beit El Baraka and Baytna Baytak, whose focus is on shelter for displaced families and rehabilitating residential homes and local businesses, Al Fanar, a venture philanthropy organisation who provide support for social entrepreneurs and small businesses, and lastly House of Christmas, who will help preserve and protect heritage buildings.

“Lebanon is home to an artistic community whose contributions to the cultural landscape cannot be overstated. The explosion in the Port of Beirut this summer sent shockwaves through the city and the world, impacting every sector of society in Lebanon with countless tales of loss, damage and displacement. Sotheby’s has come together with our partners to host the auction ‘To Beirut with Love’ to provide much-needed relief and funds to aid the healing process.”

Jewellery is important. During periods of uncertainty this might seem counterintuitive, but in times of crisis humans will always turn to adornments which defines us more fundamentally than anything else we wear. History tells that it takes more than disease, economic instability, pandemics or explosions to rattle our jewellery rituals. Jewellery endures in part because its deeply embedded meaning and cultural role shines like a hopeful beacon through dark days.

The jewels here are wrought with the significance of helping creatives in Beirut. “More Passion” states Tracy Emin’s diamond script on a cuff, created with Stephen Webster, from their I Promise to Love you collection summing up the mood with which the fine jewellers have responded to this crisis. This contemporary collection of stylish and easy-to-wear jewels, created by some of the most important names of our era, will elevate what you wear into something special and memorable.

There are timeless pieces from fine jewellery Maisons of Dior, Bulgari, David Morris and Pomellato to independent designers, such as Solange Azagury Partridge, Nikos Koulis, Noor Fares, Tatiana Versteaten , Venyx and Sabine Getty, with the artistic addition of a Damien Hirst golden Pill bracelet and hopeful rainbow diamond Vine earring from the Mukhi sisters whose Beirut store was destroyed in the blast.

Should these pieces whet your appetite to learn more about jewellery take note that the diamond and Akoya pearl ear cuffs from David Morris come wrapped with a champagne Masterclass in their private VIP salon on the origin of the world’s rarest jewels.

Creatives are inspired to produce items shimmering with light. Sparkle shines out from Mick Jagger’s bomber jacket glittering in pink. And so does the sequinned leotard worn by Spice Girl Gerri Halliwell in 1996. Then there are pure blasts of colour: Ralph and Russo’s three hot shades from scarlet to shocking pink; or Valentino red - on a simple high waist fiery dress, shimmering with translucid micro-sequins. Could anyone but Madonna take on a “matador” jacket by Nicolas Jebran - twinkling with Swarowski crystals?


So many designers offered their personal vision - and not necessarily a glitter gulch. Prada’s black vest is a historic collaboration with architect Konstantin Gricic. Tom Ford’s python handbag is all black, but gilded with his signature.


Amongst all the beauty and brilliance, one dress of Elie Saab touches the heart. Emma Stone’s long, slim gown in ripe-apple colour, dusted with shining embroidery, symbolised the determination and courage of the designer. His Beirut studio may have been smashed, but he has proved that beauty is untouchable.

Sotheby’s is honoured to offer works from artists across the globe in an effort to raise funds following the explosion of August 4th, 2020 at the Port of Beirut. We are humbled by the generosity of the artists who have kindly donated works for the city of Beirut. The selection included is rich, diverse and cross cultural, a reflection of the cosmopolitan air that flows across Beirut.

The selection includes a work by Hassan Hajjaj that’s emblematic of his oeuvre and pop art that embodies Marrakesh coolness. Included in the sale are two works that also are city specific, with the photograph from Fouad El Khoury from his Suite Egyptienne series, where he re-traces the journey undertaken by French philosopher Flaubert. The work included is a photograph of the Saqarra step pyramid in Giza, an iconic image, that stands the test of time. Whilst the lightbox by Joanna Hadjithomas and Khalil Joreige, uses postcards from a bygone era in Beirut, prior to the Civil War in the 70s. The work attempts to create a sense of nostalgia for the jet set crowd that flocked to Beirut.

Sotheby’s is also honoured to have a work donated by HervéNabon entitled Le Plongeon, St. Tropez, from 1985. As well as, a work on paper by the renowned artist Sir Frank Bowling, where we see a fountain of lyrical colours showing a spontaneity in his abstractionist work. 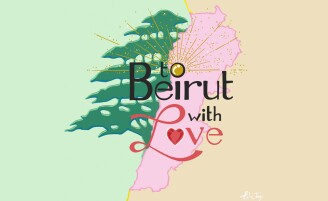