These three extraordinary seals, presented together for the first time, capture in their inscriptions and in the scars of history left upon them, the most defining moments in Chinese imperial history – from the apex of the Ming dynasty to its downfall, from the consolidation of the Manchu empire to the most controversial imperial succession power struggle ever, and finally to the decline of imperial China in the 19th century.

Until the emergence of this extraordinary jade piece, all Ming dynasty imperial seals were thought to have been lost or destroyed – having been either adapted for Qing imperial use or destroyed during the ravages of war during the fall of the dynasty.

The personal seal of Empress Wen – the consort of the Emperor Yongle, who played a key role in the establishment of the Ming dynasty – this rare survival is carved in the shape of a ferocious horned dragon, encapsulating the pinnacle of wealth and power of the Ming dynasty in the early 15th century. At the same time, the scars and scorch marks on the surface of the seal act as a powerful visual record of the tumultuous events of the 3rd June 1644, when the seal was clearly smashed and burned as the last Chinese dynasty was destroyed. The survival of this piece, which tells the story of the Ming dynasty at its height and at its fall, and is nothing short of miraculous, making it the only known surviving imperial seal of the Ming era.

This is the largest and most potent seal ever carved for the Kangxi Emperor, who in the late 17th and early 18th centuries, was the single most powerful person on earth, ruling over a vast empire of over 100 million subjects.

This seal, the largest and most potent seal ever carved for the Kangxi Emperor, bears the inscription “Jingtian qinmin” – “Revere Heaven and Serve Thy People” – words that served as the Kangxi Emperor’s moral and philosophical compass as he completed the conquest of China, anchored the Qing dynasty, and ushered in a long period of great prosperity and peace.

The Seal of the Qianlong Emperor, Incised with an Inscription Legitimising his Rule
乾隆重寶 繼祖承恩 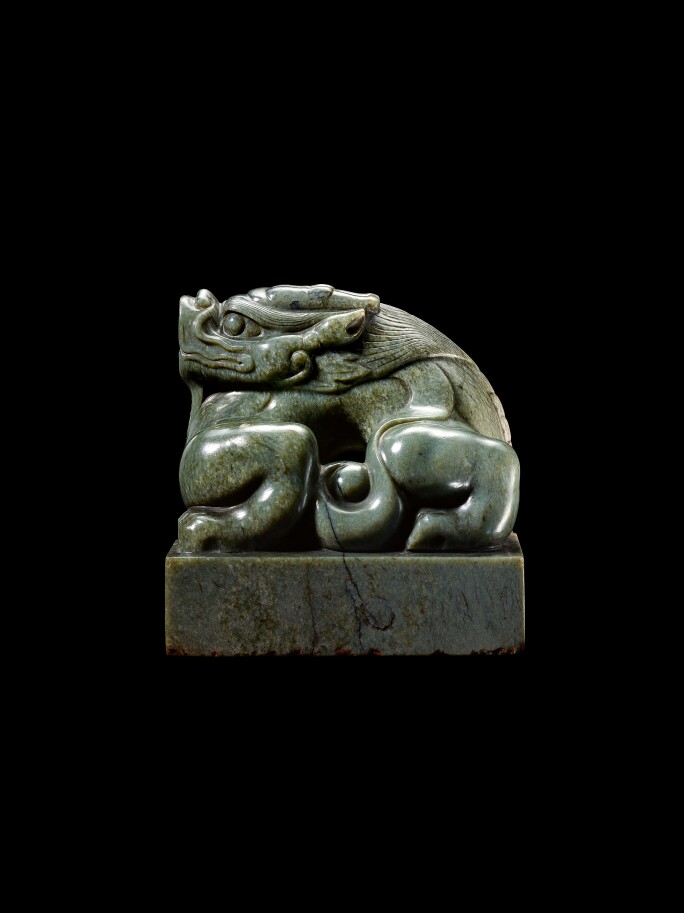 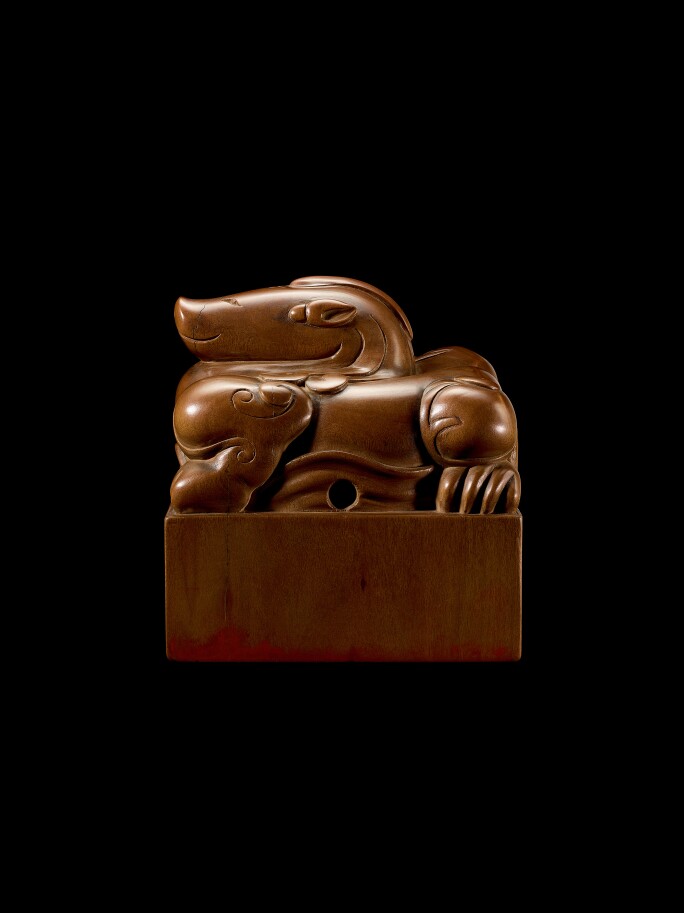 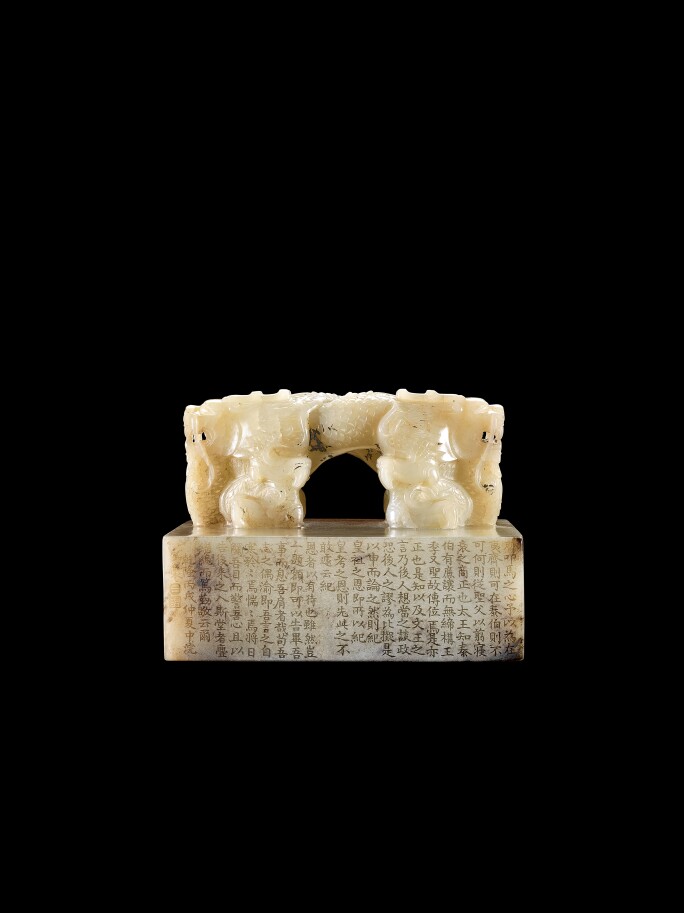 In addition to the historically important seals, we are pleased to offer a selection of imperial ceramics from the Ming and Qing dynasties, such as an impressive Yongle blue and white charger brilliantly painted with grapes, a Zhengde doucai ‘dragon’ bowl, and a Yongzheng blue and white lotus-mouth vase. The sale will also present a range of fine and rare works of art, including two treasures from the Qianlong period: an imperial Beijing enamelled 'peony' covered wine ewer and a richly-decorated ruby-red overlay covered glass jar.

Other highlights include a Yongzheng blue and white lotus-mouth vase, which, with an elegant, slender silhouette, attests to the ingenuity with which historical precedents were used in the creation of new works in order to meet the Yongzheng Emperor’s exacting standards for quality and antiquarian taste. It is extremely rare and only one companion vase appears to have been recorded.

The sale will also present three treasures from the Qianlong period: a ruby-red overlay glass jar, a blue and white Ming-style moonflask, and a Beijing enamelled wine ewer.

The composition and execution of the design of the glass jar, with exceptional attention to detail, set a standard of unparalleled excellence. The openwork knop in the form of a pavilion, together with the overlay seal mark on the base, attest to the superiority of workmanship of the Qianlong period.

In both its form and painted motif, the moonflask immediately references China’s glorious porcelain tradition. While flasks of this type are numerous, the present piece is particularly unusual for its size, the form of its handles and the raised rib on the neck.

The Beijing enamelled ewer and cover, elegantly shaped and delicately enamelled, illustrates the technical perfection of Qianlong enamelled wares. It is a close copy of a prototype from the reign of the Kangxi Emperor, whose fascination with the Western examples led to the establishment of the Imperial Enamel Workshop. 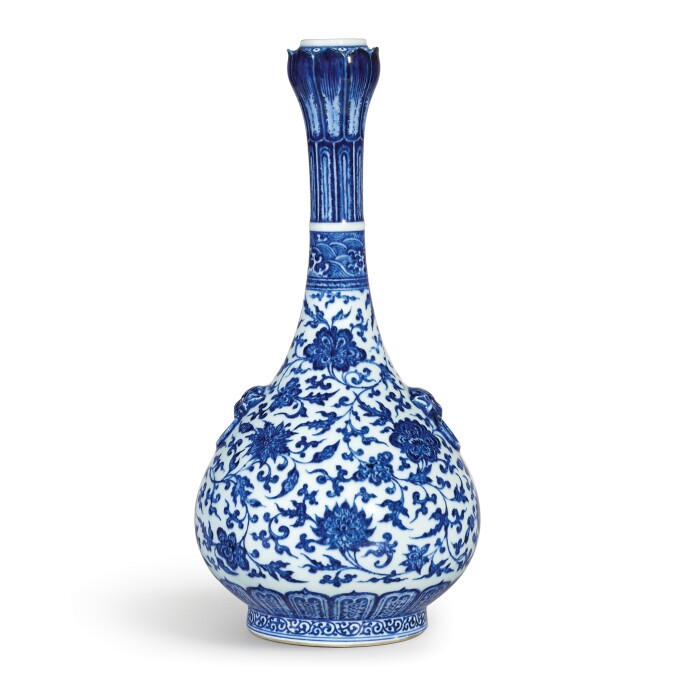 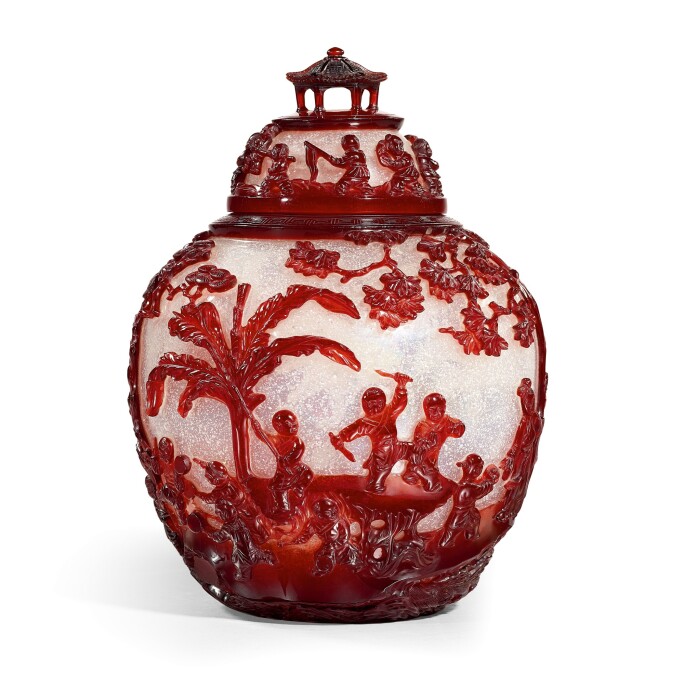 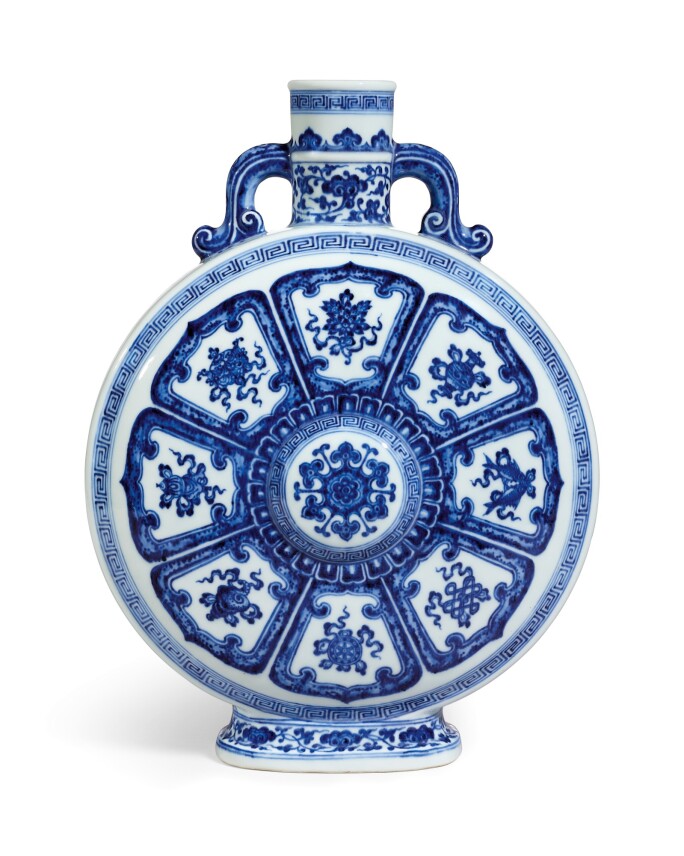 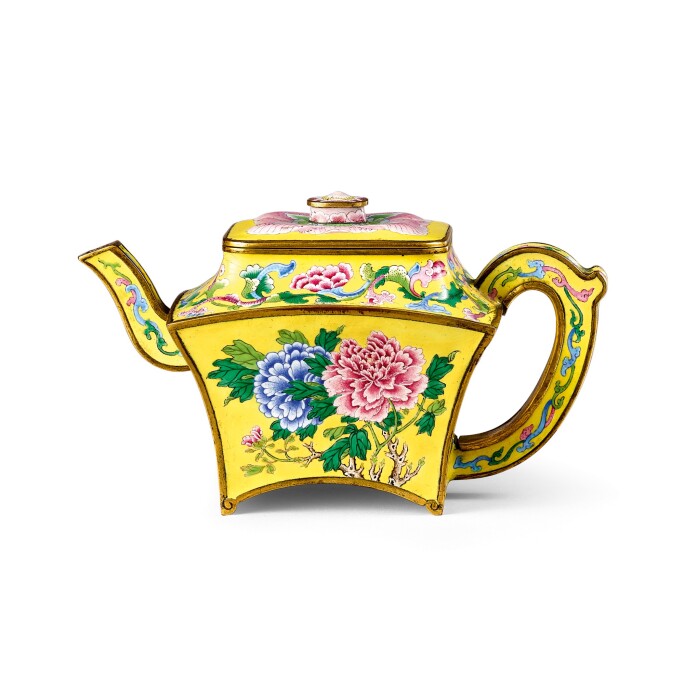 The sale includes twenty-three Chinese bronzes, carefully selected and put aside by the gallery Sydney L. Moss over three decades, which encompass all the major categories of post-archaic bronzes, including incense burners, archaistic vessels, hand warmers and religious figures, reflecting the refined taste of the official scholar elite from the Song to Qing dynasties. 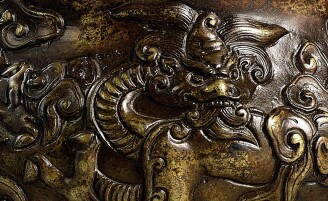 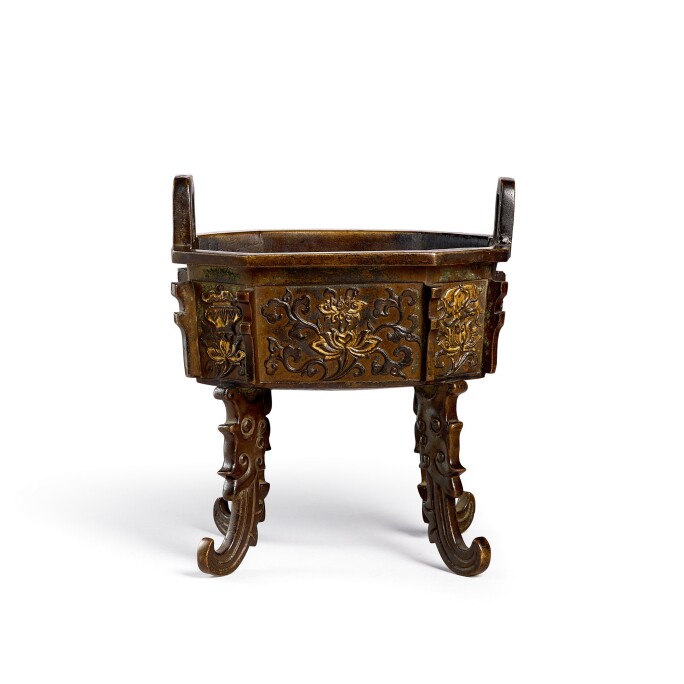 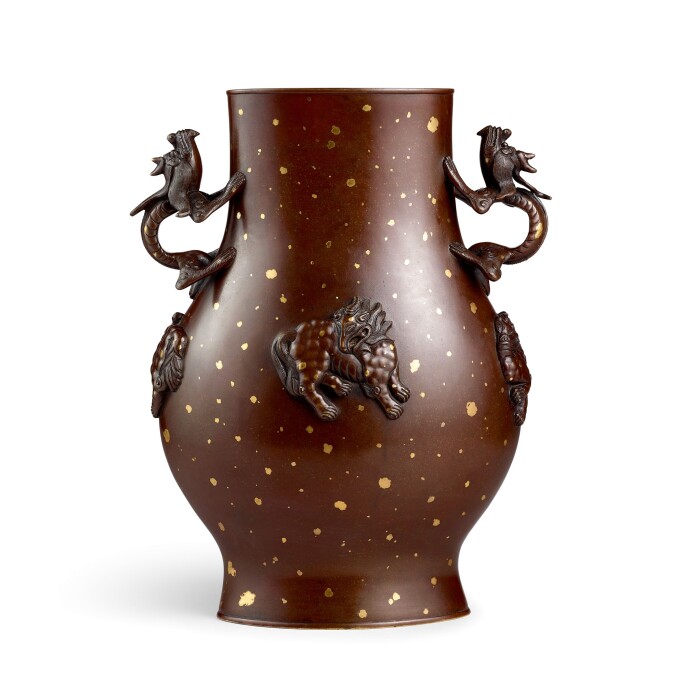 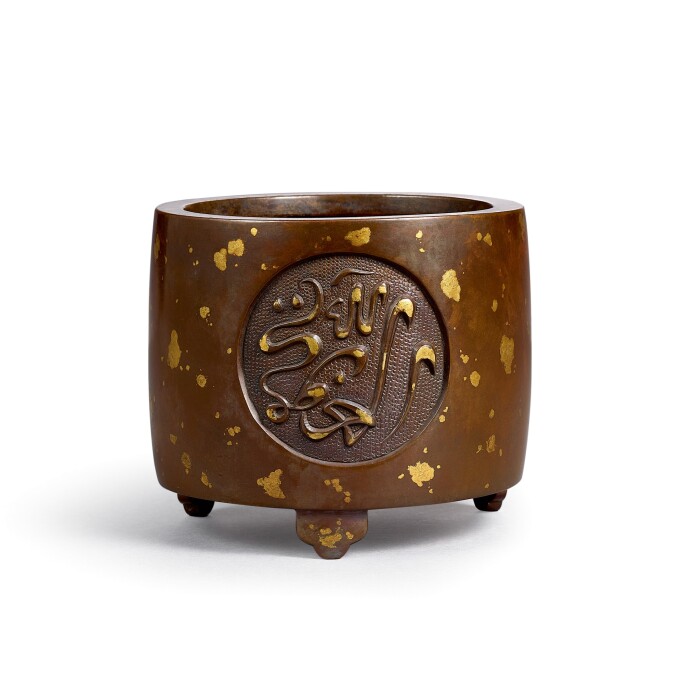 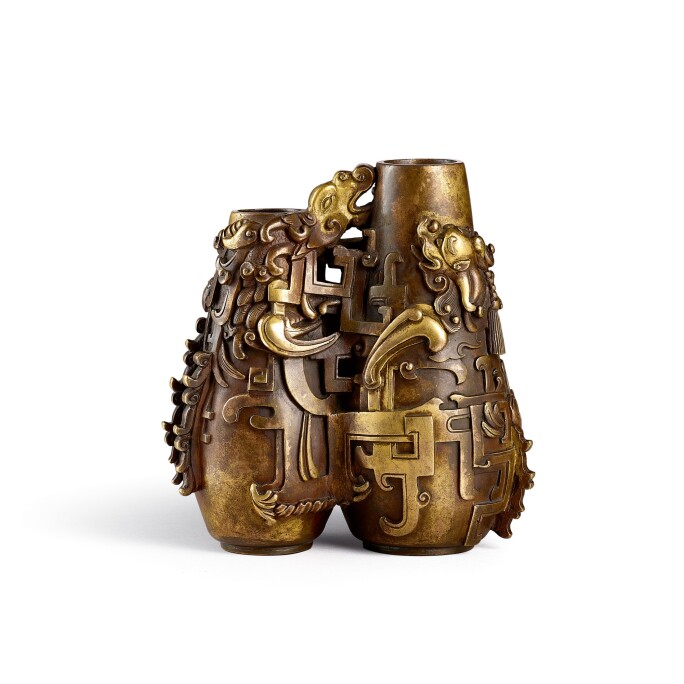