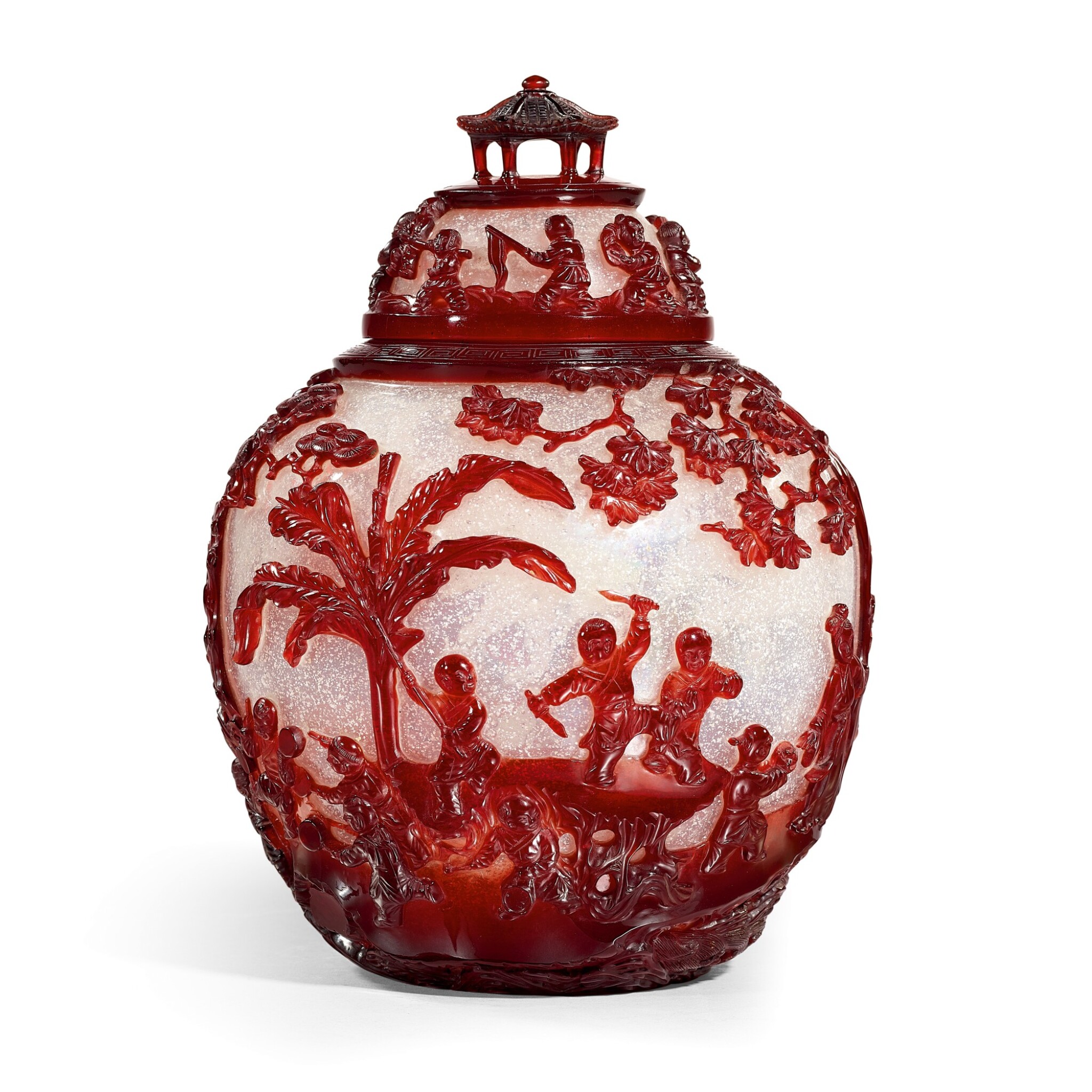 of ovoid shape, the deep red overlay skilfully carved in relief and undercut through to the translucent snowflake ground with numerous boys running playfully over a bridge, around a pavillion and along the rocky bank of a river under the shelter of pine, plantain and maple trees with two ladies in attendance, the children grasping weapons, flying flags and beating drums, all under a wheel-cut keyfret band at the rim, the domed cover encircled by further animated boys and surmounted by a pierced pavilion-shaped knop, the recessed base carved in relief with a red four-character seal mark

The jar and cover are in very good condition. There is a tiny approx. 0.2 cm burst bubble to the base of the cover's finial. There is minimal expected surface wear, especially to the edges of the overlay.

Professor Peter Hariolf Plesch in 'Some Decorative Techniques Found in Later Chinese Glass', op.cit., p. 48, notes on the present piece that "Chinese glass was carved by craftsmen who were by training, or at least by tradition lapidaries. Following that tradition, the best of them sought to give the decoration a three-dimensional quality which characterises the work of the best jade carvers". He further mentions ibid., pp. 53-55, that "the composition and execution of the design, the attention to detail, and the meticulous after - polishing of all the surfaces on this 'Playing Boys Jar' set a standard which is attained only by few pieces of similar size known to us, and is rare even in snuff bottles". The pavillion forming the knop of the cover was also laboriously cut from a solid layer of thick red glass and is a fine example of the very high level of workmanship achieved by this time.

Glasswares of this exceptional quality and craftsmanship were produced in the Glass House in the Forbidden City. The glass workshop was established in 1696 under the jurisdiction of the Zaobanchu. It was supervised by Kilian Stumpf, a Jesuit missionary with the scientific skills of glassmaking. Kilian is said to have introduced the art of glassmaking to the court and was in charge of hiring two other French Jesuit glass craftsmen, known as Vilatte and d'Andigne, along with a few talented Chinese artisans from Yanshen and Guangzhou to work in the Glass House. By Qianlong's reign glassmaking reached its zenith, especially with the help of further two Jesuit missionaries Gabriel-Leonard de Brossard and Pierre d'Incarville who introduced new designs and successfully produced glass types not seen before. The Qianlong Emperor was particular about glasswares produced in the Glass House and palace records show that "when the emperor was pleased with their standard of workmanship, he learned the names of the various officials responsible for the wares, and ordered them to be rewarded with generous amounts of silver. However, if he was irritated by the poor quality of the glassware, he would impose a series of penalties including the reduction of wages, and make the glassworks bear all the manufacturing costs." (Emily B. Curtis, 'Qing Glassmaking. The Jesuit Workshop on Canchikou', Luster of Autumn Water, Beijing, 2004, p. 98).

See a closely related Qianlong mark and period ruby-red overlay jar and cover, of slightly bigger size, but similarly carved in relief and undercut through to the translucent snowflake ground with boys playing around a pavillion and ladies in attendance, also with a pierced pavilion-shaped knop, sold in our London rooms, 20th June 2001, lot 111. Compare also a pair of bottle vases, carved through the red overlay on snowflake ground with the immortals in various pursuit against the background of rocks and pine trees, included in the exhibition Elegance and Radiance, The Art Museum, The Chinese University of Hong Kong, Hong Kong, 2000, cat. no. 111.

It is also unusual to find such a finely written seal mark on the base, precisely cut through the overlay rather than wheel-engraved. One jar with a Qianlong mark of this type was sold in these rooms, 12th May 1983, lot 277, and again in our London rooms, 17th November 1999, lot 788.