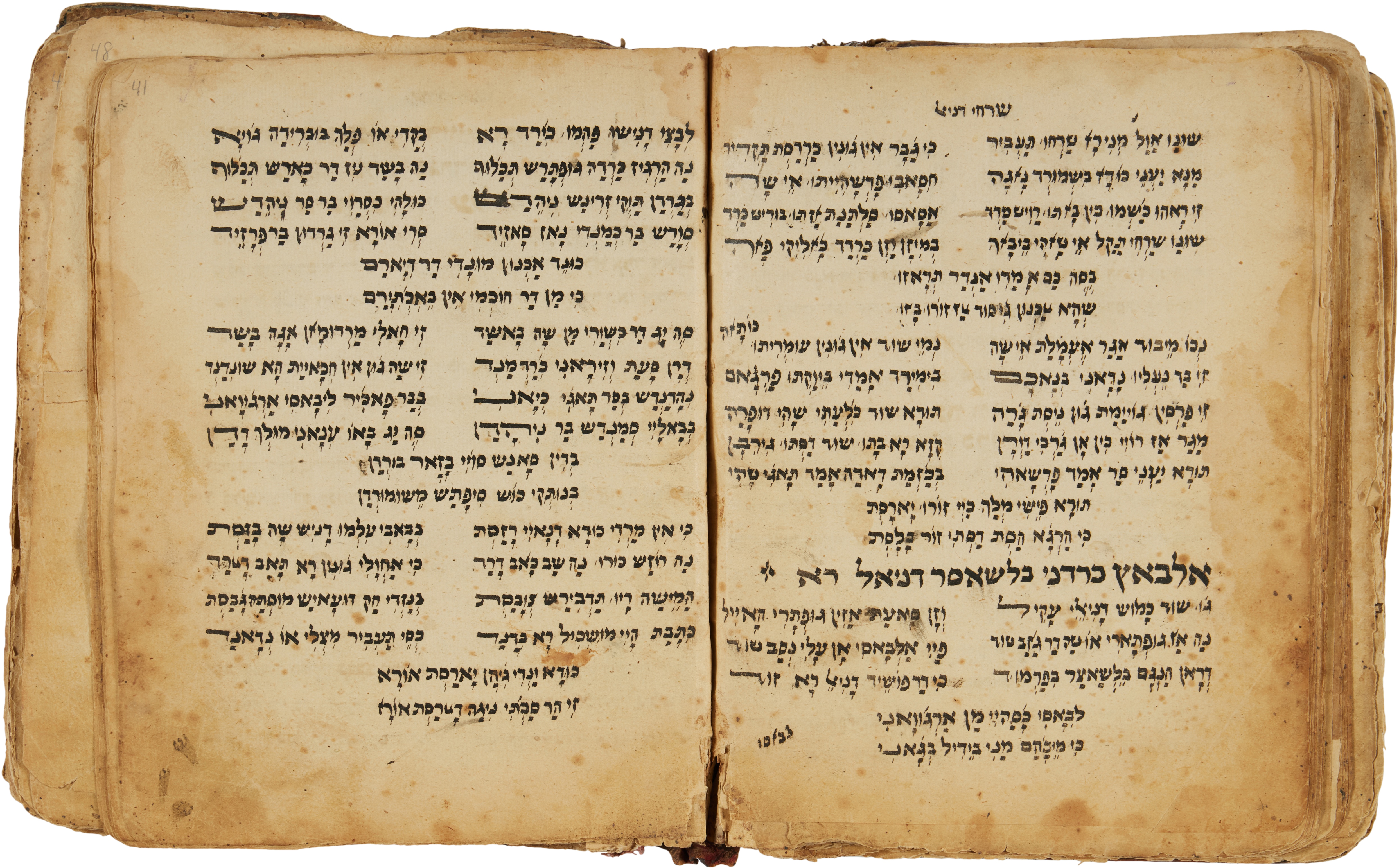 The earliest known copy of a rare messianic work.

Dāniyāl-nāme (Book of Daniel) is a narrative poem composed in rhyming couplets by Kh(w)āje Bokhārāi in 1606 and edited in 1704 by the well-known poet Benjamin ben Mishael of Kashan, whose pen name was Aminā (1672/1673-after 1732/1733). Written in the Tajik dialect of Judeo-Persian (Persian in Hebrew characters interspersed with Hebrew/Aramaic words), Dāniyāl-nāme constitutes a versified paraphrase of most of the biblical book of Daniel that incorporates select apocryphal and midrashic elements, as well as religious and moral teachings. Stylistically, it is modeled after the works of Shahin Shirazi, the great fourteenth-century Judeo-Persian author, who established a poetic genre that made use of the epic and mystic conventions of classical Persian literature. Other influences include Ferdowsi’s (940-1019/1025) epic Shāh-nāme (Book of Kings) and, possibly, the prose apocalypse Qiṣṣa-e dāniyāl (Story of Daniel). It appears to have been written against the backdrop of upheavals in Persian Jewish life, and the author’s impassioned supplications to God for messianic redemption permeate the book.

Amnon Netzer, one of the twentieth century’s most important scholars of Judeo-Persian literature, wrote his dissertation on Dāniyāl-nāme using the only complete manuscript of the work known to him (London, British Library Or. 4743), dated 1816. He transcribed the text into Persian letters and published part of it in his 1973 anthology of Judeo-Persian literature. Since then, three more Dāniyāl-nāme manuscripts have been identified in the collections of the National Library of Israel and of a private individual. None, however, is as early as the present copy, which, according to its colophon (f. 74v), was completed on 6 Adar 5531 (February 20, 1771), probably in Bukhara, the author’s native city.

As noted by Netzer regarding the aforementioned British Library manuscript, “From the first folio to the last, the text has suffered at the hands of copyists and redactors. Frequent corruptions and errors in words, meter and rhyme are found throughout the work. Some of these corruptions, together with effaced words make the reading of the MS difficult and sometimes impossible.” A critical edition of the original Hebrew text remains a scholarly desideratum, for whose compilation the present early, complete, vocalized copy would be indispensable.

Sotheby’s is grateful to Yehiel Tzeitkin and David Kalantarov for providing information that aided in the cataloging of this manuscript.

87 folios (8 1/8 x 6 5/8 in.; 205 x 166 mm) on paper (ff. 81v-82r, 86r-v blank); premodern foliation in pen in Hebrew characters in upper-outer corner of recto of first 22 folios (highly unusually, perhaps uniquely, the Hebrew numeration uses alef instead of yod for the tens and bet instead of kaf for the twenties, mirroring Arabic numeration); modern foliation in pencil in Arabic numerals in upper-outer corner of recto of remainder (foliation: 1-8, 8-86); written in Persian square (emphasized texts) and semi-cursive (text body) scripts in black ink; double-column text of (generally) 18-19 lines per column (16-17 on f. 2), frequently broken up by emphasized texts; ruled in blind; some words suspended above the line; justification of lines via dilation or contraction of final letters, diagonal inscription of final words, and occasional use of ornamental space fillers; vocalized almost throughout; running headers (Sharḥ-e dāniyāl) throughout; horizontal catchwords (often decorated) at foot of each verso; later horizontal catchwords at foot of each recto on ff. 2-7 only; intermittent strikethroughs, corrections, marginalia, and pen trials. Some flourished letters and decorative doodles interspersed throughout; text mostly written diagonally on ff. 75r-81r, 84r-85r. Ff. 1-2 written in a later hand on paper with a bluish tint; stub of original folio preceding current f. 3 still extant; moderate smudging, staining (including dampstaining), and thumbing; paper edges often brittle with short tears; intermittent tape repairs; some quires loose; gutters often strengthened; frequent minor damage in gutter at foot; slight loss of text near gutters of ff. 3-8, on ff. 26r-v (more serious) and 48r, and in gutter at foot of ff. 25v, 70v, 74v, some of it restored by a later hand. Early leather over board, blind-tooled with three Persian-letter cartouches on both the upper and lower boards, featuring significant wear at edges; spine and upper board joint reinforced with cloth; rodent damage to upper edge of lower board; contemporary paper flyleaves and pastedowns.