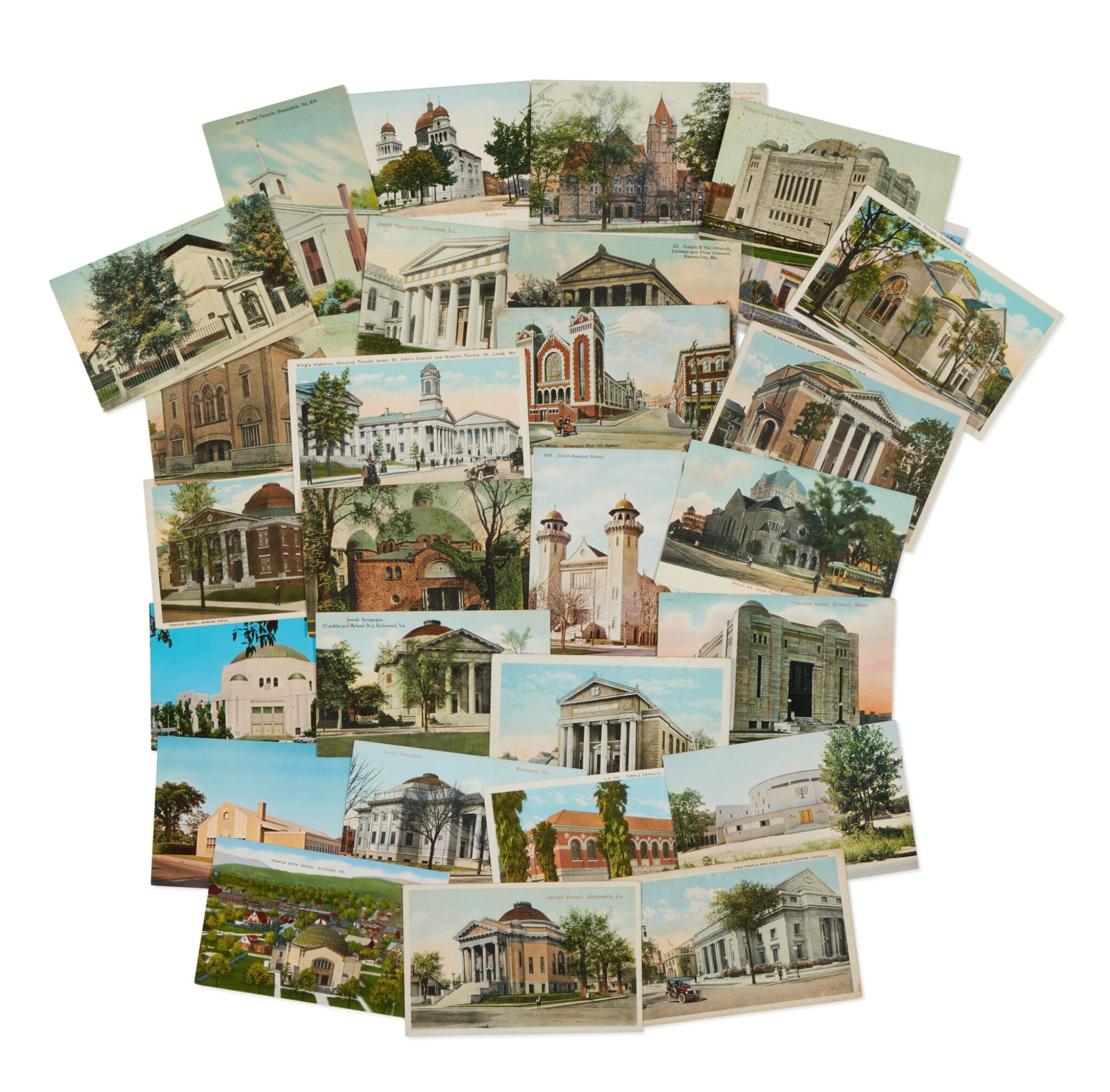 The postcard was invented in the 1860s, first in America and slightly later in Austria. The idea of sending a short letter to a correspondent cheaply and quickly spread like wildfire, and already by the 1870s the first picture postcards were being produced, generally for use by tourists sending brief messages during their travels. In the following decade, Germany emerged as a center of Jewish illustrated postcard design and manufacture, and by the early twentieth century Poland and America had risen to prominence in this field as well. Subjects depicted on such cards included Jewish street scenes, rituals, architecture, etc., very often accompanied by blessings and wishes for the Jewish New Year (see next lot).

The present lot comprises a large assortment of postcards featuring photographs or artists’ renderings of synagogues from across Europe, North Africa, and the United States. In some cases, the structures themselves no longer exist or have been repurposed, such that these cards constitute valuable visual testimony to the religious life and manners of twentieth-century Jewry in many parts of the world. Also included are cards depicting Jewish cemeteries, wedding and street scenes, hospitals, and restaurants. While many are blank and unused, several preserve private messages reflecting the concerns of those living through one of the most consequential periods of Jewish history.

A list of the cities whose synagogues are represented in this collection is available upon request.

213 postcards and photographs (including several repeats), plus 2 copies of the same stamp; some printed in color, some in black and white. Most in good condition, some with signs of wear at the corners or around the edges, small tears, etc. Accompanied by 51 modern reproductions of vintage postcards and a pack of modern postcards from the Major Synagogue of Barcelona. Housed in two binders (each approx. 14 1/8 x 8 3/4 in.; 360 x 220 mm), both with some wear at the corners and along the inner joints of the boards; one labeled “Synagogues Europe & Africa” and the other “Synagogues USA” on the spine; each postcard kept within its own plastic sleeve; extra plastic sleeves included.

Sharon Liberman Mintz and Elka Deitsch, Past Perfect: The Jewish Experience in Early 20th Century Postcards: An Exhibition (New York: The Library of the Jewish Theological Seminary of America, 1998).