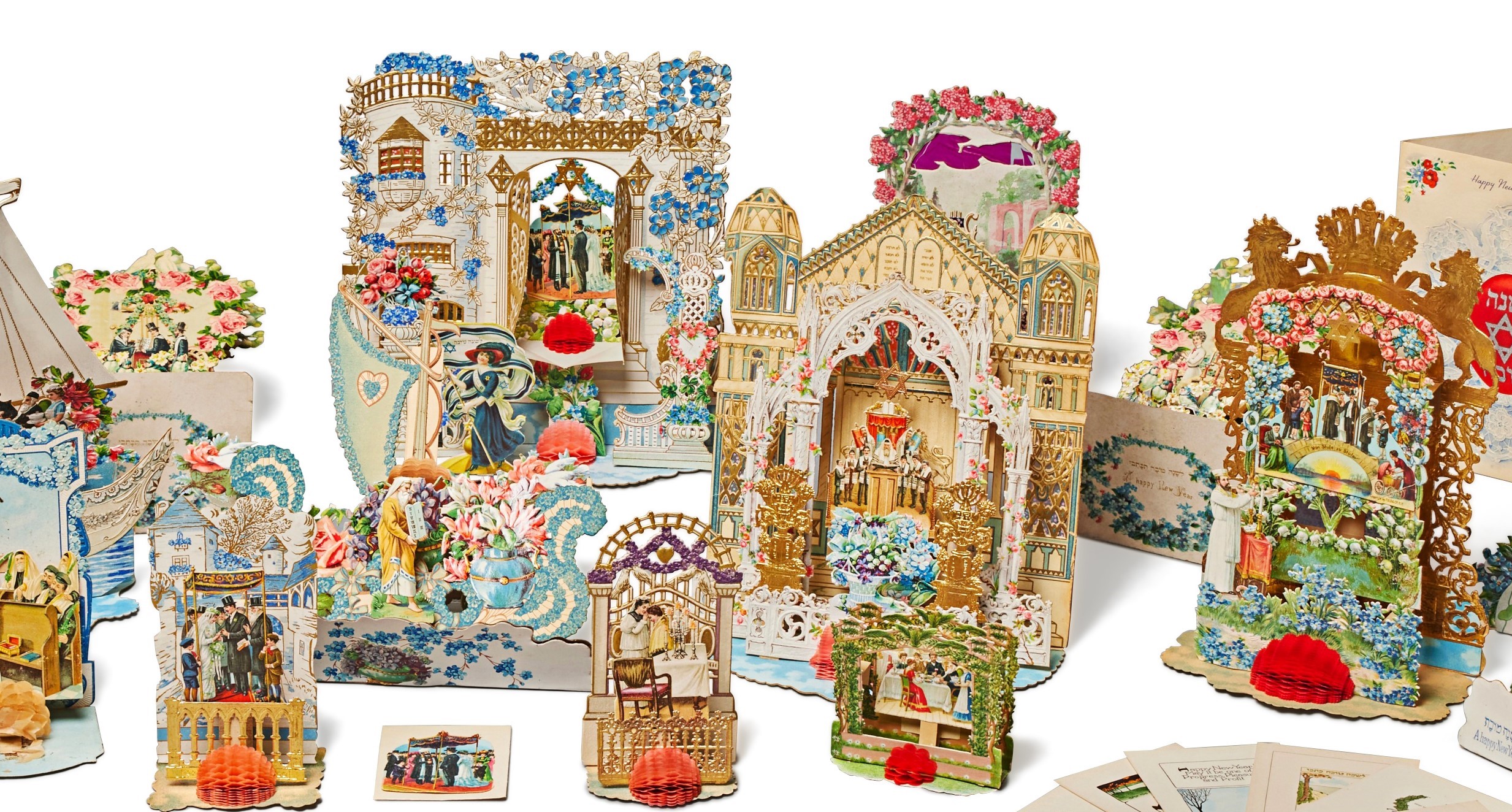 The custom of sending special Rosh Hashanah greetings originated in Germany in the fourteenth century. It is mentioned in the book of customs written by a student of the renowned rabbinical authority Jacob ha-Levi Moelin (Maharil). In the last decades of the nineteenth century and through the first two decades of the twentieth century, the German tradition of shanah tovah cards spread to the Jewish communities of Eastern Europe, spurred by the creation and distribution of colorfully illustrated shanah tovah postcards. The large wave of Eastern European Jewish immigrants to the United States in the first decades of the twentieth century led to a further dramatic expansion in the production of elaborately decorated Jewish New Year’s cards.

The most lavish were the three-dimensional pop-up Rosh Hashanah cards created from the 1890s-1910s. These ornate and brightly colored greetings were made by chromolithography, a printing method in which each individual color was applied separately to the paper using a series of hand-prepared stones. The individual pieces were printed on card-stock and then embossed to give them a three-dimensional effect, before being punched out by machine (die-cut). The recipient of such a card could display it proudly in his or her home. Inside, the cards hold greetings in English, Hebrew, and Yiddish.

The center of production of these fancy three-dimensional cards was Germany, but they were printed for the American Jewish market, rather than for the local German Jewish population. The primary importer of these cards was the Hebrew Publishing Company. Many of the cards feature traditional Jewish themes such as images of synagogue rituals (shofar blowing), while other cards display a more general motif such as a ship bearing wishes for a good new year.

The present lot includes a significant number of elaborate three-dimensional pop-up cards, as well as postcards, greeting cards, and Rosh Hashanah stationery. This collection of Rosh Hashanah cards reflects the buoyant optimism of the first decades of the twentieth century and the manner in which the Jews of the United States maintained the centuries-old tradition of sending greetings and blessings to one another in advance of the Jewish New Year.

The collection consists of:

Condition varies across the collection.

Shalom Sabar, “‘A Happy and Joyous New Year’: Jewish New Year greeting cards as a reflection of Jewish and Israeli ideals in the Modern Era,” in Rachel Sarfati (ed.), Each Year Anew: A Century of Shanah Tovah Cards (Jerusalem: The Israel Museum, 2015), 194-216.