Gauguin’s experimentation with color and form embodied the spirit of Post-Impressionism. He utilized flattened forms through a mysticism that allowed for color to become a primary conveyor of meaning. Over the course of his career, he continuously developed his theoretical approach to painting based on imagination.

Gauguin’s great-grandfather was Don Mariano Tristán Moscoso, of the old Spanish noble Tristán Moscoso family established in Arequipa, Peru dating to the 17th century. Don Mariano met his future wife, French-born Anne-Pierre Laisney, in the early 19th-century, when he was stationed as commander of Peruvian troops in Spain. However, as the couple failed to file proper marriage license, their union was considered invalid by the Tristán Moscoso family in Peru. This proved disastrous when, in 1807, Don Mariano died suddenly, leaving his widow and two children cut off from his family’s considerable fortune. Laisney and her daughter Flora Célestine, Gauguin’s grandmother, spent their lives lobbying to win legal rights to Don Mariano’s estate. Though their plight ultimately proved unsuccessful, Flora and her family, including Gauguin, were welcomed into South America’s wealthy social class.

3. He spent part of his childhood in Peru.

When Gauguin was a child, his parents moved the family to Lima, Peru to be closer to Gauguin’s maternal relatives. Gauguin father, Clovis, had intended to open a magazine in Lima, but he died during the voyage. The family continued on and lived in Lima for five years, until Gauguin was seven years old; this formative experience has been credited as a source of Gauguin’s preoccupation with Primitivism.

Gauguin enrolled in a naval preparatory school in Paris and served as a pilot’s assistant in the merchant marine for three years. He next served in the French Navy for two years before entering the professional marketplace. He only painted in his spare time.

5. His interests and love-life were heavily influenced by Gustave Arosa, the Gauguin family guardian.

When Gauguin’s mother died in 1867, custody of his family was left to Gustave Arosa, a businessman and art collector. Arosa introduced Gauguin to Mette Sophie Gad, a Danish woman who would soon become his wife. In addition, Arosa sparked Gauguin’s interest in art and art collecting.

6. He started his professional life as a stockbroker.

At the age of twenty-three, he was offered a position working in the Paris Bourse and quickly moved upward toward significant financial success and power. Eight years later he was earning 30,000 franks per year, the approximate equivalent of a $150,000 salary by today’s standards, which he doubled in the art market. Throughout his eleven-year career as a stockbroker, he continued painting as a personal hobby. When the stock market crashed in 1882, Gauguin slowly developed a plan to become a full-time painter, while painting alongside friends Camille Pissarro and Paul Cézanne.

7. His career was informed by geography.

Gauguin was in constant search for a “pure” human existence, devoid of European materialism and the weight of Western artistic traditions – a popular contemporary interest known as Primitivism. He traveled to Pont-Aven in Brittany, France in 1886, where a community of strictly devout Christians led a minimalist life. He continued his search with a major trip to Tahiti in 1895, where he would eventually settle for the rest of his life. In his paintings of Tahiti, Gauguin utilized the bright colors of the flora and fauna of the region and produced works of symbolic and mystical explorations of the human condition, as seen through the viewpoint of a European man in small villages in Tahiti. 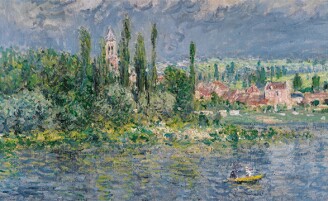 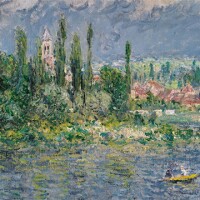 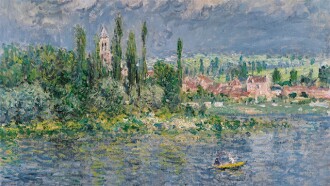 8. Gauguin had a complicated friendship with Vincent Van Gogh.

Gauguin and fellow Post-Impressionist painter Van Gogh were close friends, corresponded with one another about their theoretical and practical artistic understandings and even worked alongside one another. However, their relationship splintered, in part because Gauguin seemed unable to cope with Van Gogh’s unpredictable behavior and struggles with depression. Gauguin visited Van Gogh at his now well-known yellow house in Arles, where the pair painted together for nine weeks. Gauguin decided to leave, which pushed Van Gogh to brandish a knife. It was shortly after Gauguin’s departure that Van Gogh cut off his ear, though scholars have not certainly concluded a singular cause for Van Gogh’s violence against himself. Some historians even suggested that the trained swordsman Gauguin might have actually cut off Van Gogh’s ear himself, but this theory has been largely debunked. Although they never saw one another again, they continued to correspond until Van Gogh’s death.

Edgar Degas and Gauguin shared a mutual admiration for each other’s work. Degas was a relatively more successful, established artist, and consistently and publicly advocated for Gauguin. Gauguin was showcased in an exhibition curated by Degas in 1893, and Degas bought Gauguin’s work until his death. Their friendship was Gauguin’s longest-lasting and most supportive relationship. 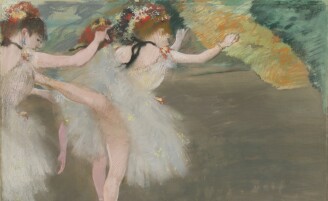 10. Gauguin’s commercial and critical success came after his death.

Unlike Van Gogh, Gauguin was able to sell his own paintings, but for relatively low prices. However, he never established a significant market for himself and was largely met with contempt by critics and collectors. Soon after his death in 1903, his paintings became popular among collectors, particularly after the Salon d’Automne showed 227 of his paintings in 1906. He had been confirmed as a leading figure in the development of Primitivism and Post-Impressionism in the twentieth century.

11. Gauguin has been portrayed by leading actors.

Multiple popular films have been produced about Gauguin or the period in which he lived. Anthony Quinn played Gauguin in Lust for Life, the 1956 Van Gogh biopic. Donald Sutherland played him in the 1986 biographical Gauguin film Oviri, while Sutherland’s son Kiefer played Gauguin in Paradise Found in 2003. Vincent Cassel played the artist in the 2018 movie that focused on his travels, Voyage to Tahiti.

12. He purposefully cultivated his public persona.

Gauguin was a shrewd thinker and carefully designed the ways in which he was perceived. He never appeared tortured or brooding, but rather presented himself as a free spirit who worked off-hand without preparation and outside of the studio. For example, he claimed in letters to friends that he worked without a preliminary sketch for his masterpiece Where do we come from? What are we, where are we going? – though an early sketch of the work does exist.

13. Gauguin had a large collection of objects, including major contemporary paintings.

Gauguin proudly collected a wide variety of objects including drawings, prints, Tahitian sculptures, a small group of pornographic photographs and pottery. Among these objects were paintings by his friends and Modernist colleagues who remained in Western Europe including Manet, Monet, Pissarro and Cézanne. He began developing his collection before ever leaving France and gradually contributed to it over the course of his life, bringing it with him across international waters.

Among Gauguin’s stylistic aims was the notion of synthesizing certain features of painting including the purity of form, color, and line, the essence of natural forms, and the artist’s perspective on a subject. Synthetism is associated with the Medieval cloisonné enamel technique of individual patches of jewel-toned colors. Synthetism focused on the effects of bold, unmediated patches of color interrupted by this flat line, as the guiding principles of a painting, in a particular pattern developed by an individual artist. Synthetism contributed to the development of Fauvism, Symbolism and Post-Impressionism.

15. There is a crater on the planet Mercury named after Gauguin.

In 1979, the International Astronomical Union named a seventy-kilometer wide crater in the Borealis quadrangle of Mercury after Gauguin. It has become tradition that the craters on Mercury are named after deceased artists, writers and cultural figures. Mercury’s craters are named after Italo Calvino, André Derain, Charles A. Eastman, Ernest Hemingway, Utagawa Kunisada, Dorothea Lange and other recognizable names.

16. Gauguin painted the fourth most-expensive painting in the world.

Gauguin’s Nafea Faa Ipoipo (When Will You Marry?) from 1892 sold for $210 million in 2014, making it the second most-expensive painting in the world at the time, behind Cézanne’s Card Players. It has since been eclipsed by Willem de Kooning’s Interchange and da Vinci’s Salvator Mundi.

17. He developed a small but significant estate in Atuona.

In 1901, Gauguin permanently settled in Atuona, the capital of the Marquesas Island group. He bought a small piece of land on which he had a two-story house built by local carpenters. He named it Maison du Jouir (the House of Pleasure), filled it with his collection, and moved in with his fourteen-year-old wife, a cook and two servants. He remained there for the duration of his life, building the collection and painting in his upstairs studio.

Gauguin’s Primitivism, which Picasso saw in works brought back to Paris by contemporary artists such as Paco Durrio, was a major element that contributed to Picasso’s aesthetics before arriving at Cubism. Picasso bought ceramics and stone sculptures by Gauguin, and his interest in Gauguin’s work and style grew when he saw his works at the Salons d’Automne of 1903 and 1906, which included large, heavy sculptures of nude women with exaggerated features. The mask-like appearance of the figures in Gauguin’s work helped lead Picasso to the forms that appear in Les Demoiselles d’Avignon.

19. Gauguin had at least eight children.

In addition to the five children Gauguin had with his Danish wife Mette Sophie Gad, he also fathered a child with a mistress in France and had at least two children in Tahiti with the girls he married. Two of his sons, Jean René and Emile Marae a Tai, became artists in their own right. Three of his children died while Gauguin was still alive. Some historians believe that he likely had more children than are known or acknowledged.

20. Gauguin had health issues for most of his life.

Gauguin suffered from syphilis and alcoholism, which both deteriorated his body. He shattered his ankle during a bar fight in France which never healed properly, leaving his legs with open sores for the rest of his life which were exacerbated by syphilis. In addition to alcohol, he consistently relied on morphine, laudanum and opium to treat his pain, but his dependence on these medications intensified his ailments over time. He died from a morphine overdose.

21. His final years are the most mysterious.

When Gauguin died in 1903, most of his paintings, letters, and collection were auctioned in Atuona where he lived, and many of these objects were burned because of their pornographic nature. Because most of his letters were lost immediately after his death, scholars have less information regarding his late years, and only speculate on his state leading up to his death. His eyesight likely deteriorated, and he probably actually lived in a less poor, “primitive” state than he claimed.