By Sotheby's
Sotheby's Made in Britain sale which is open for bidding 9-16 September features a selection of works by renowned British artist David Hockney. Ahead of the sale, we take a look at his life and work.

1. Hockney was born in the city of Bradford, in the English county of Yorkshire, in 1937. Bradford had been a hub of the wool trade since the industrial revolution. Hockney’s elder brother, Paul, would go on to become the city’s Lord Mayor.

2. David was the fourth of five children born to Laura and Kenneth Hockney. The former was a strict vegetarian and devout Methodist, the latter a clerk at a local accountancy firm who was also an amateur artist (with a particular fondness for photography).

3. As a young man, Hockney was a conscientious objector – meaning he refused to complete his National Service in the army. He spent two years as an orderly at St Luke’s Hospital in Bradford instead.

4. After initial studies at Bradford School of Art, in 1959 he moved to London to attend the Royal College of Art (RCA) – where he counted Derek Boshier, Peter Phillips, Allen Jones and Patrick Caulfield among his peers. (The five would establish themselves as major British Pop artists in the 1960s).

5. Other RCA contemporaries included the fashion designers, Ossie Clark and Celia Birtwell, as well as the film-maker Ridley Scott. Hockney graduated in 1962 with a Gold Medal distinction.

6. A year later, his first solo show, Pictures with People in, opened in London at the gallery of Mayfair art dealer, John Kasmin. It sold out. Soon the artist had earned enough money to move to California.

7. Hockney’s acrylic paintings of Californian swimming pools – such as A Bigger Splash (now part of the Tate Gallery collection) – are perhaps his most famous works. They are marked by high-keyed colours and joie de vivre.

8. In 1966, Hockney gave drawing classes at the University of California in Los Angeles. It was there that he met Peter Schlesinger, a student 11 years his junior. Schlesinger would become not just his lover but one of his greatest muses (inspiring work such as the swimming-pool painting, Peter Getting Out of Nick’s Pool).

9. Hockney has repeatedly spoken of his admiration for Walt Disney, calling him "a great American artist". In California, he also enjoyed visiting Disneyland, with Pirates of the Caribbean his favourite ride.

10. In 1969, he was Best Man at Ossie Clark and Celia Birtwell’s wedding. A couple of years later, he completed one of his most famous paintings: Mr and Mrs Clark and Percy, a portrait of the couple (and their pet cat) in the bedroom of their flat in Notting Hill. It gives strong hints of the tensions that already existed in the newlyweds’ marriage – in 1974, Clark and Birtwell divorced.

11. Hockney has a reputation not just as a painter but also for printmaking – even though he says he stumbled across the medium almost by accident while at the RCA (when there was a period he was so poor he sought out a cheaper alternative to oil paints and canvas).

12. Among his finest prints are a suite of 1970 etchings inspired by the fairy tales of the Brothers Grimm. He has continued to experiment with printmaking throughout his career, working with photocopiers; fax machines; and, most recently, inkjet printers, on which he printed drawings he’d done on his iPod and iPad.

13. In 1975, Hockney designed the stage for his first opera production: of Stravinsky’s A Rake’s Progress for Glyndebourne Festival Opera. He has worked on numerous other international productions since, including a 1992 version of Puccini’s Turandot for Chicago Lyric Opera and San Francisco Opera.

14. Hockney has always championed figurative painting over abstraction – even at times when this stance was unfashionable. In 1979, he wrote a piece in the Observer newspaper, attacking the outgoing Tate director, Sir Norman Reid, for a policy of acquiring too many abstract works. "This is just totally absurd," he wrote. "People have been painting faces for 5,000 years – and for good reason."

15. Hockney has always had a love-hate relationship with photography, though he admits to having had a ‘fascination’ with Polaroid photographs in the early Eighties. It saw him drop pretty much all other work, while he created a set of photo-collage works he called ‘Joiners’.

17. In 2002, he and Lucian Freud each painted a portrait of one another. Hockney sat for 120 hours for Freud, while the latter sat for just four hours for him. Why the difference? "He paints slowly and gossips," Hockney said. "But when I’m painting, I’m in silence".

18. In 2001, Hockney and the US optics professor, Charles M. Falco, published a controversial book called Secret Knowledge. They argued that the rise of realism in Western art from the early 15th century onwards was because Old Masters like Jan van Eyck used optical aides such as camera obscuras and camera lucidas. 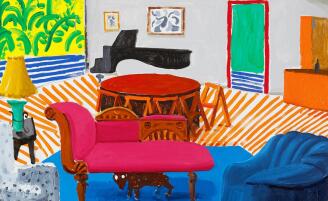 19. In 2005, after more than half a century away, Hockney returned to live in Yorkshire (for eight years). There he painted a number of landscapes of the countryside around the seaside town of Bridlington. These included his largest ever painting, Biggest Trees Near Warter Or/Ou Peinture Sur Le Motif Pour Le Nouvel Age Post-Photographique. Capturing the arrival of spring, it was painted on 50 separate canvases that Hockney subsequently pasted together into a single work. It measures 40ft by 15ft (12m by 5m).

20. In 2017, his retrospective at Tate Britain, David Hockney, received 478,082 visitors, making it the most popular exhibition ever held at the gallery. 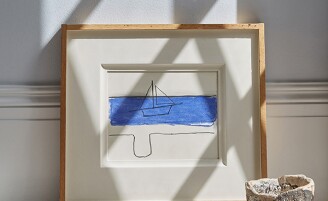