By Sotheby's
Sotheby’s London is delighted to present five Lin Fengmian paintings from the collection of Rasmus Sundt Gundersen (1916-1968) in the Important Chinese Art sale of November 3, 2021.

B orn in Bergen, Norway in 1916, Rasmus Sundt Gundersen pursued an illustrious diplomatic career, with posts as consul in Yugoslavia and France, before being appointed Norwegian Consul General in Shanghai from 1960 to 1963. In Shanghai, the Gundersen family - Rasmus, his wife Wenche and his daughter Mette - were members of the international expat community. They were first introduced to Lin Fengmian (1900-1991) by other diplomats stationed or living in Shanghai, who had visited Fengmian and had occasionally acquired paintings from him. The Gundersen family would recall that visits to see Lin Fengmian in his studio on 53 Nanchang Road in today’s Huangpu district of Shanghai were clandestine, and each time, Mr. and Mrs. Gundersen were blindfolded before getting into a car and taken to his studio. Yet the friendship between the artist and the Gundersen family, especially Mrs Gundersen, is honoured on the reverse of lot 97, Lady with a Fan, where Lin Fengmian wrote a short dedication in French ‘à Mme Gundersen, Lin Fon Ming, 23/4/1963, Shanghai’ (lot 97).

Rasmus Sundt Gundersen was transferred to New Orleans in 1963 where he was posted as Consul at the Norwegian consulate. After his death in 1968, the treasured collection of Lin Fengmian paintings moved back to Norway with the Gundersen family, where they were displayed in the living room in his widow’s house until her death in 1986. They have remained in the family since.

With a firm grounding in traditional Chinese painting techniques and styles, Lin Fengmian moved to France as a young man where he studied European painting at the Dijon Art College and enjoyed early success, exhibiting at the prestigious Salon d’Automne in Paris in 1922 and 1923. Back in China, Fengmian’s style continued to evolve. He strove to achieve a new synthesis of Eastern and Western art using rich colours, bold brushstrokes and angular forms and formats. The paintings offered in this sale, created in the early 1960s in his studio in Shanghai, collectively reflect his ingenious appropriation of Chinese and European styles, subjects and methods.

The Chrysanthemum Flowers in a Vase can be seen as the artist’s expression of his internal sentiment through the figurative depiction of still life objects, withingenious use of the unique quality of ink and colour on xuan paper. The petals are in shades of white and pale turquoise, the insides of each flower are painted yellow, whilst the leaves between the flowers are rendered in light green hues, adding warmth and colour to the overall picture. Lin also placed the vase in the centre of the painting. The gaze moves from the centre outward in a movement that takes in the four sides of blooming flowers and leaves, inviting the viewer to appreciate the full view of the blossoms. The reflection on the vase against a black background brilliantly forms multiple layers of shadows that create a strikingly irregular array of contrasting colours, further enhancing the brightness of the meticulously depicted chrysanthemum blooms.

The rare painting Boats By The Shore is the most unusual of Lin Fengmian’s works in the Gundersen collection. Wide, horizontal planes of solid colour divide the scene into the sky, sea and shore. The sombre colours convey a sense of brooding imminence. The yellow boats are the only splash of colour on an otherwise unsettlingly dark ground. The composition provides no explanatory narrative and seems to deny the viewer a comprehensive perspective or narrative content. In this sense this painting mirrors aspects of Western Surrealism. the type visible in the work of Rene Magritte or Giorgio de Chirico, which similarly defies any attempt at explanation or comprehension, with disjointed and surreal backdrops.

In the many paintings Lin completed of Chinese Opera, he used figures to compose dynamic, colourful paintings that feature visual rhythms and shallow spaces. Similar subjects were an important part of Lin’s studies since the 1940s. He frequently attended opera performances during his days in Shanghai, under the influence of fellow artist Guan Liang (1900-1986), a professor at the National Academy of Art at the time who often extended an invitation.

In Lotus Lantern, Lin transformed the paper into a stage as with its radiant background and black corners, endowing a sense of three-dimensionality of the figure despite being on a flat xuan paper. Enlivened with fluid brushstrokes in a highly expressionist and cubist manner, the figures are dressed in vibrantly coloured robes of bright red, yellow, pink and orange, and depicted in diaphanous dancing drapes. This painting not only showcases a dynamic sense of movement and lingering charm, but also exudes a freshness and vitality rarely found on any of his opera paintings. 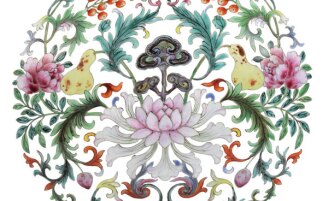