The Chokwe Princess: An Exquisite Beauty

One of the greatest accomplishments of African art, and indeed of world sculpture, are the magnificent figure sculptures of the Chokwe people, created in their Uchokwe homeland in 18th and 19th century Angola. The surviving corpus is small in number, with about a dozen major male figures extant which depict the ancestral culture hero Chibinda Ilunga (Petridis, Art and Power in the Central African Savanna, 2008, p. 93); these are among the most highly esteemed of all African figural sculptures, and are icons of African art. Much rarer are the equally impressive female figures, which formed the essential female half of the primordial couple.

Famed for their prowess as hunters and metalsmiths, the Chokwe rose from a decentralized network of chiefdoms to a major regional power during the 19th century, conquering and eclipsing neighbouring kingdoms as they achieved unprecedented wealth and power by trade with the Portuguese. They carried with them a rich oral tradition that celebrated the grand lineage from which they descended. A sophisticated court tradition blossomed, culminating in a tradition of wood figure sculpture which celebrated the mythical origins of those sacred dynasties. The art historian Marie-Louise Bastin defined the Chokwe artistic golden age as that of the "pays d'origine" – that is the Uchokwe homeland style before the expansion of Chokwe populations out of the region in the late 19th century (Bastin, La Sculpture Tshokwe, 1982, pp. 29-35). Statues of extraordinary refinement depicted the heroes of the stories which told of the foundations of their culture, and extolled the virtues of their revered predecessors.

The present figure is one of a very small number of female figures in the pays d'origine style which survive today, and is unsurpassed in its sculptural quality. Art historians have suggested multiple iconographic interpretations for these depictions of women. Especially when paired with the hunter Chibinda Ilunga, the female is thought to represent his wife Lweji, the female protagonist of the Lunda epic, or another highly ranking wife of Chibinda Ilunga. It has also been proposed that they commemorate individual dignitaries as successors to the founding couple, and indeed as the subject may be styled as the mythic ancestor, this interpretation does not exclude the first. A third interpretation is that the female subject may be the Queen Mother, embodying the matrilineal succession of power within Chokwe lineages.

One of the greatest sovereigns in African history was the famed female Chokwe chieftaness Princess Nzinga, who during the 17th century led the struggle of the Ngondo and Matamba kingdoms against the Portuguese. As an archetype of female power, this historical character and the legendary retelling of her story testify to the role of women in classical Chokwe culture.

The bow belonged to a woman, before it was taken up by a man.

The present figure certainly depicts a youthful, fertile woman of fleshy idealized features. It may therefore be suggested that this is not the queen mother herself but rather one of the beautiful young wives of the chief. The primordial significance of the female as mother and responsible for the foundation and perpetuation of the culture is particularly essential to the Chokwe, as they organized themselves in matrilineal lineages (ibid., p. 32). Furthermore the Chokwe applied an aesthetic principle which prized vigour and well-being; with "the criterion of youthfulness [...] applied to sculpture itself." (Stéphan in Kerchache, Paudrat, & Stéphan, L'art africain, 1988, p. 283). Petridis (ibid., p. 109) notes: "Female figures […] are rare compared with their male counterparts. It has been suggested that they incarnate and commemorate female ancestors (Bastin, ibid., p. 155). Whether they represent the queen mother (the mother of a chief) or his first wife (the leading woman among a chief's multiple spouses), the images signal the importance of the female line and female power." These depictions of women evoke in their commemoration of a powerful female, "the veneration of the Chokwe sculptor for that which opens the door to the ancestors" (Neyt, Fleuve Congo, 2010, p. 345).

The origin story of the Chokwe people relates to an epic myth which links together two of the great kingdoms of pre-colonial Africa: the Lunda Empire and that of the neighbouring Luba.

The hero of this epic myth is the character of Chibinda Ilunga, a 16th century Luba prince and hunter who left the Luba homeland ruled by his father, Kalala Ilunga. Arriving in the Lunda region to the west, the hunter prince encountered a young princess named Lweji. Surrounded by her female attendants, Lweji invited Ilunga to join her; and charmed by his hunting prowess and courtly manners, fell in love.

Of royal blood herself, Lweji had inherited the insignia of royal authority, a bracelet known as lukano, from her father, Konde, after the brothers of Lweji had displeased him. When Chibinda Ilunga and Lweji were married, their union became the foundation of the Mwata Yamvo dynasty, consolidating sacred royal authority over the region, which would rise to great power.

Lweji's brothers, spurned by their father and excluded from the newly founded royal court, departed from the Lunda homeland in turn and set out to find new land. Settling in the Uchokwe region, they formed a connection to the Chokwe people living there, intermarrying and conveying their cultural practices.

The resulting lineage therefore carried the memory of the story of Chibinda Ilunga and Lweji, and the Chokwe modelled themselves upon the character of Chibinda as a culture hero as they rose to fame as the greatest hunters of the region. Powerful chiefdoms emerged, along with aristocratic cultural practices and court art. An extraordinarily sophisticated sculptural tradition developed which is today one of the most highly celebrated African Art forms: highly refined sculptural masterworks which depict the royal characters of Lunda mythology, including Chibinda Ilunga, and his female counterparts.

With the Portuguese abolition of slavery in Angola in the 1830s, trade shifted to other exports, including elephant ivory. The prowess of the Chokwe as expert hunters served them well, and they rose to great wealth and prominence in the following decades. Chokwe culture underwent a shift as they expanded out from the Uchokwe homeland in search of resources in the 1850s; this decentralization resulted in a decline of artistic production and the fraying of court culture.

In classical Chokwe culture the term utotombo relates to that which is "executed with skill, artfulness, love, meticulous care in the making, and the effort to make it perfectly" (Leiris, Afrique Noire. La creation plastique, 1967, p. 42). The present figure and the small corpus of pays d'origine art exemplify this quest for beauty in celebration of the notion of divine kingship, and display the prodigious talent of ancient Chokwe sculptors. The female images in particular can be interpreted as expressions of utotombo, in light of their aesthetic beauty.

The present figure bears the classic pose and proportions of the famed Chibinda Ilunga corpus. The total symmetry of the standing pose is animated by the bent knees, the elbows held at right angles, the  projecting head, breasts and hands. A spring-like energy is contained in a perfect tension of formal rhythm, anchored by the exaggerated hands and feet, and topped by the flourish of the coiffure. The present figure was once crowned by actual hair, a feature which also distinguishes the famous effigy in the Ethnologisches Museum, Berlin, collected in 1886 by Gustav Nachtingal (inv. no. III.C.2969), and the figure formerly in the collection of Drs Daniel and Marian Malcolm. Other female sculptures, including the figure from the Dundo Museum (Bastin, ibid., p. 171) probably had a similar coiffure, now missing.

The face is the focus for ancient symbols of aristocratic beauty amongst the Chokwe. In a perfectly oval form, the forehead is "high, the hair shaved according to the fashion, so as to accentuate its elongation" (Carvalho, Expedição portuguesa ao Muatiânvua, 1890). The half-closed, finely delineated eyelids, emphasize the opening of the eyes "on the most elaborate statues [… whilst] the flat, regular nose, with its rounded end and strongly curved sides is characteristic [as here] of old sculptures" (Bastin, ibid. p. 183).

René Buthaud was the most important ceramicist of the Art Deco period in France. Trained in drawing and etching at the École de Beaux Arts in Paris, Buthaud was later a recipient of the prestigious Prix de Rome. His training as a classical draughtsman no doubt contributed to his pre-occupation with the beauty of the female form, and indeed the female nude was a frequent subject of the painted designs of his stylishly modern ceramics. Consistent with the taste of the period, Buthaud took an interest in Africa, not only for its distant allure, but also and more importantly for the simplified elegance of classical African sculptural forms. He developed a notable collection of African sculpture, acquiring works in the port of Bordeaux, the adopted city he called home from the end of the First World War. It is likely that he acquired the present Chokwe figure from a maritime trader there, or from a Bordeaux family who had done so, perhaps having come through Portugal. Buthaud developed his collection between the 1920s and the 1950s, and Bastin records that he had the figure by 1954.

The appeal of the present Chokwe figure to Buthaud's artistic eye is abundantly evident. His most classic and important designs feature stylized females of supple, youthful form, and indeed even with almond-shaped eyes lacking pupils and other formal features in common with the Chokwe maiden.

The statue was acquired from Buthaud by Olivier Le Corneur and Jean Roudillon and exhibited in their gallery in the summer of 1968, despite the civil unrest in Paris during those months. It then passed to Kevork Louis Essayan, the celebrated collector and son-in-law of Calouste Gulbenkian. Essayan paired it with a related male figure, though the couple did not begin life together. Jacques Kerchache acquired both from Essayan and published the two together in his iconic survey of African art, first published in 1988 (Kerchache, Paudrat, & Stéphan, ibid., p. 464, ill. 786).

One of the greatest advocates of non-western art in France, Kerchache was himself inspired by the modern artists of the early 20th century. His manifesto Les chef-d'oeuvre du monde entier naissent libres et égaux (1990) proposed what would become the most substantial revolution to the issues of presenting under-represented cultures in the West. His close friendship with Jacques Chirac and his recommendation that the Louvre found a department for the arts of Africa, Oceania and the Americas led directly to a permanent installation of this art in the Louvre, today shown in the Pavillon des Sessions. 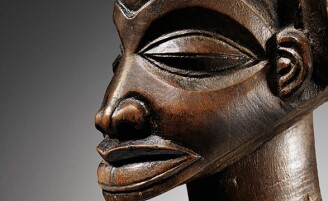