T he 1960s marked a transitional period in Guston’s career – upon reflecting on the harsh political climate unfolding around him, the artist resolved to drastically alter his formal style. Unsatisfied with the restrictive canon of Abstract Expressionism and therefore his inability to represent his environment, Guston abandoned the abstract flourishes that had become the hallmarks of his expression and replaced them with politically charged, figurative forms.

Outdoors, 1964 broadcasts this watershed, as the artwork pictorially oscillates between solid forms and gestural abstractions. A former leader of the New York School, Guston’s artistic output followed an elliptical path from figuration to abstraction and back again – and in Outdoors, the painting visualizes the artist’s refusal to adhere to the movement that he once enthusiastically forged.

Composed in 1976, approximately ten years after the creation of Outdoors, Legs, Rug, Floor exemplifies the artist’s departure from abstraction. Legs, Rug, Floor trades the meticulous layers of grey, blue, and pink paint visible in Outdoors, with a surreal scene of weighted symbols.

“He came to feel that the artist's role was not to paint private and appealing subjects but to produce public art, art with a social message, which would comment on vital issues and engage a large public.”

The cluster of limbs in Legs, Rug, Floor conjures a dim reality. The piles of shoes, confiscated from their owners, cast a vision that stands among the most visceral visual records of the Holocaust. The son of Jewish immigrants who fled Russia prior to World War II, it is certain that such images weighed upon Guston’s psyche – views that emerge from the depths of collective memory, specters of historical trauma. In the late 1970s, Guston moved away from his abstract approach, instead engaging in reduced figuration – a newfound visual vocabulary through which he could more accurately capture the social and political atmosphere of the time.

Thus in 1978, Guston painted Red Sky, a canvas that depicts a deep, red haze and illuminates a frieze-like row of cylindrical forms, resting atop a layer of blackened pigment. These cylinders suggest objecthood – at once evoking images of bludgeons and clubs. Red Sky demonstrates the tumultuous climate of 1960s America; a tension that Guston fervently sought to capture in his late works.

Specifically, Red Sky can be directly associated with the 1968 student riots that erupted across the country. Images of police officers waving clubs against a fiery sky flooded the media – swiftly becoming emblems of the national conflict that afflicted America.

Red Sky, the culmination of Guston’s figurative style, weaves together injury and clarity into a vivid composition, one that recalls the flourishes of his early abstractions, all the while imparting an unsettling and haunting vision of America. 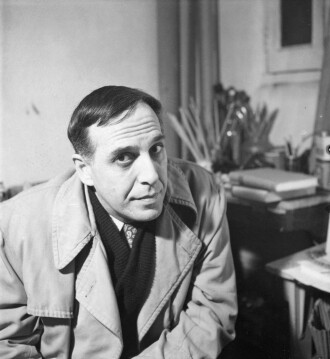