A n artist, designer and scenographer Hubert le Gall has been creating furniture that is poetic, urbane and exclusive for more than twenty years, drawing inspiration from the animal and plant kingdoms, as well as from the decorative arts of past centuries. One of his faithful collectors, Pamela Mullin commissioned around thirty pieces for her converted hunting lodge, a small 17th century Normandy jewel and now all of the furniture and objets d’art will be sold at auction this spring. A godsend!

When you discovered Pamela Mullin's hunting lodge, the renovation work was far from over. How do you come to terms with a place from another era?

"By being a catalyst, a bridge between the past and the present. The two hats that I wear as both creator and scenographer have taught me to respect each individual place. What was once posturing has become a reflex. I am not interested in approaching architecture by making a clean slate of the past. I like to immerse myself in the history of a place – its environment, its structure – and then imagine how to play off of all that. In 2011, when Pamela Mullin acquired the property at Saint-Calais, she undertook an exemplary restoration before choosing a classic decor, which she nevertheless agreed to mix up...

Our shared taste for not taking oneself too seriously came together with the rabbit Odilon that I used as candelabra within the bronze framework, with acanthus leaves around the mirror that I designed especially for the salon. The other pieces – tables, guéridon, lamp, vases, screen, and candlesticks – were worked into the decor. Under Pinocchio's nose, the Dodger dogs, the rabbits Foxy and Olympia and Odette the ostrich managed to hold their own. "

Your bestiary is mischievous. Where do you find your inspiration? From fairy tales?

Despite what some people think, my world is not that of Alice in Wonderland. I am a great admirer of the decorative arts of the Grand Siècle and the Age of Enlightenment, of the Pompeian style, of Neo-Gothic follies, of an exaggerated Symbolism such as that of Carabin, but also of this profusion of animal or plant imagery applied to objects and furniture. It is from these extraordinary places that I draw inspiration.

The Taureau cabinet is perhaps the most accomplished example of what is dear to my heart: the colors black and gold, a nod to furniture by Boulle, the hooves in reference to Pompeian furniture, the ears, an allusion to the handles of antique chests.

Unlike a sculptor such as François-Xavier Lalanne, who created furniture by opening up the body of the animal in order to give it functionality, my furniture is adorned with the animal that works as a decor. Here, the bull's head is placed on top of the cabinet as one might place a candle, while the golden wings and gilded bronze brandebourgs depict its lungs and entrails, echoing Damien Hirst's flayed animals.

So you are not indifferent to modern and contemporary art?

I am not attached to one single style or era. The irreverent creations of Gaetano Pesce enchant me as much as the naturalistically painted furniture of Marie-Antoinette.

When at times I draw inspiration from my contemporaries, it is with the intention of reinterpretation. The Alberto fauteuil was born following the discovery of a very small surrealist sculpture by Giacometti in the Musée d’Antilles. It was the change in scale that led me in a different direction. When I imagined my first flower table, I wanted a daisy that was very contemporary. How could I not be seduced by Andy Warhol's flowers, treated as a pattern for a silkscreen print?

Are you a mischievous designer? Provocative?

I love playfulness, cheekiness, and mischievousness that elicits ambiguity. In each of my creations, I wait for the moment when the identity of an object will shift and become a pretext for a poetic parenthesis. Let's take the Mon Yeti as an example. It was a classic lamp that was almost boring before I adorned it with fur and a chain. As soon as it was attached to the wall it became a hybrid object: half lamp, half animal. My way of being provocative is perhaps in daring to cross a Chesterfield with a rabbit.

Do you think function is more important than form?

It is above all the sincerity of the object that interests me. If I create a chair, it must be possible to sit on it. It will never be a sculpture even if it leaves room for unusual reinterpretation. There is a real pretension behind making objects that no longer have any use under the pretext that ever since Marcel Duchamp, one can take away an object’s purpose and turn it into a work of art. I have always been opposed to that sort of gesture.

As in your creations, you took some circuitous paths before becoming an artist-designer.

It is true that I flirted with business management to reassure my family. It was uncomfortable. So I took the plunge. Self-taught but good at drawing, I picked up some brushes and started painting. I was already eking out a living, carried by the precepts of the Arts and Crafts movement of William Morris and Edward Burne-Jones as well as by the poetry of Diego Giacometti. In 1996, I entered the third dimension and never left it. It was the year of my first flower table and the Vice Verso vase. With her black and white checkerboard, Andrée Putman was still a figurehead, but for the new generation, the way was clear. In 1997, when Elisabeth Delacarte offered me my first exhibition, everything remained to be done. One had to win over the collectors who did not hesitate to pay a very high price for a piece of furniture from Royère but who were still ignoring works by younger creators.

Very early on, you had the opportunity to add another string to your bow…

The scenography was a lucky opportunity and that is when I learned my art history. In 1996, thanks to Sylvain Bellenger, then director of the Musée de Blois, I signed on for a job that didn't exist at the time - exhibition hangings were reserved for museum directors and curators. Together we mounted three exhibitions: Felix Duban, Francois Mansart and Auguste Préault whose sculptures had just been presented at the Musée d'Orsay. The scenography must have pleased Henri Loyrette, then director of the institution, since he offered me the Edward Burnes-Jones exhibition. What more could I have hoped for? In reaction to the "White Cube" concept that had run its course, Guy Cocheval encouraged me to dramatize even more. His retrospective of Edouard Vuillard at the Grand Palais in 2003 remains unforgettable. The Mélancolie exhibition at the Grand Palais under the direction of Jean Clair shed light on a new challenge. Bringing the history of Melancholy to life and capturing its exceptional elements was a challenge. Fortunately crowned with success. From that moment on, proposals followed - one after the other. Up to twelve in a year. But I never got tired of the task, of risk-taking in service of the visitor.

An exhibition of Zao Wou-Ki in the Hotel de Caumont in Aix-en-Provence, the “Fables de La Fontaine” at the Musée Gustave Moreau and Uderzo at the Musée Maillol. I am reflecting on how to show the great artist that he was without overly sanctifying his work.

Let's also talk about another exhibition at Villa Kérylos, your own, which has been up since the spring but unfortunately muzzled by the health crisis.

It will open on 27 March and I am burning with impatience. I discovered the villa over thirty years ago. It is a place that is infused with energy because it perfectly integrates the quintessence of Greek civilization with the modernity of the early 20th century. Two years ago, when the French Centre de Monuments Historiques granted me this solo exhibition, I already knew that I would be bringing out new works in regards to the furniture and objects from their permanent collection.

Eternal lover of Greece, I decided to revisit – with humor – Ovid’s Metamorphoses in thirty-five moments: among the furniture, the Pasiphae sofa is nothing other than a nod to the passion of Minos’ wife for the great white bull and the Virgil desk a possible hymn to the mythical Arcadia. Among the objects, some are purely decorative: an embroidered tapestry of a fabulous bird, a vase that is not really a vase, a mobile of metal wire representing the epic of Ulysses...in the ideology of the Arts & Crafts movement. 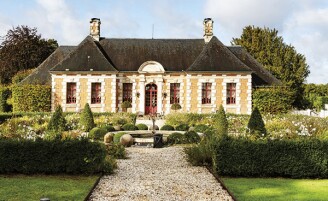