H ao Liang reimagines classical painting traditions paying homage with a contemporary approach, seamless blending the meticulous gongbi technique of Chinese realism with the visual language of Renaissance frescos. This fresh approach has earned Hao Liang cult status and critical acclaim. We can trace these elements back to some of the artist’s significant early works, which reveal how his mature style evolved and the ways he was exploring the scope of various media.

The large four-panel Skimming won Hao Liang First Prize at the Sichuan Fine Arts Institute for the best graduation works among the 2006 class. In the next decade, he would see a quick ascent, soon cementing his international reputation in 2017 at the main exhibition of the 57th Venice Biennale and two years later named one of the ‘Top 10 Contemporary Artists Under 45’, regarded as a leader of New Ink and the cohort of Chinese contemporary artists born in the 1980s. When he painted Skimming, Hao Liang had neither experienced this success nor developed the finely dressed skeletal figures, spindly plants, alienating organ-like landscapes, and magical, miraculous animals that would become his trademarks. This work presents the painter’s earliest intentions and heralded his future fusion of traditional Chinese ink painting with the lineage of contemporary art.

Classical allusions lie at the core of Hao Liang’s work to date. For example, Poison Buddha, The Seven Sages of the Bamboo Grove, and Treatise on Bamboo Skeleton Painting all express Hao Liang’s full immersion in ancient literary texts, historical subjects, classic art through allusions in the titles, figures, and imagery of his works. He imagines himself reviving the technique of an ancient artist to create works of contemporary art – i.e., ancient techniques responding to the contemporary moment.

Skimming appears to be an exception, as Hao Liang explained that his university years were the only inspiration. All of the models were fellow students at the school, including Hao Liang himself standing in the far left of the composition. However, the connection between Skimming and the artist’s more mature works is already evident in the highly skilled gongbi painting. From the texture of a denim skirt to the articulation of every eyelash and strand of hair, Hao Liang showcases his mastery of this ink painting technique. While this painting appears to be a realistic depiction of an everyday scene, it has much in common thematically with his paintings that seek to bring philosophies of the ancient past to the fore. In 2006, Hao Liang was already embedding clues that reference his explorations of antiquity – an instinct that will guide much of his later work.

To understand Hao Liang’s work, you needn’t be familiar with Chinese art history, according Philip Tinari, director of the Ullens Center for Contemporary Art. He says that if you happen to look at the paintings very closely, you will discover citations and intertextualities. Hao Liang will build context for what the viewer sees. Through his distinctive ink painting methods, he activates associations with classic works of art.

“I thought that the dynamism of light paper airplanes cutting through space invisibly linked the figures’ different lives, personalities, predicaments, and expressions. It was an immature but romantic idea.”

Hao Liang, a devout Buddhist, reflects on his connections with the students in the painting. All the rest are no longer involved in art, and he has lost contact with all but one. Of relevance is a sutra that the artist has long contemplated: 'One is born alone and dies alone. One comes and goes alone. One bears both joy and pain alone; no one to bear them on your behalf.'

He expresses his feelings through the solitary tree in the background. This withered lone tree would reappear in his later works, including Standing Alone in the Cold Woods, The Hunter and the Transformations of Hell, and An Anecdote from the Grove, in which the bare branches would embodying the artist’s exploration of the cycle of life and death on earth. In a 2020 interview introducing his work Ode to Dead Trees (a reference to Northern Zhou poet Yu Xin), Hao explained that people are metaphors for trees and trees are metaphors for people – and the flourishing and withering of a tree reflect the vicissitudes of human life.

“I see painting as writing. At every stage, my interest in painting has changed. I collect and organize my ideas and present them as they are.”

Skimming is an early blueprint for his artistic career. The work brings together the influences of Chinese traditional techniques, the tests of Western classical painting, the profundity of classical Chinese literature, and meditations on transience from Buddhism. He collects ideas and allegories from all times and places, then keeps certain small moments, like little paper airplanes, that can activate traditional cultural symbols and their associated worldviews. 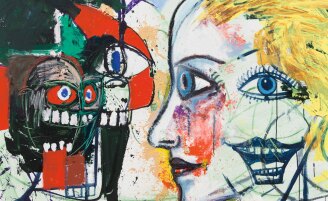