'Artforum' Archives Show Christian Eckart was a Mystic Before His Time

T he story of the art world during the 1980s could easily be scripted as a triangular tug of war between the Pictures Generation (Louise Lawler, Barbara Kruger, Cindy Sherman etc.); the Neo Expressionists (Basquiat, Julian Schnabel, Georg Baselitz, etc.); and, in the U.K., the Y.B.A.s (Tracey Emin, Damian Hirst) who each battled for the fate of art with sharpened critical teeth. These were artists out to trample, slice up and set fire to the establishment using art as their ideological weapon.

Now, nearly 40 years later, in a much more introspective, sensuous, and, dare one say, quiet era of painting, those wars can seem indulgent and outdated, and one looks back on the 1980s with tempting impulse to search for lost kin, a different kind of artist, one who presaged today’s concerns.

Christian Eckart (b. 1959) comes to mind as one of these possibilities. Today, Eckart lives and works in Houston, but in the 1980s the Canadian-born artist was a young painter living in New York (he studied at Hunter), creating artworks that seemed to bridge references between conceptual art, Greek philosophy and myth, and Christian iconography. 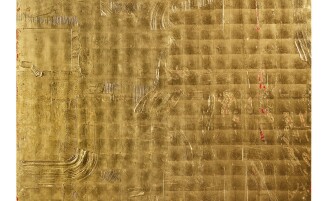 A 1991 Artforum article rightly characterized the “outsider” nature of Eckart in his own generation, saying that his “school are truly painters at heart, but feel they must apologize for it. The salient question with respect to those who hold forth in this camp (and Christian Eckart figures prominently among them) is how skillfully they negotiate the inherent ambivalence of their practice.” (September 1991).

It seems unlikely that Eckart felt much need to apologize for his painting, but rather his artistic concerns were of another sort entirely, and that his contemporaries seemingly missed much of the point. Rather than wryly commenting on modernism, he engaged art in a more mystical way, one that aligned him with Yves Klein or Robert Ryman, even Dan Flavin, and which reached far back into history.

A 1988 article in Artforum details how, during a visit to the Cloisters in upper Manhattan, Eckart discovered a catalogue on the Santa Croce Crucifix, a late 13th-century cross painted by the early Renaissance master Cimabue. After surviving a flood in the 1960s, the cross was restored and toured to museums around the world, inspiring a pilgrim-like fervor in the flocking crowds.

In Eckart’s young career this information was a kind of revelation, one that signaled the desire to create a spiritual connection in art that is very much alive. The experience came to inform the basis of his early artistic practice, in fact, as the same article points out, “an early piece from 1986, in fact, actually consists of the 80 illustration pages of the catalogue he acquired at the Cloisters, taped over, in silver and gold bars, so as both to complement and to obscure the images beneath—or both to recognize and to deny the sacral.” (September 1988) One of the most arresting works in this oeuvre is Eckart's Eidolon #1101, which Artforum featured in its 1988 review of the artist's work. The exact same piece is currently for sale in Sotheby's online auction, Colossal! Monumental Works from the 1980s.

[Eckart's works] are Hegel’s abstract spirit become extant being, they are the body and the void."

Eckart, throughout the late ‘80s and ‘90s, would create contemporary icons, even giving a series the name Andachtsbild” (Devotional image), and filling his often elaborate, multiform gold leafed frames, not with the figurative imagery of the church but with “solid plywood panels either faced with monochrome Formica—in supersaturated colors like those of the Trecento—or gold-leafed, mainly flat but with here and there a heavy impasto brushstroke showing through” which the author finds to be “monuments to the most pared-down, elemental pictorialisms: the monochrome and the brushstroke.” (September 1988)

His series from these years bore poetic names, “Odyssey” and “Illumination” and often incorporated gold leaf, or tetris-like shapes or multiform canvases reminiscent, in their shapes of medieval crucifixes, triptychs, even the body of Christ in deposition scenes. Today, these works read as strikingly contemporary and timeless, at peace and a part of history, but existing beyond. Their mythical and Christian references multiply within their structures: the works are hybrids, both modernist and ancient, both sacred and profane, on Claudia Hart surmised in 1988, “Eckart’s sacraments...are also the concerns of what we usually identify as religion, be it Dionysian or Christian—they are Hegel’s abstract spirit become extant being, they are the body and the void.” (September 1988)