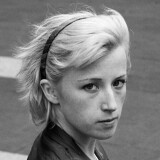 Born 1954.
Interested in selling a work by Cindy Sherman?
Request an Estimate

Works by Cindy Sherman at Sotheby's

American artist Cindy Sherman is a photographer and filmmaker famed for her conceptual self portraits. Sherman is considered one of the defining artists of the Pictures Generation, a group of artists who, beginning in the 1970s, synthesized shrewd explorations of identity with the changing face of mass media and popular American culture.

Raised in Long Island, New York, Sherman began studying painting at Buffalo State College in 1972, eventually giving up the medium in favor of photography. She completed her best-known work at the age of 23, Untitled Film Stills, a series of 70 black-and-white photographs of the artist dressed as a variety of women characters and caricatures, including bombshells, seductresses, ingénues and housewives. Inspired by art house films and b-films, Sherman carefully curated the settings and scenes in which her characters appear. Through a critical and often humorous lens, these images brought attention to the male gaze. Sherman directed, starred in, and photographed each image, subverting the gaze of the male réalisateur and viewer, and emboldening herself, while questioning the notion of representing and performing womanhood. In the 1980s and 90s, she expanded her scale and her subject to experiment with medium and form, photographing mannequins and prosthetics in pornographic shots, or restaging photographs of historical portrait paintings of the 15th through 19th centuries. Her interest in the grotesque in photography and film has both criticized increasingly materialistic and youth obsessed culture, and driven forward avant-garde aesthetics.

Museums with Works by Cindy Sherman

Artist Image: Copyright Robin Holland
Please note that prior performance of the indexes and realized returns contained herein does not guarantee future results. In addition, there is no guarantee that random collections of individual works of art or stocks will yield index returns. We are not financial advisors and we are not in the business of recommending art as an investment. We also have no comparative advantage in forecasting the future direction of the art market. Investment decisions should be based on the risk return tolerance and time horizon of the investor with, if desired, the support of a licensed financial advisor. This information is provided "as is" and with no representations or warranties either express or implied of accuracy, merchantability, fitness for a particular purpose or of any other nature are made with respect to this information or to any expressed views presented in this information.