Rembrandt's Abraham and the Angels

T his small panel by Rembrandt has remained in private hands for over a century and a half. It is one of the most well-documented paintings by the artist and it has the distinction of never having been doubted in the literature. The renowned Rembrandt scholar, Ernst van de Wetering, has indicated that this painting, with its reliable signature and date, as well as the “unmistakably Rembrandtesque character of its conception and execution,” is unquestionably authentic. Moreover, this is almost certainly the “Abraham with the three angels by Rembrandt” that was described in a transaction between two merchants in Amsterdam in 1647, the year after the painting had been executed.

After trading hands in 1647, the painting then appears in the collection of one of Rembrandt’s most accomplished pupils, Ferdinand Bol. It is subsequently recorded in the collection of Jan Six, (1617-1700), a descendant of the well-known merchant of the same name who was a friend and patron of Rembrandt. In the early 19th century it was owned by the famous American expatriate artist, Benjamin West. After passing through several prestigious hands, it was acquired for the renowned Pannwitz Collection of Dutch masters, where it remained for over 75 years.

Rembrandt is known for his biblical scenes, but only 29 of the more than 300 paintings he executed depict scenes drawn from the Old Testament. This panel reveals the moment when Abraham, who generously offered nourishment to three complete strangers, recognizes that two of them are in fact angels, and that the third is the Lord himself, indicated here by a luminescent figure of an angel who is the principal source of light in the scene. We are witnessing the precise instant when God reveals himself to Abraham and prophesizes that his elderly wife Sarah will bear him a son within a year. This son was to become Isaac, patriarch of the Israelites and according to Matthew (1: 1-17) a link in the lineage from David and Abraham to Christ. Abraham is also one of the most important prophets in Islam and is seen as a father of the Muslim people through his first child, Ishmael. 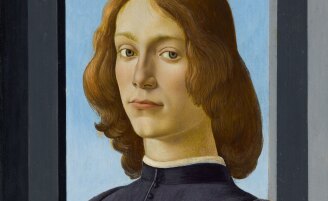 “This panel reveals the moment when Abraham, who generously offered nourishment to three complete strangers, recognizes that two of them are in fact angels, and that the third is the Lord himself.”

Rembrandt is famous for his large-scale history paintings, but it is less recognized that he produced quite a few smaller paintings derived from stories in the Bible and historical literature. It was in the 1640s that the artist became more introspective in his choice of subject matter, expressed in paintings that display less movement and agitation. Instead of high drama, Rembrandt began to focus on subjects that encouraged thoughtful contemplation. Abraham and the Angels is one such work.

“This is almost certainly the last opportunity to acquire a painting of a biblical narrative from the Old Testament by Rembrandt.”

This is almost certainly the last opportunity to acquire a painting of a biblical narrative from the Old Testament by Rembrandt, as the only other painting by the artist that depicts a biblical narrative remains in a private collection in the United Kingdom and is subject to British patrimony protection.

Paintings by Rembrandt Sold at Sotheby's