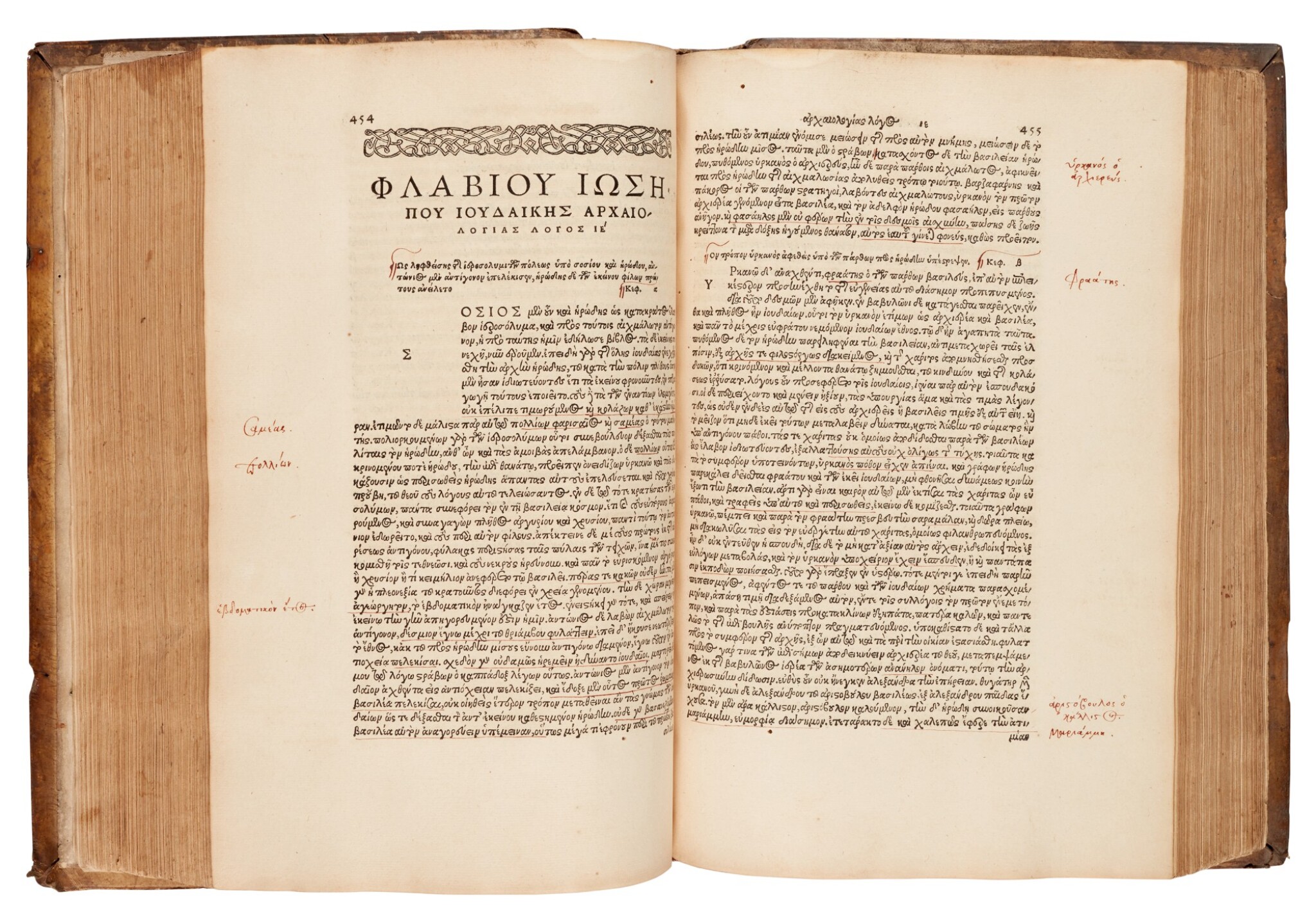 folio (333 x 225mm.), text in Greek, title printed in red and black, woodcut initials and headpieces, woodcut printer's device on final verso, neat early annotations in Greek and Latin by a German scholar (with the date 25 July 1546 at the foot of c3v, 30 July 1546 on f1r; 9 May 1546 on p. 716; 9 February 1549 on p.515), seventeenth-century German stamped pigskin over wooden boards (with a roll tool including Moses with his tablets), two clasps, heavily wormed at start, quire M misbound, binding rubbed, lacking both straps, upper joint cracked

A richly annotated copy of Josephus, with the dates of reading for each section (1546-1549) and comments in both Greek and Latin. The anonymous annotator gives us a few autobiographical notes, such as the death of his father and his mission to Schwäbisch Hall on behalf of the town of Heilbronn (Baden-Württemberg), presumably his hometown, but his comments firmly display his Protestantism and his negative attitude towards Charles V.

On x6v the annotator comments that the grape harvest interrupted his reading at this point; more poignantly, on Yy2 he notes that his 80 year old father has died, in June 1546. On 4 July 1546 he records that there was a great war not just in the duchy of Württemberg but also across almost all of Europe, referring to the Schmalkaldic War of 1546-1547 between the Catholic Charles V and the Lutheran states within the Holy Roman Empire. The note also mentions that the Holy Roman Emperor and the King of the Romans (Ferdinand I) were celebrating a wedding in Regensburg "ociose" (lazily); Charles did have a mistress in Regensburg that year, Barbara Blomberg, who bore him a son, Don John of Austria, in February 1547.

The town of Heilbronn was part of the Schmalkaldic League, along with other Protestant towns and princes, in an attempt to join forces against the troops of Charles V. The Schmalkaldic War broke out in 1546 when Charles decided that he had to stamp out the Lutheran "heresy" in German lands; he defeated the League and some towns, including Heilbronn, decided to try to make peace with Charles to avoid punitive measures. A delegation from Heilbronn met with Charles in Schwäbish Hall, and our annotator was one of those who went to plead the town's case to Charles. He says (on p2) that the "truly demon-possessed Saul of the Germans" (Germanorum Saul αλυθεως δαιμονιξομενος) interrupted his reading on 29 August 1546; presumably the latter comment was written in Greek to avoid it being read by most of his contemporaries.

German scholar in the duchy of Württemberg, early annotations; bought at Jena in 1706 by Johann Georg Joch (theologian, 1676-1731); Bequeathed to the Bishopric of Cornwall by the Rev. Franke Parker, M.A., Rector of Luffincott, Devon, 1883, bookplate

The Rev. Franke Parker (1803-1883) was the rector of a small parish in west Devon and an avid book collector from an early age. He bequeathed his substantial library of more than 7,000 volumes to the Phillpotts Library in Truro. He also owned the first and second Latin editions of Josephus (1470 and c.1475, sold in these rooms, 5 June 2007, lots 13 and 14).