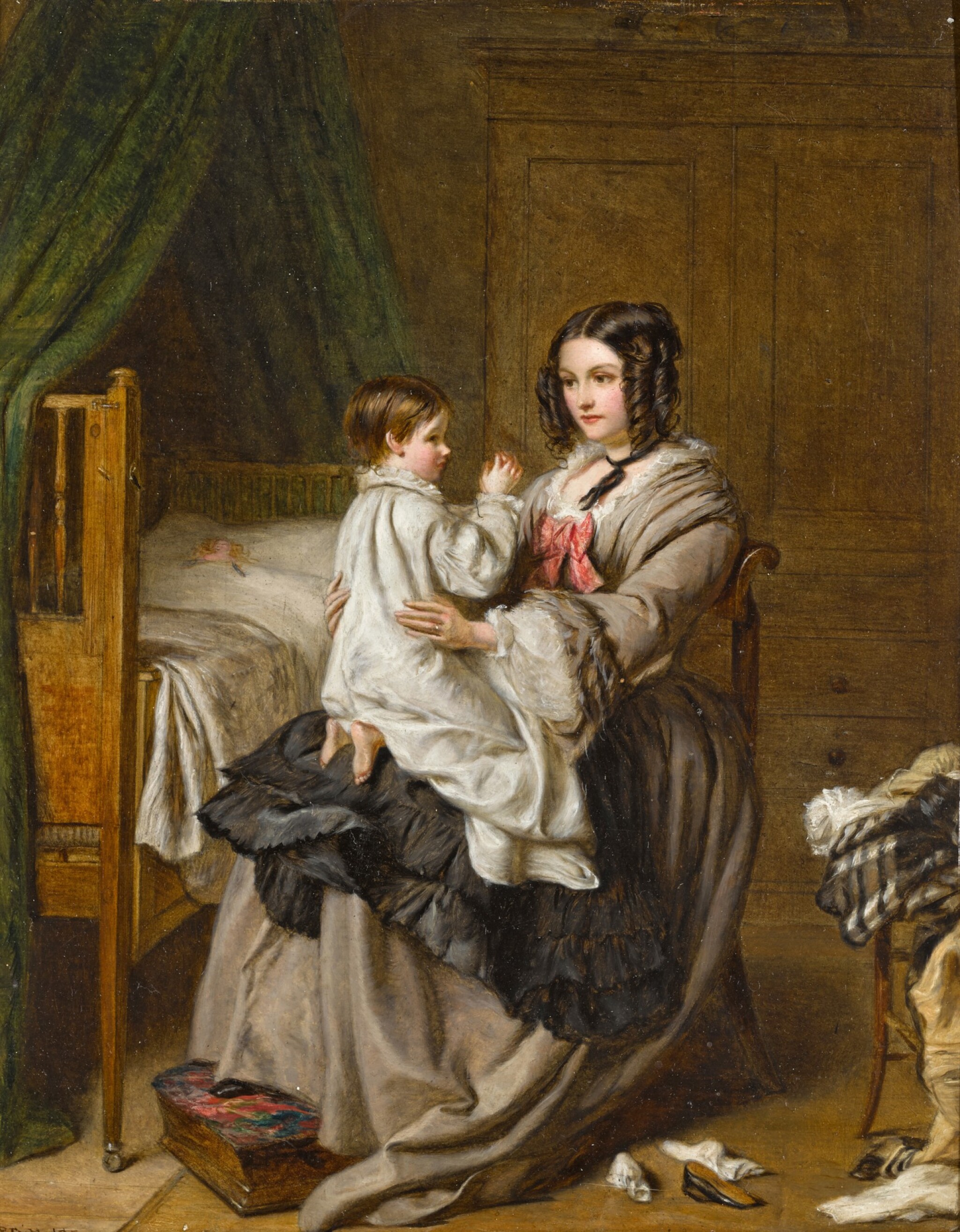 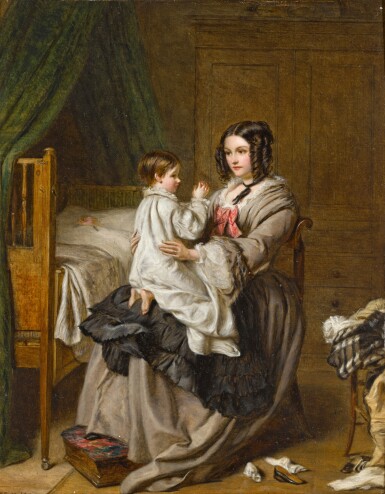 The original panel is flat and providing a stable structural support. There are no signs of craquelure. There are faint frame abrasions at the extremities but the picture is clean and ready to hang.

There are two localised areas of retouching in the top right corner and very minor, flecked retouching's to the woman's sleeve.

The present picture is a replica of Frith’s When we devote our youth to God, better known as Bedtime a charming scene of a mother and child painted by Frith in 1852. He began it early in that year and according to the artist, it was his first attempt at depicting contemporary life rather than the historical genre paintings he had painted to this date. ‘The desire to represent every-day life took an irresistible hold upon me’, he wrote. ‘My first venture in modern-life subjects took the shape of a small picture of a mother and child. The child was kneeling, saying its prayers in its mother's lap, with the wandering attention so common to children. The gray -and -black dress of the mother and the white night-gown of the child made a sufficiently agreeable arrangement of negative colours.’ (William Powell Frith, My Autobiography and Reminiscences, in three volumes, Bentley & Son: London 1887-8, volume, I, p.218)

In his autobiography, Frith deliberately omits the details of his private life and fails to mention that, ‘the portraits are those of the then young artist’s wife and little child.’ (Godfrey Wordsworth Turner, Homely Scenes from Great Painters, London 1871, ‘BED-TIME,’ p.125) In early 1852, Frith had three children, Isabelle (aged 5), ‘Cissie’ (aged 4) and William (aged 1) and this painting depicts Frith’s wife Isabelle holding one of their daughters - It is uncertain whether it is Isabelle Oppenheim or Jane Ellen Panton (‘Cissie’).

Even before the painting was completed Frith knew that the painting would be a success and he wrote to his patron Thomas Miller in March 1852 asking: ‘- perhaps you will be so good as tell Mr. Newsham – the other is a kit-cat a mother putting her child to bed it is saying its prayers kneeling in her lap & will I think be very successful.’ (William Powell Frith to Thomas Miller, March 14, 1852, Royal Academy Library)

On its completion it was exhibited in the Royal Academy and given the title of the children’s hymn being recited by his daughter:

‘When we devote our youth to God,

'Tis pleasing in his eyes:

a flower, when offered in the bud

is no mean sacrifice.’

The painting was well received by critics and praised for it naturalness and lack of affectation. ‘The subject is not in the least idealised,’ commented the Morning Chronicle, ‘it is enacted every evening in every middle-class family, and Mr. Frith has put it upon canvas with the fidelity of a daguerrotype. A merino gown and a black silk apron were never better painted.’ (Morning Chronicle, 17 May, 1852.) The details of everyday life and beautifully rendered, which was also noted by commentators: ‘the dress of the mother, which is faultless, whilst the idea of the doll stuck on the pillow is perfectly natural.’ (Bell’s Weekly Messenger, 15 May, 1852) In this carefully and lovingly evoked scene of domestic life there is a brief glimpse of the ‘modern life’ painting was to develop to a full social panorama, two years later in Ramsgate Sands.

The painting’s obvious charm led to Frith being persuaded to make replicas, including a version that has remained within the family. This version was painted in 1858 for Thomas Agnew of Manchester and its small scale is particularly charming being both exquisitely painted and retaining all the details of the scene portrayed.