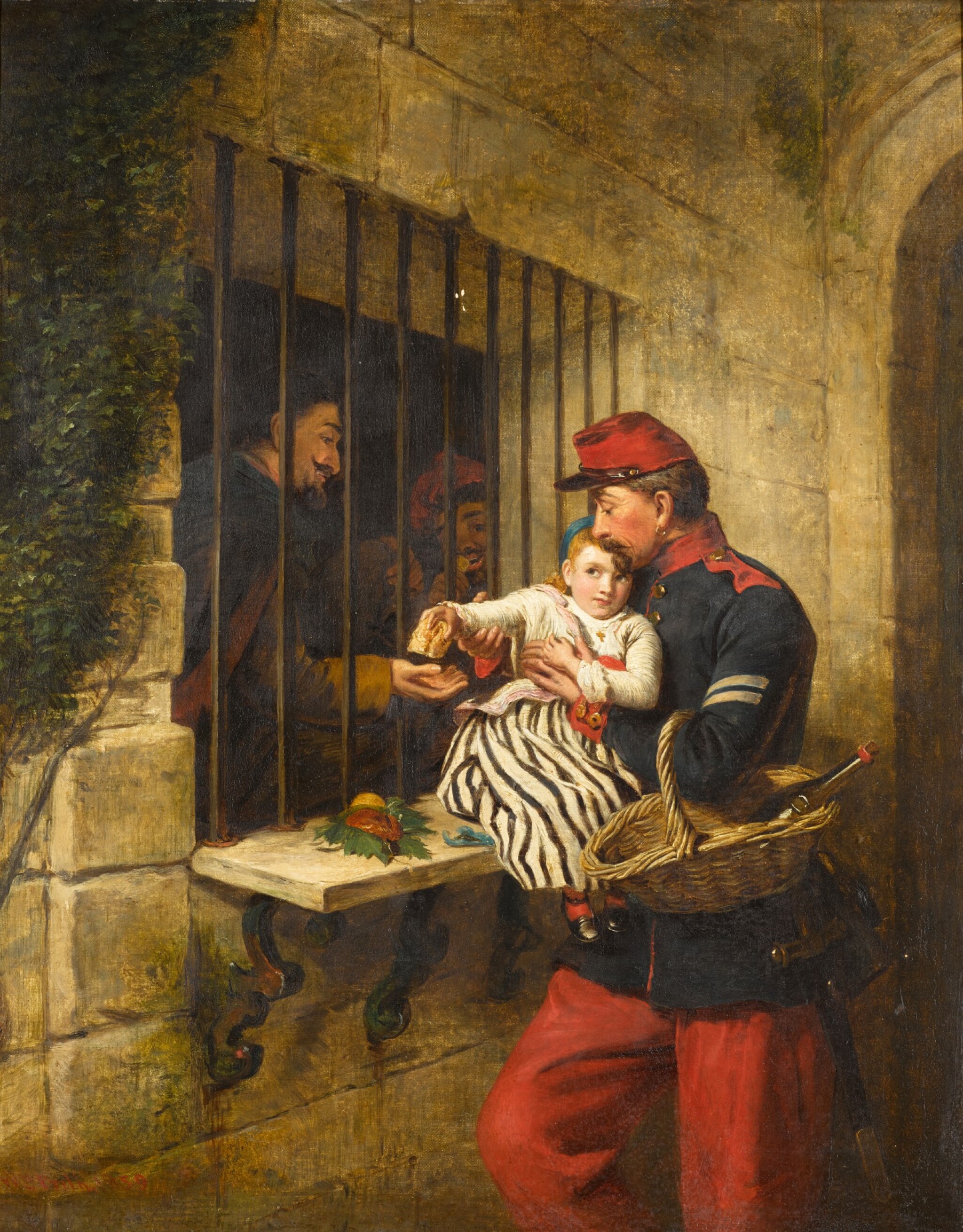 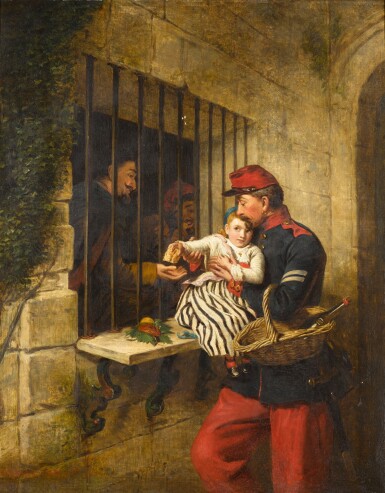 oil on canvas in original frame

This picture is unlined and the original canvas is providing a stable structural support. There are faint frame abrasions at the extremities but so signs of craquelure. there are a couple of small splashed on paint at the top of one of the central bars of cell.

There is an opaque and uneven varnish but no obvious retouchings other than perhaps a few minor retouches to the edges of the picture and very minor flecked retouchings in the background (these may simply be dirt).

‘"Stay!" said the jailer, putting his little daughter on the outer ledge of the grate,

The child put all these things between the bars into the soft, smooth, well-shaped hand, with evident dread—more than once drawing back her own, and looking at the man with her fair brow roughened into an expression half of fright and half of anger.’

Charles Dickens (from the opening chapter of Little Dorrit)

As a result Frith painted two works for the frontispieces to the two volumes of Little Dorrit. The first, this painting, depicts the opening chapter of Dickens’s novel, ‘Sun and Shadow,’ which uses the imagery of light and darkness, and the setting of Marseilles where ‘there was a villainous prison.’ Frith takes the very specific location to be that of Château d'If, an island fortress off Marseilles used as a prison in the nineteenth century until its closure in 1890 and the setting of The Count of Monte Cristo. The great stone blocks, window and arch evoke the courtyard of the prison, whilst the jailer is in 1850s uniform of a corporal in the French infantry, reflecting its use form the major internment of political prisoners. The scene shows the jailer’s daughter feeding her father’s ‘birds,’ the prisoners Rigaud and John Baptist.

Frith notes that this painting was immediately ‘snapped up’ by the dealer Louis Victor Flatow (1820-1867) who bought it directly from the artist and immediately put it on public exhibition. In October 1859 a winter exhibition of Modern Pictures was held at Leggatts New City Gallery, No. 19, Change-alley. Flatow knew that the public’s enjoyment of Dickens and Frith meant that the painting would be instantly popular.

The London Daily Times noted that of the two scenes Frith exhibited from Little Dorrit this painting of Marseilles ‘is decidedly the best,’ finding a ‘touchingly natural incident,’ in the French prison scene. (London Daily News - Thursday 20 October 1859) The Illustrated Times and its readers had a long fascination with Frith’s paintings and they decided to celebrate the painting with a short commentary and a large full-page wood engraving by the distinguished engraver William Luson Thomas (1830-1900). (William Luson Thomas was the founder and editor of the Graphic, which began late in 1869)

After its sale the picture remained in private hands and was never put on public exhibition. Even though it was a well-known image in 1860 and was engraved twice, it remained unknown, because it appeared an unfamiliar subject for Frith. After one hundred and sixty years it is now recognised as the important work it is in Frith’s canon and within Dickens’s involvement with fine art.

A small study for the work was made and was sold at auction in April 2016.