The history of Europe is carved into its crucifixion scenes. Very early crucifixion scenes are rare. The earliest is a piece of Roman graffiti from around 200 AD, now on display at the Palatine Hill Museum in Rome. It is a slur scratched in plaster, depicting Christ as a crucified donkey worshipped by a local fool. Gems engraved by clandestine groups of heretical Christians are the only other known examples from the second and third centuries. Early church leaders knew the horrors of crucifixion and saw it as an unfit subject for art. Instead, they focused their devotion on images of triumph and resurrection.

It was in the Middle Ages that crucifixion scenes became widespread. European pilgrims to the Holy Land brought back small metal flasks used for carrying oil, and mass-produced souvenirs decorated with images of the crucifixion. At the same time, ivory reliefs featuring crucifixion scenes were being produced in Italy. Christianity had become the dominant religion in Europe and the cross was becoming a symbol of devotion.

In France, crucifixion scenes began to appear on Limoges enamel, a distinctive technique developed by goldsmiths in the Benedictine abbeys of central France during the 12th century. The technique was based on the ancient champlevé process of engraving shallow beds in copper. Compositions were mostly used for private prayer, and many were based on engravings from northern Europe.

Among the innovations of the Limoges workshops was the development of painted enamel from around 1470, which allowed for highly detailed figurative scenes. At first, these were high-status objects for high-status individuals – wealthy art collectors or members of the court – and featured mythological or secular imagery. Within a generation, however, many Limoges craftsmen had converted to become Huguenots and focused their attention on the crucifixion once again.

Painted enamel brought devotional scenes to life in vivid colour. Some even saw the process of firing the works as a reflection of the refining fires of purgatory. The compositions are often quite simple, highlighting the subtleties of the figures within them. In some, bystanders reach their hands towards the slumped figure of Christ.

In others, framed by the cruel geometry of the cross, the Virgin Mary and St John can do little but stand and pray. Background detail recedes in deep blues, greens and blacks as the blood-red pours from Christ’s side. Bold but never didactic, the Limoges crucifixions display humanity in its brutality and its tenderness. 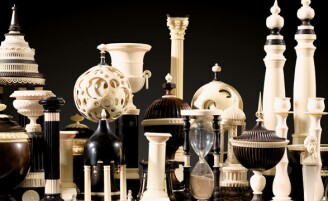