The Art of Defense, a History of Samurai Helmets

By Ian Bottomley, Curator Emeritus, The Royal Armouries, Leeds
Sotheby's sale The Samurai: Japanese Arms and Armour , opening on April 30, will feature a remarkable collection of Japanese arms and armour, including this group of exquisite samurai helmets.

J apan is unique in being a country that endured more than a thousand years of internal conflict during which the members of the warrior class fought, not for the throne, but for control over it. It was these aristocratic combatants, popularly known as samurai, who demanded weapons and armour of a quality that reflected their status. As is evident from the helmets offered here, the levels of artistry and craftsmanship the armourers achieved has rarely been equalled, and never bettered.

Japanese helmets or kabuto consist of a helmet bowl or hachi to which is attached a neckguard or shikoro. Early examples have an almost hemispherical bowl of about ten iron plates arranged like the gores of a cap fastened together with domed rivets. At the apex is a large hole or tehen through which was pulled the excess of a tall soft cap worn in lieu of lining. In front is a small almost vertical peak, arranged so as not to catch the bowstring when shooting, and was often adorned with horn-like crests.

The neckguard was assembled from rows of small lacquered, overlapping scales of iron or rawhide fastened together with leather thongs that in turn were laced to each other with silk braid. A characteristic feature of these early neckguards was that the front ends of the upper rows were extended and turned outwards on either side of the face as a defence against arrows. These features, known as fukigaeshi, continued to be added long after they had become redundant, shrinking in size until they became little more than tabs that acted as vehicles for the wearer to display his heraldry.

Over the next centuries this general form of the helmet remained largely unchanged other than the number of plates in the bowl increased whilst the size of the rivet heads decreased, and the neck guard became less conical (Lot 18). By the 15th century the old hemispheric helmet bowl had given way to one that was more egg-shaped in plan, swelling out at the rear to fit the head better. The rivets were now countersunk under the lacquer and the edges of the plates were turned up to form a small flange covered by a gilt rim that added to the stiffness. 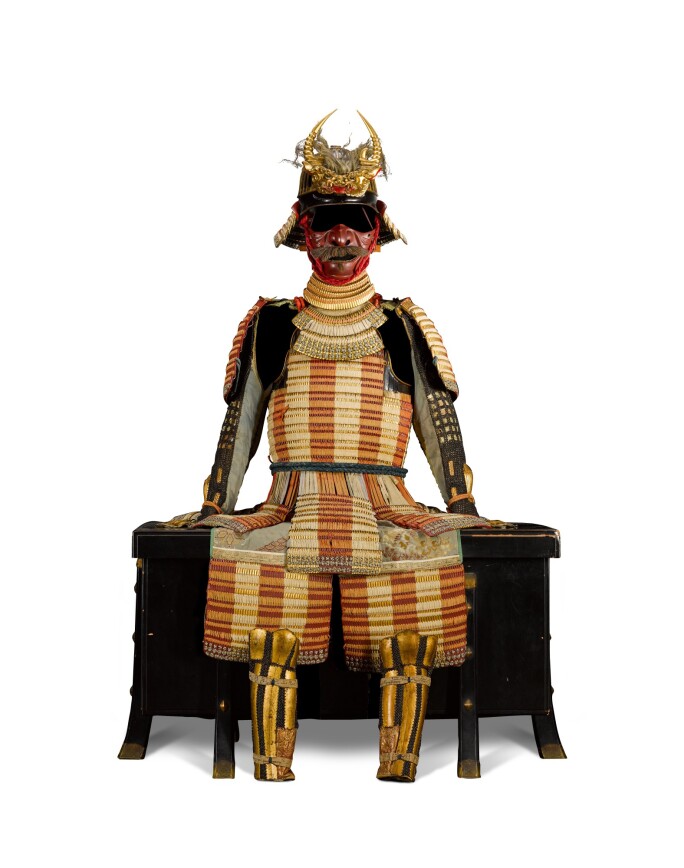 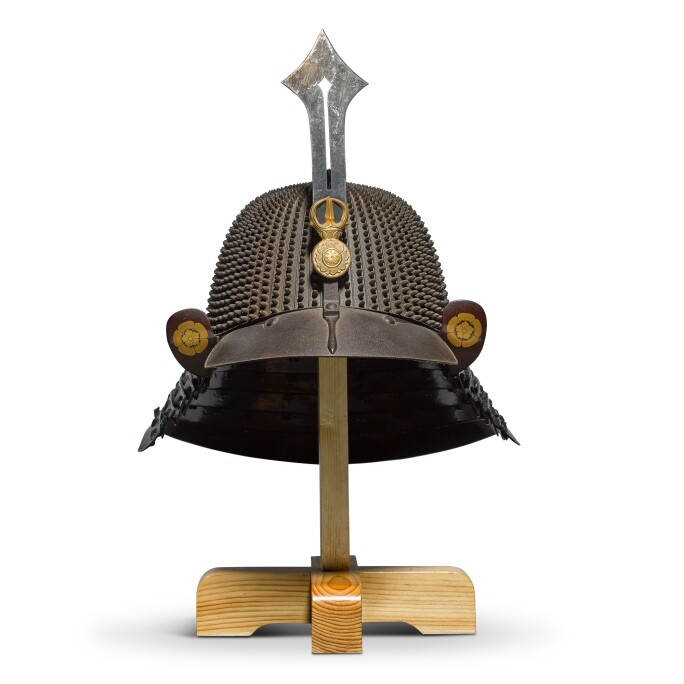 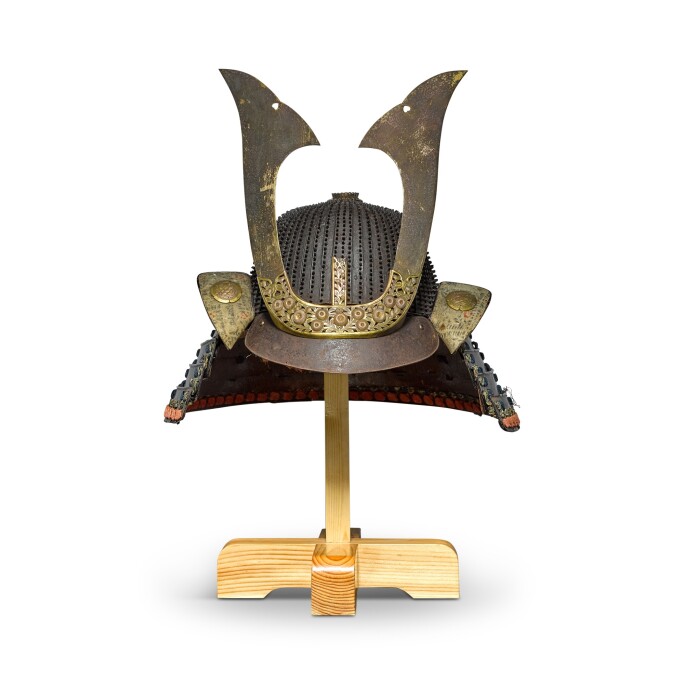 The final development of these multiplate helmets, usually of 32 or 62 plates, was a bowl with steep sides, some being flat on top, others being raised the rear or dipping in the middle. Most had the rivets countersunk, but some had each plate adorned with around 20 pointed rivets that decreased in size as they neared the tehen (Lot 10 & 13).

By the end of the 15th century fighting intensified heralding some 130 years of civil wars and social upheaval. The increased demand for armour led to improvements in metal production. As larger iron plates became available the armourers were less constrained by their raw material leading to fundamental changes to the way helmets were made. Scale neckguards gave way to those of plate, often with the minimum of lacing that was both easier to keep clean and dry out on campaign. Using larger plates, helmets appeared in a profusion of styles and shapes, frequently embellished with gilded crests applied to the front, sides, top or rear of the bowl (Lot 9). 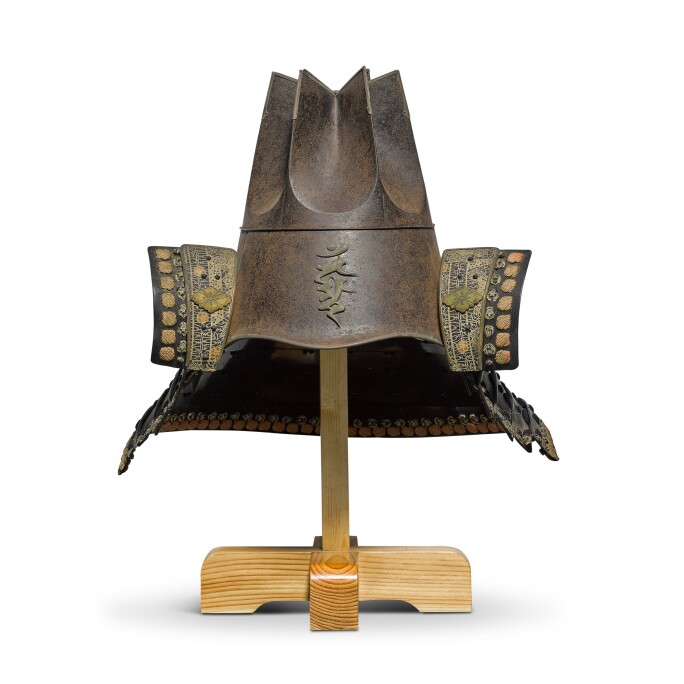 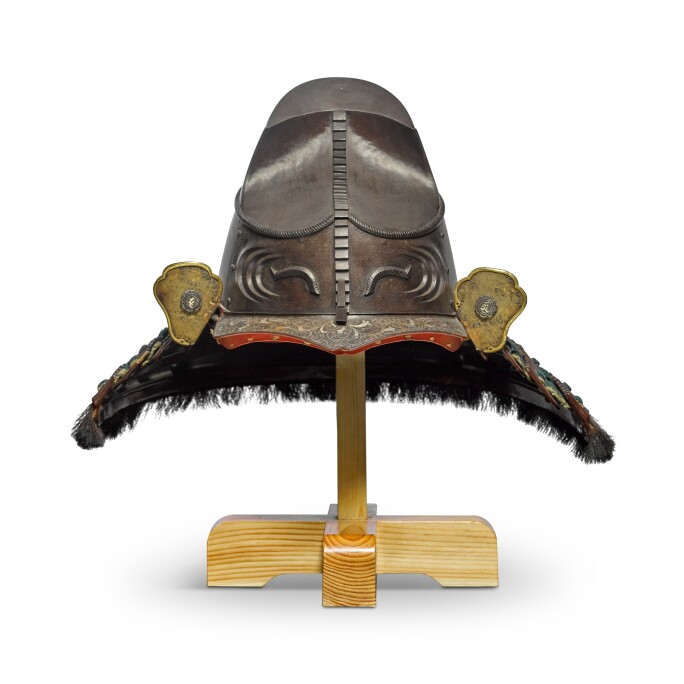 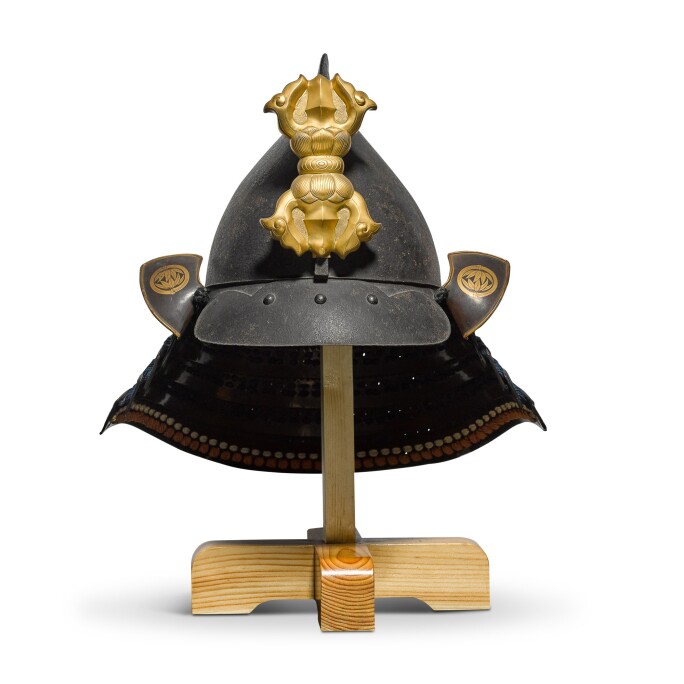 One important style of helmet that appeared at this time was called a zunari kabuto or ‘head-shaped helmet’ that had a wide plate over the top of the head with a plate each side and a brow-plate that curved out at the bottom to form a peak. Other helmets might imitate court caps, civilian headwear, plant or animal forms, inanimate objects or be covered with hair. Any helmet which was not of conventional multiplate construction was known as a kawari kabuto or ‘novel helmet’ (Lot 7 & 8). It was about this time that helmets began to be signed by their makers. For the first time scholars could identify the characteristic forms of helmets made by groups such as the Haruta, Iwai, Myochin and Saotome.

Following the unification of the country in the early 1600s and the enforced peace that followed, the importance of armour declined, although the samurai were still required to own armour and weapons and to practice martial arts. This situation changed in the late 18th century when, in a mood of nostalgia, the samurai yearned for the glories of their past. Books were published describing old styles of armours and helmets and armourers were commissioned to reproduce them.

At first, they were ludicrous pastiches but soon perfect copies of helmets that had been in vogue eight hundred years earlier were being made for the wealthy. This revival was however not to last. The opening of Japan by the Americans after some 250 years of isolation was to lead to the abolition of the feudal system. Armour was now redundant and many of the samurai, too proud to work, resorted to selling their once treasured armours and weapons to become curios to be bought by the ever-increasing number of tourists. 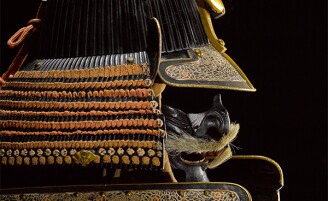