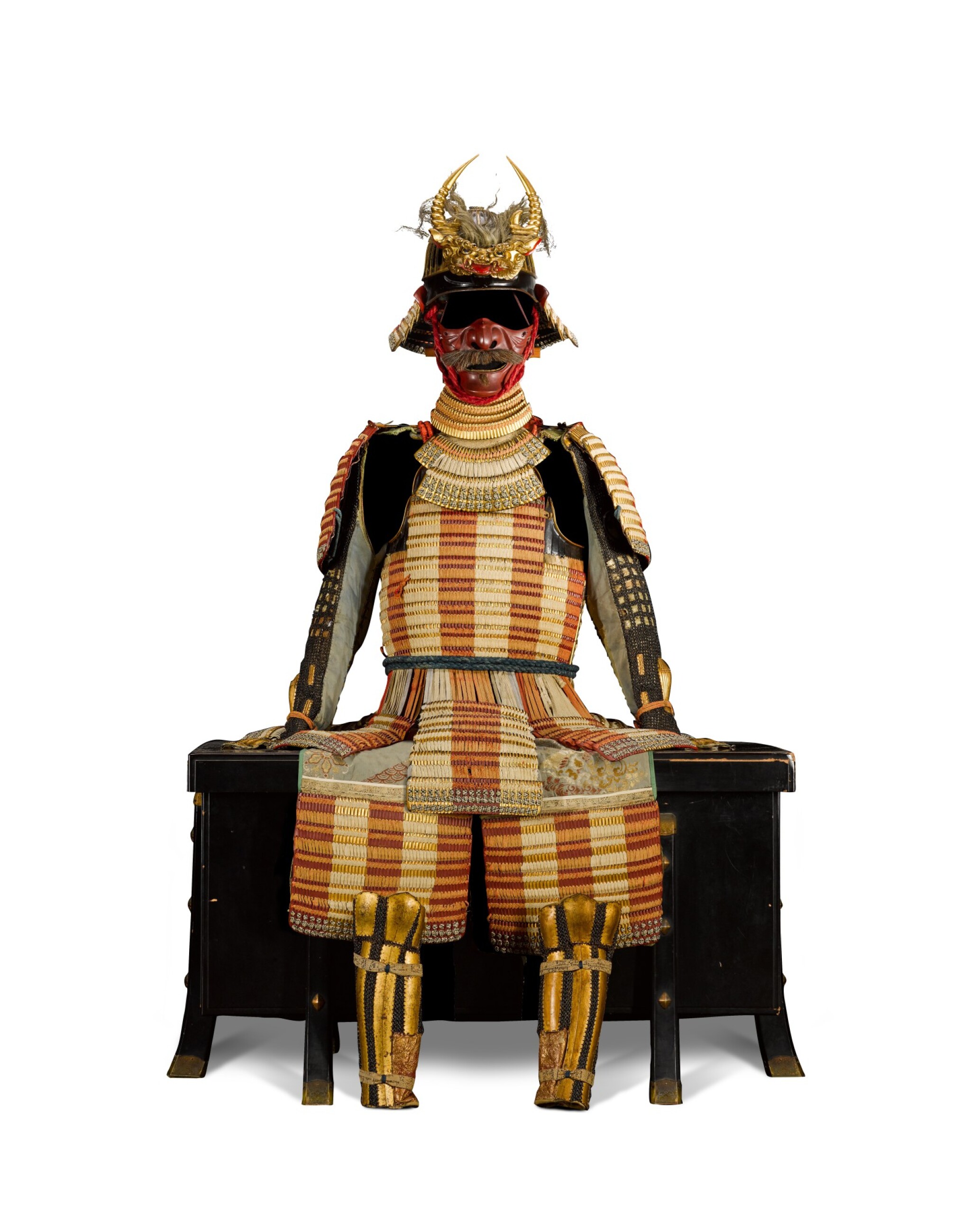 the akoda-nari suji bachi kabuto with thirty-two plates, slightly raised to the back of the crown, fitted with gilt-metal fukurin to all the ridges and pierced with boar’s eye (inome) openings, three-stage tehen kanamono in the form of a chrysanthemum, the four tier shikoro [neck guard] in vertical bands of red and gold lacquer, laced with closely spaced kebiki odoshi in alternating red and white braid, the later red and gold lacquer maedate [forecrest] in the form of an oni with two large horns, the red lacquer mempo with open mouth, broad horse bristle moustache and chin tuft, gilded teeth, four-tier yodare-gake [throat protector], the do [cuirass] in two sections, all in honkozane [true lamellae] in alternating vertical light red and white bands consistent with all other parts, applied with nanatsuboshimon [Seven Luminaries crest], two-tiered nodowa [throat guard], seven tier sode [shoulder guards] with the right sode in red lacquer and light red braid, the left in gold lacquer and white braid, the mail kote [sleeves] pierced to each with aoi mon [hollyhock crests], six tassets of five-tiered kusazuri [skirt], the underskirt decorated with bands of seigaiha, large floral heads and sprays, with shinosunaete [shin guards], accompanying later black lacquer karabitsu [storage chest]

Overall, in good condition. The kabuto with some cracking to black lacquer, wear to odoshi braid, some chips to lacquer of honkozane. The forecrest with some old wear to gold and red lacquer, one horn of oni with some restoration. The mempo with slight old wear. The nodowa with slight chips to honkozane. The reverse of the cuirass with some old wear and damage to the lacquer. The sode with old wear to lining, some cracks to lacquer. The underskirt with some minor wear to lacing, otherwise good condition. The shin guards with some restoration to the lacquer of the metal plates. The accompanying Meiji period black lacquer karabitsu with some wear and minor chips to the lacquer, consistent with age and use.

The armour suit with two family crests (kamon) present: under the throat guard (nodawa) are two adjacent Seven Luminaries crests (nanatsuboshi mon) in gold, and hollyhock crests (aoi mon) can be seen on the sleeves. Both kamon have been used by various clans, with this version of the aoi mon attributable also to the Honda Daimyo.