New York
Jan Lievens’s A Woman Embraced by a Man, Modelled By Friend and Rival Rembrandt van Rijn: Estimate $4/6 Million
Giovanni Battista Tiepolo’s The Madonna of the Rosary with Angels: The Last Major Altarpiece by the Artist in Private Hands, Unseen on the Market for 30+ Years, Estimate in Excess of $15 Million
A Newly Rediscovered Masterwork by Sir Peter Paul Rubens: The Virgin and Christ Child, with Saints Elizabeth and John The Baptist, A Critical New Addition to the Artist’s Scholarship, Making Its First Appearance at Auction since 1946, Estimate $6/8 Million
Two 18th-Century Venetian Masterworks by Canaletto & Francesco Guardi Offered on Behalf of The Metropolitan Museum of Art
One of the Only Known Portraits by Artemisia Gentileschi, Estimate $800,000/1.2 million
SOTHEBY’S MASTERS WEEK EXHIBITIONS OPEN TO THE PUBLIC 24 JANUARY

NEW YORK, 20 December 2019 – Sotheby’s is pleased to unveil highlights from our Master Paintings Evening Sale on 29 January in New York. Led by the last major altarpiece by Giambattista Tiepolo in private hands, the 74 paintings on offer will open for public exhibition in Sotheby’s York Avenue galleries beginning 24 January, as a highlight of Sotheby’s annual Masters Week auctions.

PAINTINGS FROM THE COLLECTION OF J.E. SAFRA

A selection of works from the extraordinary private collection of J.E. Safra will be offered across Sotheby’s Masters Week sales, comprising Dutch, Flemish, Italian and French pictures. The group is led by Jan Lievens’s early masterpiece, Woman Embraced by a Man, Modelled by the Young Rembrandt, in which the revered Dutch Old Master serves as the model for the young gentleman pictured in the work (estimate $4/6 million).

The oil on canvas was painted in 1626-1627, when Lievens was only around 20 years old, yet already established as a fully-fledged and commercially successful artist working in his native Leiden. Despite his youthful age, he was developing as a highly skilled and inventive technician at a rapid pace – so much so that he was largely considered to be more talented than his principal rival, Rembrandt.

Born in Leiden just over a year apart, both artists studied with the same master and lived near one another, yet Rembrandt’s posthumous fame as the greatest artist of the Dutch Golden Age has left Lievens largely in the dark. The two artists certainly learned from one another, to the point that some contemporaries found their works hard to distinguish. They also shared models – and even used one another as models in their compositions. Arthur Wheelock, former curator of the Northern European Art Collection at the National Gallery of Art, has argued that the young man in the present painting is Rembrandt, based on his resemblance to other works form the same period thought to feature the Dutch master. The present work comes to auction 10 years after its inclusion in the National Gallery of Art’s show Jan Lievens: A Dutch Master Rediscovered.

Additional highlights from the Safra collection include: a monumental canvas of Granida and Daifilio by Dirck van Baburen, considered to be the earliest treatment of this subject in Western art (estimate $1/1.5 million); a wonderfully theatrical canvas of Boethius and Philosophy painted by Mattia Preti (right, estimate $1.5/2 million); and a classical capriccio of classical ruins depicting the Maison Carrée at Nîmes, the Temple of Vesta at Tivoli, the Pont du Gard near Nîmes and the Borghese Vase by Italian 18th-century painter Giovanni Paolo Panini (estimate $600/800,000).

VENETIAN MASTERWORKS FROM THE METROPOLITAN MUSEUM OF ART

The sale is further distinguished by two major works from The Metropolitan Museum of Art, New York, sold to benefit the Acquisition Fund. Canaletto’s Venice, A View of The Grand Canal Looking East with Santa Maria Della Salute is a majestic bird's-eye view of the landing stage in front of Santa Maria della Salute, which was likely painted in circa 1740, during the height of Canaletto's Venetian period (estimate $3/5 million) The warm sunlight and clear shadows evoke a peaceful afternoon on a clear day, as gondolas and merchant ships populate the Grand Canal and Venetians stroll in and out of the church, which is dedicated to the city's survival of the plague.

Datable to circa 1780, Capriccio View of a Venetian Campo is a masterful example of Francesco Guardi’s skills in creating enchanting and convincing views from an assortment of invented components (estimate $200/300,000). Within this imagined corner of Venice, his genius is evident in the virtuosity of his brushstroke and poetic dynamism – both employed here to conjure up the true essence of the city. Canaletto completed this painting in 1765 as a reception piece for the Venice Academy, and it was first publicly exhibited in Saint Mark’s Square in 1777 on the Feast of the Ascension.

THE LAST MAJOR ALTARPIECE BY TIEPOLO

The Evening sale is led by Giambattista Tiepolo’s The Madonna of the Rosary with Angels, which is the last major altarpiece by the Venetian artist in private hands. Painted in 1735, The Madonna of the Rosary with Angels is a mature early work, dating from a period that is considered Tiepolo’s best and one that brought him recognition as the greatest painter of 18th-century Europe. Major works of such astounding quality by Tiepolo are rare on the international market, for much of his work was carried out in frescoes and altarpieces that remain in situ or are located in museums. Estimated in excess of $15 million, the monumental painting is the largest and most valuable offering of the artist's work to come to market. Separate release available.

The auction features Sir Peter Paul Rubens’s The Virgin and Christ Child, With Saints Elizabeth and John the Baptist (left, estimate $6/8 million), a newly rediscovered masterwork that has been in private collections since 1946 when it was last sold at auction. The painting was not widely known to scholars and researchers and was not previously recorded in the official Corpus Rubenianum Ludwig Burchard. Through research led by Sotheby's Otto Naumann, the painting will now appear in a forthcoming Rubenianum volume, and is believed to be the prime version of the painting. A well-known workshop version, which is part of the Thyssen Collection in Spain and is believed to have been painted circa 1618, has many subtle variations in style that are attributed to the inclusion of Anthony van Dyck in Rubens' workshop. The present painting is believed to be an earlier version, circa 1612, and is a major discovery that establishes the painting's place in Rubens’ officially recognized body of work. Separate release available

The January sale also offers Rubens’s The Last Supper, En Grisaille, an extraordinary sketch appearing at auction for the first time since it was purchased by the present owner more than 35 years ago (estimate $1.5/2 million). Executed mainly in grisaille, the work was made in preparation for an engraving by the printmaker Boëthius A. Bolswert (1580-1633), which reproduced the composition of Rubens’s altarpiece for St. Rombouts Cathedral in Mechelen. Grisaille sketches like this played a role in disseminating and protecting Rubens’s ideas for major compositions, because the wide distribution of ensuing prints would act as a de facto copyright over his designs.

A RARE PORTRAIT BY ARTEMISIA GENTILESCHI

Ahead of the major monographic exhibition of the work of Artemisia Gentileschi, which opens in April 2020 at the National Gallery in London, Sotheby’s is pleased to offer two paintings by Europe’s most famous female Old Master. Painted circa 1626-37, Portrait of a Gentleman is a rare portrait by the artist, who is often known for her depictions of women in biblical, mythological and historical narratives (right, estimate $800,000/1.2 million). Dressed in traditional French military garb, the sitter is likely the French military engineer Antoine de Ville, whose likeness is known through an engraving by Jerome David, who Artemisia may have met in Rome through the Accademia dei Desiosi. Since the present work last appeared at auction in 2007, cleaning has revealed that the artist cleverly added her initials AG to the elegant Genoese lace on de Ville’s collar – a detail so subtle, that it went unnoticed for many years.

Sometimes presented by scholars as a proto-feminist, Artemisia reveled in depictions of female heroines such as Judith and Sisera, as well as more traditional subjects such as Cleopatra, Danae, and female personifications of allegories. In Bathsheba at her Bath, the heroine is at her toilet, attended to by two maid-servants (estimate $600/800,000). Painted in the 1640s at the height of her maturity, this impressive, full-scale depiction successfully combines two of Artemisia’s career-long interests: the magnificence of the female form and the voluminous depiction of sumptuous fabrics, particularly in evidence in Bathsheba's yellow drapery. 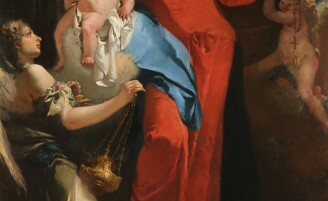