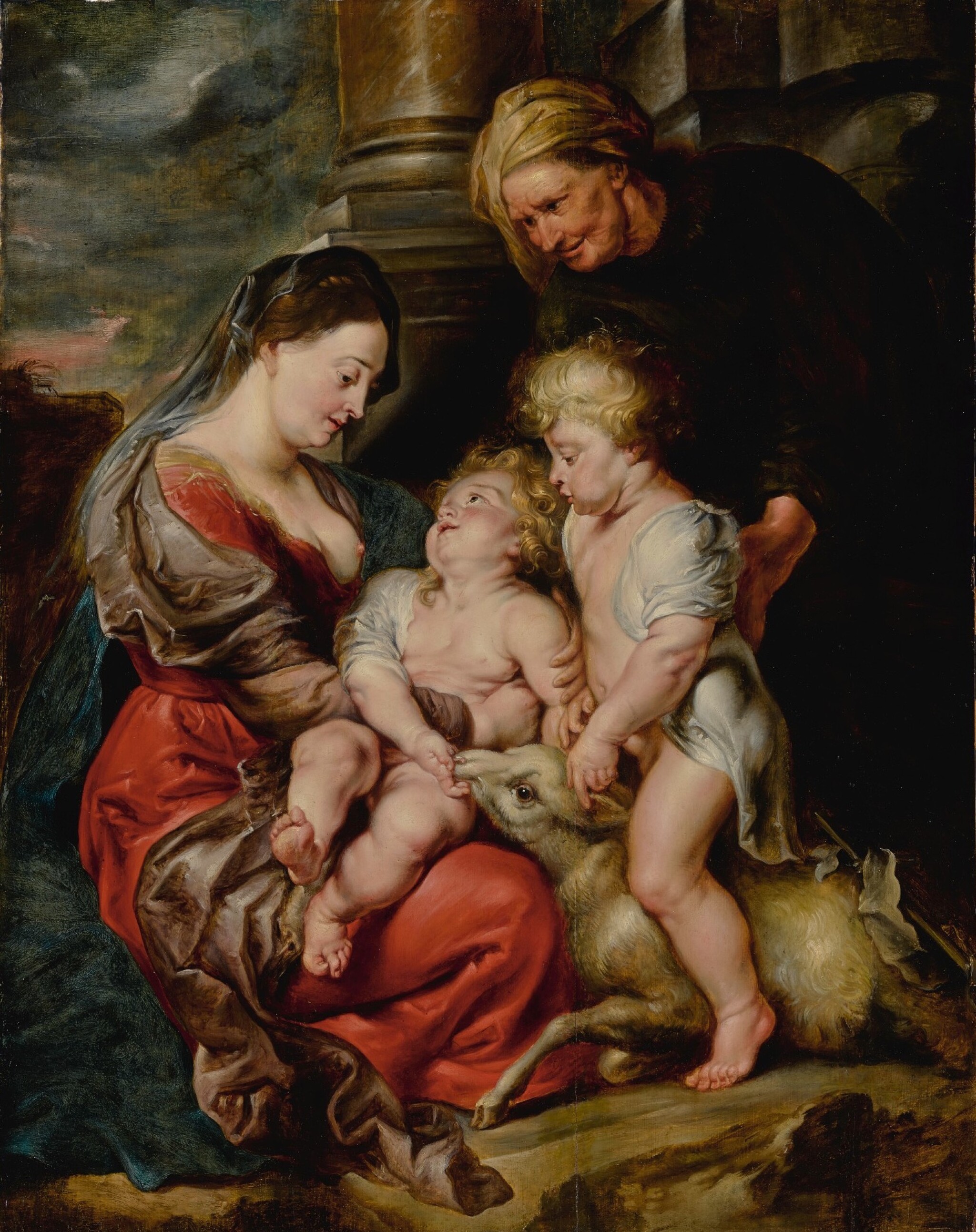 THE VIRGIN AND CHRIST CHILD, WITH SAINTS ELIZABETH AND JOHN THE BAPTIST

Thence by descent to Felix Kuranda, by 1906;

Thence by descent to Hedwig Kuranda;

Thence by descent to his wife, Mrs. Hedwig Kuranda;

Thence by descent to the present owners.

New York, Wildenstein Galleries, A Loan Exhibition of Rubens: Under the High Patronage of his Excellency Baron Robert Silvercruys,

Recently rediscovered, this powerful depiction of The Virgin and Christ Child with Saints Elizabeth and John the Baptist is an early work by Sir Peter Paul Rubens, datable to circa 1611-1614. Upon seeing the painting in the early 1950s, a few years after it last appeared at auction, Ludwig Burchard, the great connoisseur of Rubens' art, declared it to be the prime version of this popular subject, known through many workshop versions and copies.1  For the last few decades, the painting remained in a private New York collection, unseen by the wider scholarly community of Flemish art. It is fortuitous that the painting should resurface now in time to be included in the multi-volume catalogue raisonné devoted to Rubens’ paintings and based on Burchard's notes and files, the Corpus Rubenianum Ludwig Burchard, which is nearing completion. The present work will be discussed in the forthcoming volume IV: The Holy Trinity, The Life of the Virgin, Madonnas, The Holy Family. Fiona Healy, the author of this volume, and Arnout Balis, Chairman of the Centrum Rubenianum, have both recently studied this lot firsthand and regard it as a genuine work by Peter Paul Rubens.

In his examination of the painting, Burchard noticed what he perceived as numerous pentimenti, due to the heavy application of paint in certain areas, which he thought covered changes in the composition and arrangement of figures. Modern technical imagery, however, reveals few changes to the visible painted surface. This is not unusual for original paintings by Rubens, because often he worked out multi-faceted compositions in his mind; his process of thinking is sometimes revealed through preparatory drawings and sketches. Direct studies for the present composition, if there ever were any, do not survive. There are, however, two related drawings of The Virgin and the Christ Child, the Infant St John the Baptist and the Lamb (fig. 1). Although these are probably copies after original sheets by Rubens, nevertheless, they reveal the artist’s earlier thoughts about such an arrangement of figures.2 In the drawing on the left, the Virgin, the Christ Child and the lamb all appear in the same relative positions as in the completed painting.

Amongst the most notable workshop repetitions of the present subject is a painting in the Thyssen Collection in Madrid (fig. 2), presently on long-term loan to the Museum of Catalan Art in Barcelona. In the most recent catalogue of the Thyssen Collection, their painting is described as an “autograph replica datable c. 1618… possibly executed with studio assistance.”3 In fact, this dating might be accurate, which prompts the question of when Rubens’ original would have been executed. It is proposed here that the present painting is much earlier in date, possibly executed three to six years after Rubens returned to Antwerp from Rome in 1608. It bears many parallels with other works dated to these first years back in Antwerp, such as the Sampson and Delilah of 1609-10 (fig. 3)4 and the Massacre of the Innocents of circa 1611-12 (fig. 4).5 To see the connection between the present work and these early Antwerp examples, one need only compare the treatment of the red cloth in each. The early dating of the present work is further supported by an analysis of the age of the three panels that make up the painting, and dendrochronologist Peter Klein has concluded that "a creation is plausible from 1610 upwards."6

In the mid-1620s, Rubens devised many brilliant compositions for major paintings, and it is believed he sought out printmakers to execute copies in order to protect his inventions and to dissuade other artists from adopting his designs. The modern concept of copyright did not exist in the early 17th century, and the privileges protected by these prints extended only to the engravings themselves. Yet, these prints had the same practical effect as copyright, for through their wide dissemination, they served to protect designs from imitators.7   It was probably around this time that Rubens employed Scheldt A. Bolswert to execute a print after the painting considered here as opposed to the Thyssen version (fig. 5). The printmaker faithfully copied an incongruous piece of the Virgin’s wrap, just to the left of the Christ Child’s proper right leg, while this element has been transformed into a single flowing piece of cloth in the Thyssen version. Another difference to note in this reproductive print is that more of the sky and architecture is visible at the immediate top of the composition. Evidently, at some point in its history, the painting was trimmed on its top edge, probably to fit into a preexisting frame. This slight trimming does not compromise our appreciation of the painting, its tightly woven composition, and its vibrant and well-preserved paint surface.

It has often been observed that Rubens strove to be an Italian painter in Antwerp, and indeed the subject of this painting harks back to Italian prototypes. This scene is so common in Italian art that it comes as somewhat of a surprise to learn that it is not described in the gospels. Instead the subject matter derives from a popular apocryphal text, the Meditationes vitae Christi, a Franciscan homily attributed to St Bonaventure:

Here [in Nazareth] too, we may suppose, that St. John the Evangelist [sic], who was then about five years old, often came to visit our Lord, accompanied by his mother, who was sister to the Blessed Virgin.8

Rubens need not have consulted this text, because he could have drawn inspiration from numerous artistic sources. For instance, he must have known Leonardo's rendering of the same subject or Giulio Romano's example (fig. 6), which was acquired as a Raphael in 1604 by Rubens’ Italian patron, the Duke of Mantua. The picture was later entitled “La Perla” after it was purchased by Phillip V of Spain, who considered it “the pearl” in his collection. It remains today in the Prado.9

Although there are no surviving oil sketches made in preparation for this painting, there are two paintings by Rubens that relate to it. The first is a charming sketch of Two Small Children in Bed in the National Museum of Western Art in Tokyo (fig. 7), and the second is an equally appealing painting of a Child with a Bird in Berlin (fig. 8). We immediately see a connection between the Christ Child in the present painting, who looks upward in admiration of his mother’s face, and the child who is fast asleep on the left of the first sketch. Julius Held strongly argued that the children in the Tokyo sketch were Rubens’ niece and nephew, who were born to his brother Phillip in 1610 and 1611.10 This would identify the child on the left as Clara Rubens, who would have been an infant when the sketch was painted. It is no surprise that Rubens, who had already included many putti in his works and would paint scores more, was interested in studying the beauty of these newborns in his own extended family. Rubens’ brother Phillip died in September 1611, and Peter Paul, together with his father-in-law Jan Brant, became legal guardians of these two children. While the sketch in Tokyo relates to the head of the Christ Child in our picture, the small painting in Berlin depicts a boy in profile who is nearly identical to the St John the Baptist. One must disregard the bird and the position of the child’s hands in this comparison, because this left section of the painting was added by Rubens around 1624, when he apparently reworked and enhanced an earlier painting of circa 1614. We can imagine that this is the three-year-old Phillip Rubens, whom his uncle continued to love and absorb for inspiration in his paintings.11

11. See Held, op cit., p. 606 and J.B. Bedaux and R. Ekkart, eds., Pride and Joy. Children’s Portraits in the Netherlands 1500-1700, exhibition catalogue, New York 2000, pp. 123-124, cat. no. 16. Bedaux and Ekkart point out the the X-ray image of the painting reveals that the child initially had wings, and the painting was used as the model for the angel in the upper right corner of Rubens’ Madonna in a Garland of Flowers in Munich. It appears that the Child with a Bird in Berlin has never before been linked to Rubens’ The Virgin and Christ Child, with St. Elizabeth and St. John the Baptist