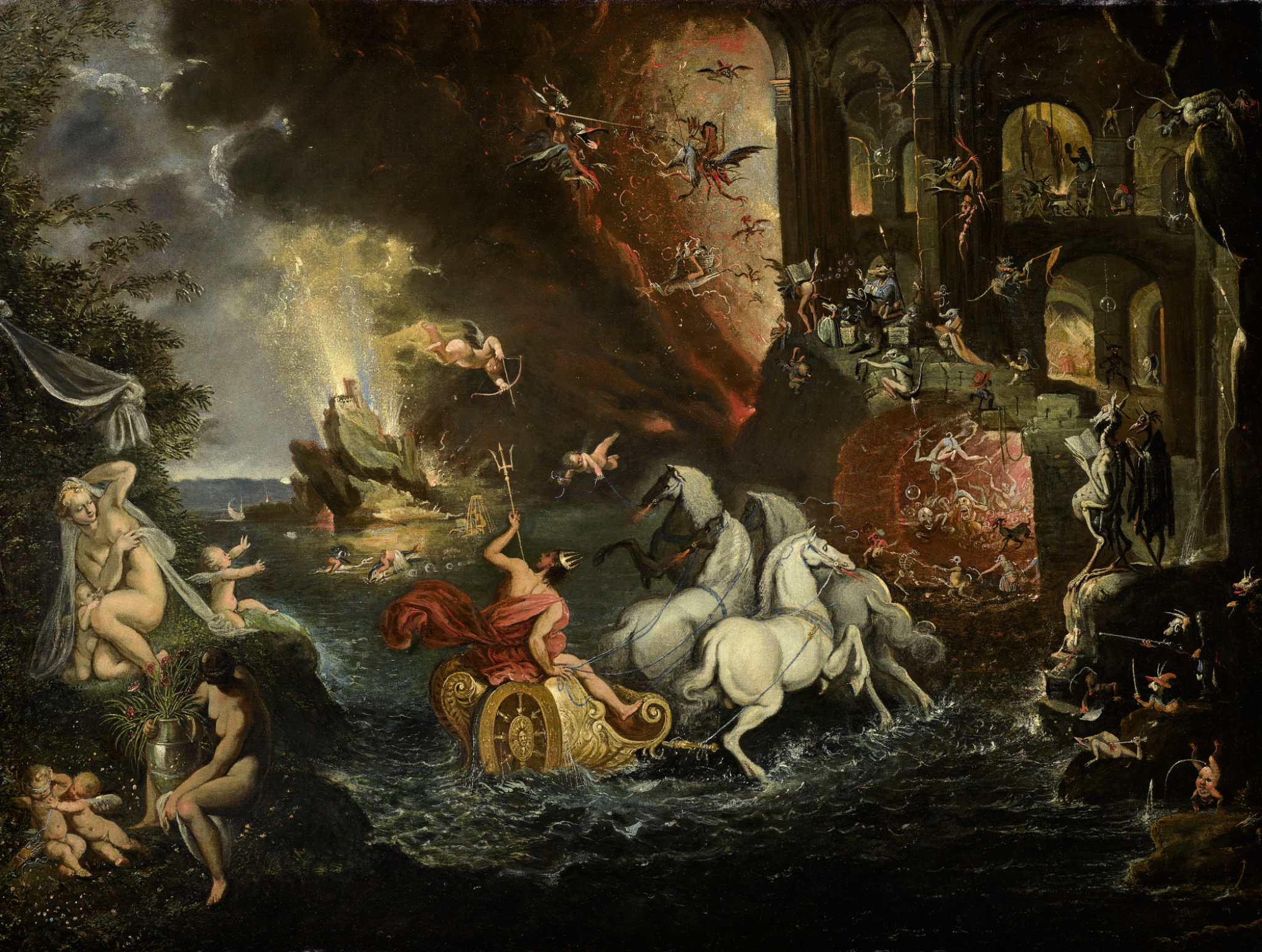 This work has a very old glue lining. The paint layer has been more recently cleaned and retouched. It is stable. It can be seen that there is fairly broad retouching in some of the architecture in the upper right quadrant. There are spots of retouching in the lighter colors surrounding the creatures under the archway in the upper center, and in other lighter areas of the sky. There are retouches addressing abrasion and weakness in the figures and animals. There are other retouches throughout that are not identifiable under ultraviolet light. Although the condition is compromised, the work looks well and should be hung as is.

Also known as a stregozzo, this extravagant and nocturnal scene of Pluto and Proserpina animated with countless comical and diabolical figures that steal attention away from the protagonists is emblematic of the versatile output that brought great success Joseph Heintz the Younger. Born in Augsburg around 1600, he was the son and pupil of the Prague painter Joseph Heintz the Elder; his long career that spanned nearly five decades was spent in Venice. Here, he distinguished himself from his contemporaries with his revolutionary paintings like the present, inspired by the printed and painted output of Hieronymous Bosch, Pieter Brueghel the Elder, and Jacques Callot. For example, a detail from the latter’s Temptation of Saint Anthony is found repeated in the two monsters standing atop a rock near the right edge of the present composition as they overlook the extravagant scene that unfolds before them (fig. 1).

In this large canvas, Heintz illustrates the moment from the story of Pluto and Proserpine as recorded in Ovid’s Metamorphoses (Book V). Pluto sits here on his golden chariot at the entrance to his kingdom of the underworld about to be struck by cupid’s arrow. Once struck, he will fall in love with Proserpina, who cowers away from him in the lush grove at left with her escort, the nymph Cyane, nearby. The charm and beauty of the details surrounding Proserpine, including the playful putti in the lower left corner, serve to further contrast the amusing and bizarre figures that populate the right half of the composition.

It is of not much surprise that in the past this painting has been ascribed to other artists who explored similarly fantastical scenes, such as Jan Mandijn and Jacob van Swanenburgh. Its rightful reattribution to Heintz arose not only from a recognition of his distinct style and technique, but also in knowing that he explored this specific subject on at least three other occasions, one version of which is mentioned in the inventory of Francesco Querini a San Marziale’s collection dated 22 March 1708.1 In addition to a similar painting in a private collection,2 stylistically and visually the present work comes very close to another version by Heintz, today in the Municipal Museum Mariánské Lázně in the Czech Republic (fig. 2).