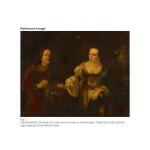 This work has not been recently restored. The paint layer is quite dirty, with airborne dirt and yellowed varnish. There seems to be no abrasion to the features of the face, and the chest and dress are similarly well preserved. There are some cracks in the forehead and in the cheeks that could be retouched. Above and to the right of the head, there is a pattern of cracking that may indicate a non-original varnish or possibly retouches that are currently not visible under ultraviolet light. While the left side of the background seems to be in good condition, the top and right side may require retouching if the work is cleaned.

Possibly the Dukes of Leuchtenberg;

Ferdinand Bol, one of Rembrandt’s most talented students, specialized in elegant portraits like the present, which dates stylistically to the first half of the 1650s. This woman with softly modeled features is shown half-length and looking to the left out of the picture plane. Her societal status is confirmed by her richly adorned costume and the pearls she wears on her ears and neck. Although this may be a fragment, even on this small scale, Ferdinand Bol’s distinct style is clearly recognizable.

The same sitter, in a comparable pose and costume, recurs in a double portrait of An Elegantly Dressed Couple in a Landscape (fig. 1), also dated by Blankert and Sumowski to the early 1650s, presently on loan to the Dordrechts Museum from the Rijksdienst voor het Cultureel Erfgoed (RCE).1 Around the time that this painting last appeared at auction, side by side comparison between the two revealed the superior quality of the present painting. Thus, it is probable that the present portrait is a fragment of a larger, now lost, double portrait, whose composition is recorded by the replica at the RCE.

The large double portrait shows a woman holding a bunch of grapes, traditional symbols of fertility, suggesting that it is a marriage portrait. Jan Bialostocki recognized the figures in the RCE portrait as Hendrick Trip (1607-1666) and his first wife, Ceclia Godin (1607-1637).2 If Bialostocki is correct in identifying the male sitter as Trip, the dating suggests his companion is his second wife, Johanna de Geer (1629-1691), whom he married in 1646, shown here in her early 20s. Further support of this possible identification arises when comparing the present work with Bol's 1661 portrait of Johanna de Geer with her daughter Caecilia; both female sitters share similar high cheekbones, high hairlines, small chins, and eyebrows.