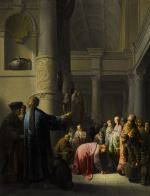 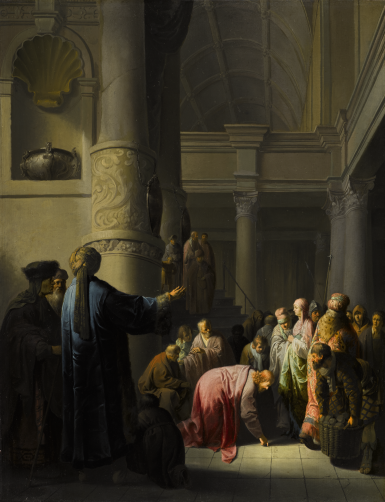 WILLEM DE POORTER | CHRIST AND THE WOMAN TAKEN IN ADULTERY

WILLEM DE POORTER | CHRIST AND THE WOMAN TAKEN IN ADULTERY

CHRIST AND THE WOMAN TAKEN IN ADULTERY

This work is in extremely good condition. It is painted on an oak panel which seems to be made from a single piece of wood. The panel is flat and the paint layer is stable. There are no retouches in the figures. There are about eight small isolated spots of retouching in the church interior behind, and one area of restoration in the lower left corner. The work can be hung in its current condition.

Long considered the work of Gerrit Dou and appearing as such in the 1811 sale (see Provenance), this finely painted scene was only confirmed as by Willem de Poorter by Dr. Werner Sumowski in 2013.2 Sumowski described it as ‘ein qualitätvolles Werk des Meisters’ and it should be considered one of the finest of De Poorter’s mature works, dating to the 1640s, and much inspired by the work of his contemporary, Rembrandt.

De Poorter’s relationship with Rembrandt has been much debated. It has long been assumed that De Poorter trained in Rembrandt’s studio in Leiden between the years of 1629 - 1631, along with Gerrit Dou. Recent scholarship has however advanced the theory that this may in fact be unlikely, and that De Poorter trained in his home town of Haarlem, and only came into direct contact with Rembrandt when the latter moved his studio to nearby Amsterdam in the mid 1630s.3 De Poorter’s earliest works appear as much influenced by artists in Haarlem such as the German print-maker, draughtsman and painter, Hendrick Goltzius and in particular those of Hendrick Pot.

We can however be sure of the influence of Rembrandt on De Poorter when analyzing this scene depicting Christ writing in the dust of the ground with his finger, as the Pharisees relay their accusations of adultery. The recipient of these accusations is surrounded by a crowd of men; she stands erect and still, swathed in unembellished white and pink linens, with a pale blue sash. The Pharisees are, in contrast, dressed in rich embroidered fabrics with fur collars and cuffs, and with elaborately fashioned turbans. The scene is depicted in a marble interior with flagstone floors and double storied vaulted ceilings, against a backdrop of high columns with composite capitals. The interior appears dark, save for the light source at the left of the composition that illuminates the figure of Christ, the accused woman, and the figures nearest them. The light at the left also allows the impressive turbaned figure in blue (who acts as a repoussé) to appear as a silhouette, but with some of the wonderful elements of his attire picked out in precise detail.

It is in this extraordinary mastery of chiaroscuro that De Poorter's proximity to Rembrandt is made evident, whether from his direct tutelage or simply through visits to Leiden or to Rembrandt’s collectors.4 This scene bears close comparison with Rembrandt’s Simeon’s Song of Praise (datable to 1631; The Hague, Mauritshuis) and Rembrandt’s own treatment of this subject in the National Gallery, London, dated to circa 1644 although more characteristic of his paintings of the 1630s. The similarity between De Poorter’s biblical scenes of the early 1630s and the works of Rembrandt during the same period account for the debate surrounding the attribution of a panel depicting The Tribute Money in the collection of the National Gallery of Canada in Ottowa. The painting was traditionally ascribed to Rembrandt until the authors of the Corpus of Rembrandt Paintings dismissed the attribution in 1982 as by an artist from Rembrandt’s immediate circle; new dendochronological research has led the museum to reopen the question of Rembrandt's authorship. Comparison between Ottowa’s The Tribute Money and this depiction of Christ and the Woman Taken in Adultery now suggests that the former could also be the work of De Poorter.

This unpublished panel is first recorded in Geroge Pitschaft's sale of 1811. Pitschaft was the "Premier Conseiller des Finances, et Directeur des Douanes" to the elector of Mainz, and later went to Paris where he expanded his art collection. Following the sale of his collection in 1811, this painting found its way to England where it appears in the 1848 probate valuation of Anne Elizabeth Murray (née Cholmley Phipps), the only child of Constantine John Phipps, 2nd Baron Mulgrave, P.C. (1744-1792), and the widow of General Sir John Murray, 8th Bt. of Dunerne (1768?-1827). With her husband, Lady Murray formed an excellent collection of Old Masters. She gained a reputation as a competent judge of artistic quality and took a keen interest in the European art market. She spent much time on the continent touring public and private art collections and visiting the studios of artists and sculptors. In 1824 she privately printed an account of her travels in Holland that detailed her study of Dutch Old Master paintings in collections and museums throughout the Netherlands.5