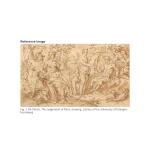 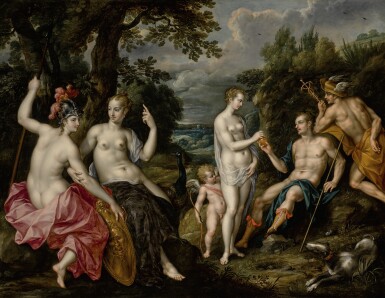 THE JUDGMENT OF PARIS

This painting is in excellent condition overall. The paint layers are exceptionally well preserved, and the small amount of restoration found in the picture is carefully and beautifully executed. Restoration is primarily in the form of narrow threads of retouching along the three horizontal joins; a few tiny strokes are located in the figures and in the sky around the head of the female figure standing closest to Paris. Normal age-related increased transparency in the darkest browns in the foliage above and to the right of Hermes has been lightly reinforced. The varnish is clear and evenly glossy. The wood panel support, comprised of four horizontally grained boards, has been thinned and a cradle attached to the reverse. The panel is planar. This painting may be enjoyed in its current state and the restoration should last for many years to come.

Hendrick de Clerck trained as a history painter with Marten de Vos in Antwerp and served as court painter to Archduke Ernest (1594-5) and later to Archduke Albert of Austria, governor of the Spanish Netherlands. He contributed to the "Joyous Entry" of Albert and his new wife Isabella, daughter of King Philip II of Spain, in 1599, and painted the ceiling of the Oratory of Archduke Albert in the Palace of Coudenberg in Brussels in 1609. De Clerck's style represents the transition from Mannerism to the Baroque and his subjects are imbued with humanist thought.

In Heroides 16, Ovid relates the story of the wedding of Peleus and Thetis, which ended in chaos as Eris, goddess of discord, takes revenge upon the newlyweds for failing to invite her. She throws down a golden apple labeled "for the fairest," which sparks a vanity contest among the goddesses in attendance. Jupiter sends Mercury, seen at far right, to task the shepherd Paris with the decision. He must choose between Venus, goddess of love and beauty, represented here with Cupid; Juno, chief goddess accompanied by her peacock; and Minerva, goddess of wisdom, war, and art, wearing the helmet. To win over Paris, Juno promises land and riches; Minerva, military glory; Venus, the love of the most beautiful woman on earth. Paris is shown here handing the golden apple to Venus, as he could not resist her promise of the love of Helen of Troy, daughter of the King of Sparta and wife of King Menelaus. His decision will cause the Trojan War.

The present painting relates closely to a drawing (fig. 1) held at the Library of the University of Erlangen, Nürnberg. De Clerck painted two other versions of this subject: one at the Universalmuseum Joanneum, Graz1, and one in the Phoebus Foundation, Jersey.2