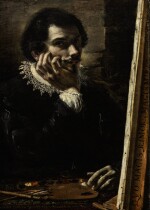 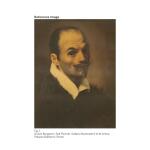 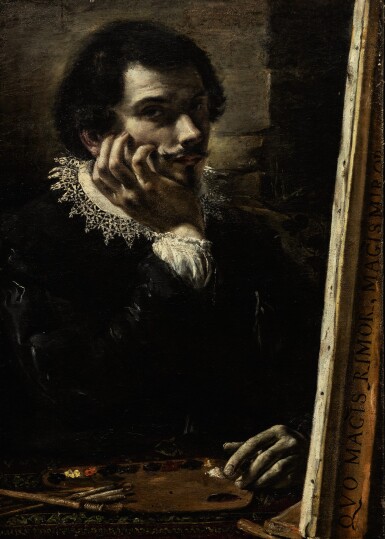 ORAZIO BORGIANNI | SELF PORTRAIT AS A PAINTER WITH PALETTE AND CANVAS

ORAZIO BORGIANNI | SELF PORTRAIT AS A PAINTER WITH PALETTE AND CANVAS

SELF PORTRAIT AS A PAINTER WITH PALETTE AND CANVAS

This work has a very old lining. It is stabilizing the paint layer. While the stretcher mark across the top is slightly raised, the surface is attractive. The paint layer is partially cleaned and has a few retouches that have been added more recently. There are three restored losses on the top edge, one in the upper left running about 2 by 1 inches, one directly about the head measuring about half an inch square, and one in the upper right edge running about 5 inches horizontally by 1 inch vertically. There are a few spots of retouching around the extreme edges. There are otherwise no retouches visible either to the naked eye or under ultraviolet light. The restorations across the top edge could be improved. The calligraphy on the right edge is un-abraded. The palette is in very good state. Slight pentimenti show in the index finger in the lower right. There is slight thinness in the black of the tunic around the ruff and cuff, and in the hand and chin of the figure, which could be retouched. Although the painting could be hung in its current state, it would respond well to careful restoration. The condition of the work is very good overall.

Borgianni painted this confident yet tense self portrait at age 31 or 32, just after the artist returned to his native city of Rome after working in Spain for several years. The Latin motto inscribed on the canvas stretcher signals his intellect and refers to the constant search for knowledge and wonder of discovery ("the more I seek, the more I am amazed"). Herman Voss discovered this painting in the mid-20th century, at which time it had been overpainted and the detailed lace collar had been turned into a flat, square collar, and the background made spare and dark. When Voss saw the portrait again in 1962, the overpainting had been removed so that it appeared in its current state, and Voss immediately recognized it as an important early work by Borgianni, one of the leading Caravaggesque painters of the early 17th century in Rome.

Orazio Borgianni was born on April 16, 1574 in Rome, the son of a carpenter from Florence. He received his artistic training from his stepbrother, Guilio Lasso, a sculptor and architect. Borgianni accompanied Lasso on a trip to Sicily sometime around 1591; his first signed and dated painting from 1593 remains there. He went to Spain in late 1597 and had a productive stay for several years, enjoying royal patronage. In Madrid in 1603 he became a founding member of an Italian-style academy of painting. Scholars have debated whether Borgianni returned to Rome before going back to Spain, but in any case he was in Spain in 1605 and back in Rome before 1606, in which year he wounded a man with a sword and was accused, alongside Carlo Saraceni, of orchestrating an assault on rival artist and writer Giovanni Baglione.1

Borgianni was apparently culturally sophisticated; in addition to his involvement with the painting academy in Madrid, he joined the Accademia di San Luca in Rome in 1606 and held leadership positions. The present self-portrait was likely painted soon after he became a member of this academy, and his pensive expression in this painting and the Latin motto indicate that he wanted to present himself as an erudite artist. In 1608 he joined the Accademia degli Humorisiti, whose members included poets Giovanni Battista Guarini, Gian Battista Marino, and Alessandro Tassoni; Borgianni painted a portrait of Guarini according to Baglione.2 Two years later he was elected to the Accademia dei Virtuosi al Pantheon. Most of Borgianni’s approximately 50 known works date between 1603 - 1616.

This is the first known self-portrait of Borgianni, as well as the most sophisticated. He would later paint two more self-portraits, both of which show his appearance as older, less attractive, and less clearly identifiable as an artist. The Self Portrait in the Palazzo Barberini, Rome, probably dates from circa 1615 and although Borgianni still has the curled mustache and goatee seen here, he has lost much of his hair (fig. 1). The spare monochrome background and nondescript black clothing with flat collar do not reveal his occupation or ambition. The last self-portrait dates from the last year of Borgianni’s life and is posthumously dated 1617, because it served as his commemorative portrait for the Accademia di San Luca. Here he plays the role of a tortured artist, turning his head awkwardly toward the viewer with his beard and hair unkempt.3

We are grateful to Gianni Papi for confirming that this painting will be included in the catalogue of the monographic exhibition on Borgianni to be held at the Palazzo Barberini, Rome, beginning March 2020.