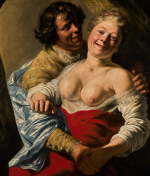 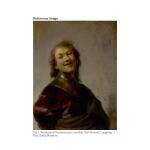 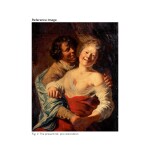 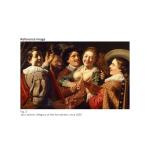 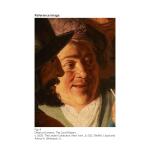 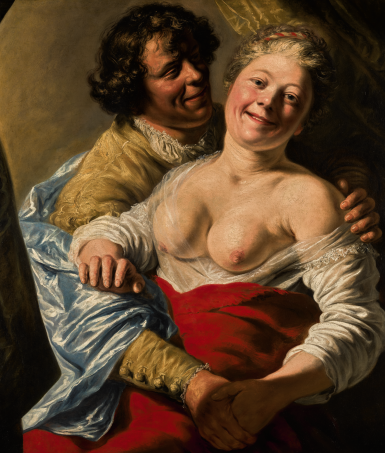 JAN LIEVENS | WOMAN EMBRACED BY A MAN, MODELLED BY THE YOUNG REMBRANDT

JAN LIEVENS | WOMAN EMBRACED BY A MAN, MODELLED BY THE YOUNG REMBRANDT

WOMAN EMBRACED BY A MAN, MODELLED BY THE YOUNG REMBRANDT

The Rivalry of Rembrandt and Jan Lievens

With Galerie Georges Giroux, Brussels, before 1960;

In a moment of total and unbridled pleasure, an amorous couple embraces as an ebullient young gentleman smiles longingly at his partner, and she in turn smiles directly at the viewer. Jan Lievens painted this early masterpiece in circa 1626-1627, when he was only around twenty years old, but already a fully-fledged and commercially successful artist in Leiden, where he worked alongside his friend and budding rival Rembrandt. While Rembrandt excelled in depicting his subjects’ psychology, Lievens painted large, bold canvases with life-size figures that demonstrate the freedom and confidence of his style. The two artists both studied with Pieter Lastman in Amsterdam, depicted similar themes in their early works in Leiden, and even appear in one another’s paintings—in fact the model for the young man Lievens portrayed in this carefree attitude was almost certainly Rembrandt (compare fig. 1).

Thematically and compositionally, Woman embraced by a man is related to sexually-charged genre scenes that the Utrecht Caravaggisti made popular in the early 1620s. Gerrit van Honthorst and Hendrick ter Brugghen, in particular, painted tightly cropped compositions of embracing couples. Lievens’ approach, while similar, is refreshingly direct and uninhibited. There is no ambiguity here, with the young woman's breasts shown bare by design rather than chance. Both figures are full of life and healthy, with flushed cheeks and youthful features. They are ideally matched, and their locked hands emphasize the plain fact that despite the woman’s outward gaze, they are lovers, and the viewer is merely a voyeur to their moment of passion.

When this picture was first discovered in 1998, its appearance had changed considerably since Lievens had conceived it (fig. 2). The painting had been enlarged at the top and right side, and the young woman’s fully exposed breasts had been covered with a veil. When the painting was restored before the 2008 Lievens exhibition, this overpainted veil was removed. During this restoration, it was also discovered that the canvas had been trimmed at the left and, to a lesser extent, at the right. Before the canvas was trimmed, more of the drapery along the left edge would have been visible, creating a framing device for the figures. Lievens may have intended the canvas to be seen from below, based on the position of the woman’s hand and her gaze.1

Lievens was an innovative and bold artist, particularly in the early-to-mid 1620s when he was at the outset of his career in Leiden. The evolution of his style and painting techniques during this period is evident when one compares this work with a similarly themed painting, Allegory of the five senses (fig. 3), that he executed a few years earlier.2 Woman embraced by a man is executed with a painterly freedom unlike the more crisply rendered costume and skin of the earlier Allegory. The over-life-size scale of the present figures is consistent with Lievens’ bold and “audacious” paintings from works from the mid-to-late 1620s, which Constantijn Huygens, Secretary to Prince Frederik Hendrik, so admired in his 1630 autobiography when he compared Lievens and Rembrandt as artists. While Huygens noted that Rembrandt’s pictures revealed his subject’s psychology, he wrote that:

“Lievens is the greater in inventiveness and audacious themes and forms. Everything his young spirit endeavors to capture must be magnificent and lofty. Rather than depicting his subject in its true size, he chooses a larger scale. … Seeing the maker beside his paintings, it is scarcely credible that such a meager sapling can put forth so much fruit.”3

The first signed painting of this scale by Rembrandt is the Portrait of a Scholar dated 1631 and in the Hermitage.4 While Rembrandt and Lievens had somewhat different styles of painting in the mid-1620, they shared many ideas and likely were friends in the small Leiden artistic community. Whether or not they shared a studio is uncertain, but they shared models and even depicted each other in their compositions. Arthur Wheelock, who has argued that Rembrandt posed for the young man in the present painting, notes that the same figure appears, in what is likely the earliest known depiction of Rembrandt, as a smoking cardplayer in Lievens’ The Cardplayers datable to 1622-3 in the Leiden Collection, New York (fig. 4). The same young man in profile, with curly hair, distinctive chin, and bulbous nose, was the model for Lievens’ similarly large-scale Lute player in the Walters Art Museum, Baltimore.5 Lievens served as a model in some of Rembrandt’s early paintings, including the young man in the background of Rembrandt’s Allegory of Hearing, circa 1623 (the Leiden Collection), and the young man in the background of the Music lesson, 1626, in the Rijksmuseum, Amsterdam.6

We are grateful to Arthur Wheelock for assistance with the cataloging of this lot.