D azzling abstract faces covered with shining brass and copper plates seem to float in space; geometric abstraction of remarkable ingenuity and variety present expressions of sublime, ferocious, startled or subdued emotion; rigorously organized designs, always symmetrical, present the human form reduced to its most basic visual elements. These extraordinary sculptures once rose above the sacred ancestral reliquaries of the peoples generally referred to today as the Kota, in the regions straddling the borders of modern-day eastern Gabon and western Republic of the Congo. Over the course of several decades, Edwin and Cherie Silver devoted themselves to gathering an exceptional assemblage of sculptures representing the quality, variety and aesthetic strengths of Kota traditions. They famously displayed this group, the heart of their collection, atop a Steinway grand piano in their Los Angeles modernist home, beneath another artwork comprised of geometric metal panels: an iconic mobile by the twentieth-century abstract American sculptor Alexander Calder.

Reliquary sculpture of central Africa has been rightfully “considered to occupy the very summit of African creativity.”1 Kota reliquary figures, in particular, have become icons of world art, and are today instantly familiar to Western viewers. The basic elements of this tradition are distinctive and do not exist elsewhere in Africa; carved in wood, the human head is rendered with graphic geometrical shapes in a flattened, mostly two-dimensional shape, rising vertically on an integrally carved cylindrical neck above an open lozenge. The front of the sculpture (and sometimes also the back) is covered with an arrangement of flattened metal attachments, often in varying colours and with chased geometric motifs. No two figures are entirely identical, but the tradition conforms to certain basic canons, which in the minds and hands of Kota artists, were subject to an astonishing diversity of formal improvisation, reduction, embellishment and invention. Represented in the Silver collection are the very distinctive skeletal style of the Sébé River, in its highest expression in the hand of the “Master of Sébé” (lot 51); the inventive Obamba styles, thought of as the most “classic” types, situated in Southern Gabon (lots 13, 14, 22, 50, 51 and 52); and the richly decorated variants of the Ndassa group of the northeastern edge of present day Gabon and the Northwestern Republic of the Congo (lots 23 and 24).

Kota reliquary sculptures were among the first sub-Saharan African artworks to be displayed in the West. The narrative of their “discovery” broadly followed the well-told story of that of African art generally: first seen as ethnographic specimens, then discovered by artists excited by the aesthetic solutions they revealed; and finally esteemed in their own right within the canons of world art.

As William Rubin proved, Kota reliquary figures bear not only an affinity to works of modernist abstraction, but played a key role in their propulsion. Examples of Kota sculpture were visible at the Musée d'ethnographie du Trocadéro at the time of Pablo Picasso’s famous visit there in 1907 and, according to Rubin, contributed to the stunning breakthrough seen in Les Demoiselles d'Avignon of that year. “Taken together, the Kota and Hongwe reliquary figures – certainly the most abstract of the tribal sculptures Picasso encountered – constitute, along with Baga figures, and Fang masks, and reliquary heads, the most important African prototypes for his art from June 1907 until the summer of the following year.”2 “More important, however, than any visible borrowings was Picasso’s sense of tribal objects as charged with intense emotion, with a magical force capable of deeply affecting us. This went hand in hand with his understanding of the reductive conceptual principles that underlie African representation. On this level, Picasso’s debt to African art was not superficial but profound.”3

The iconographic designs of Kota figures reference the faces, and in some cases the skulls, of those whose sacra they watched over. The surfaces of copper and brass – as highly valued as gold in nineteenth century Gabon – were kept gleaming by repeated sand polishing, and evoked the sparkling surface of a body of water, beyond or beneath which was the world of the deceased. For their creators, these sculptures embodied a mystical conduit between the living and the dead. The highest examples of this artistic practice reveal to us artists whose formal ingenuity, use of materials and artistic skill resulted in a condensation of spiritual force in league with the great sacred sculptures of the world. 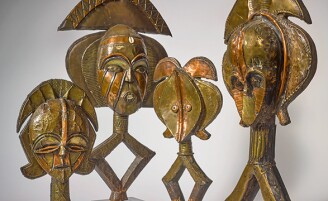