Rediscovering the Glamour of Period Jewellery

S otheby's Fine Jewels sale showcases stylish signed pieces from famed houses such as Graff, Van Cleef Arpels, Cartier and Mauboussin, as well as one-of-a-kind jewellery that tell the story of design through the twentieth century. The selection showcases designs from early in the century, to the seminal period of the 1920s and 1930s, as well as more contemporary pieces, bringing jewellery design up to the present day. 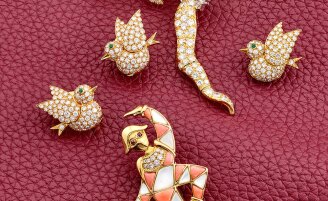 Within this selection of fine jewels are period pieces that would appeal to collectors who seek something unique and timeless. In a November 2019 interview, David Bennett, Worldwide Chairman of Sotheby's Jewellery, explained the growing appreciation for period jewellery.

“The idea of having a piece no one else possesses has become core motivation for antique jewellery collectors."

Many of the earlier periods are rich in possibility. For those who appreciate antique and vintage styles, old mine cut diamonds have a soft, romantic appearance. It is one of the oldest recognized antique cut, but still appeals to the modern collector and remains in demand today. Many of the antique cut diamonds had larger faceting and were originally meant to be seen in the glow of candlelight, thus they exude a subtle radiance and character. Of particular note in the current sale is a ring set with an old-mine-cut diamond weighing 1.00 to 1.20 carats, decorated with single-cut diamonds. Seen with modern eyes, the ring has a particularly elegant and soulful character that is sure to appeal to those who appreciate period jewellery.

By contrast, the Art Deco period often conjures images of tassel-trimmed flapper dresses and hedonistic Great Gatsby-esque parties. It should in fact be considered an all-encompassing design movement, rather than a specific time period, which challenged traditional Victorian and Edwardian stereotypes in favour of something that refused to look back, only forward. Known for emblematic designs, avant-garde materials and glamorous commissions, the 1920s and 1930s continue their prominence in the world of auctions.

Under-pinning the design style across all these disciplines was a keen sense of modernity; the world was changing fast, and the proponents of Art Deco wanted to celebrate everything new, futuristic and global. The style of the late 1920s and 1930s was to luxurious, glamorous and optimistic about a future filled with innovations in transport, machination and feats of human engineering.

Encapsulating this spirit is a the Mauboussin diamond wristwatch, the dial set with baguette and single-cut diamonds and the strap decorated with baguette, brilliant- and single-cut diamonds. During the 1920s, the French house Mauboussin took the spotlight for its striking designs, marking an energetic style suited to the fast-moving, and fast-talking modern woman. In the current sale, this stunning showpiece from 1929 exemplifies quintessential Parisian Art Deco, and accompanied by Mauboussin digital certificate of authenticity.