O pen for bidding on 9 April, Sotheby’s upcoming sale, Picasso’s Menagerie: A Collector’s Legacy, is crawling with curious creatures, both realistic and mythical.

Imagined and created in collaboration with the Madoura pottery in sunny Vallauris, the Master’s ceramic oeuvre boasts a diverse range of flora and fauna including cooing doves, sprightly goats, and mighty bulls. Had he been born in another age, the artist’s whimsical earthenware specimens would befit the Royal Menagerie at Versailles.

Of the zoomorphic designs, Picasso’s mighty Hibou (A. R. 224), rules the roost. The majestic avian vessel is Picasso’s grandest ceramic tribute to his favourite animal: the bird. The artist kept an aviary in his Paris abode and, sometimes to the chagrin of his partners, took pleasure in rescuing injured and orphaned fledglings.

How Ceramics Brought Out Picasso’s Playful Side

One feathered friend, affectionately named Ubu, fortuitously stumbled upon Picasso and photographer Michael Sima – or vice versa – with an injured claw outside the Musée d’Antibes. The artist bandaged his limb and carried him home to the city, where Ubu settled in comfortably with the canaries and pigeons nesting in his kitchen. “He smelled awful,” Picasso’s then-partner Françoise Gilot has lamented, “and ate nothing but mice.”

The owl, which soon became a staple throughout Picasso’s ceramic work, also held significant meaning to his adopted community in Southern France. The revered bird was the ancient emblem of Antibes and its environs, admired for its associations with Athena, the goddess of wisdom. Like the ancient potters of Antipoli, Picasso appreciated animal subjects for their metaphorical potential. Sometimes beautiful and sometimes grotesque, Picasso’s ceramic creatures represent every facet of human nature.

The Master’s ceramic menagerie remains a novelty. His playful twist on ancient and medieval conventions revolutionized a traditional medium and its associated iconography. Breathing new life into an ancient practice, Picasso made it his own. 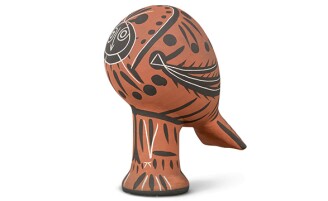