T hough he refused any formal association with Surrealism, Paul Delvaux was deeply inspired by the imaginative works of Giorgio de Chirico, René Magritte, Salvador Dalí and Max Ernst, and created a rich body of work renowned for hallucinatory scenarios and dream-like imagery. In most of Delvaux’s paintings, a sense of the bizarre is heightened by the unexplained presence of stoic figures. “I do not feel the need to give a temporal explanation of what I do,” he said, “neither do I feel the need to account for my human subjects who exist only for the purpose of my paintings.” In L’Impératrice, one such figure stands alone, surrounded by columns, reflecting the artist’s awareness of the ancient connection between these structures and the human form. Much like the haunting street scenes of de Chirico, the rigidity of the architecture creates a palpable sensation of enigmatic uncertainty. 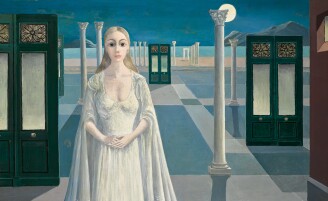 Delvaux was fascinated by light, and many scenes are mysteriously lit by a full moon, bathing the picture in an unsettling incandescence

Originally training as an architect, Delvaux painted eerily empty settings such as railway stations or streets that were integral to his disquieting compositions.

Doors and domestic architecture often feature in Delvaux’s œuvre, and when juxtaposed with his vast landscapes, contribute to a sense of displacement.

More from Sotheby's this Season