My Friends: Claude and François-Xavier Lalanne

O ne of the pre-eminent interior designers of recent years, Jacques Grange has designed residences of clients including Pierre Bergé and Yves Saint Laurent. His intuitive eye for detail has allowed him to curate an unrivalled collection of pieces from key 20th century designers, alongside works by modern and contemporary art titans. A close friend of Claude and François-Xavier Lalanne for decades, Jacques Grange was one of the artist couple's earliest supporters and champions of their formidable creativity.

How did your relationship with the Lalannes begin?

I discovered their work at their first exhibition at Alexandre Iolas' gallery on Boulevard Saint-Germain. I can still see him throwing himself into the Boîte de Sardines! Then he gave me the Le Cocodoll bed, which presided over my first apartment for a long time. Later on, I bought from Karl Lagerfeld, a drawing table that he had ordered from François-Xavier.

Did you connect with them on a personal level too, as well as artistically?

Absolutely. I met them through Alexandre Iolas and we became fast friends. With François-Marie Banier, we would go to see them on weekends at their house in Ury and we took them to the home of Charles and Marie-Laure de Noailles, who were their neighbours in Fontainebleau, with whom they developed an enduring relationship. From François-Xavier, Charles commissioned both the bird that spins in the garden and the desk, L'Ane de Pompadour, for their daughter Nathalie.

You also introduced them to Guy and Marie-Hélène de Rothschild?

Yes, and once again, a relationship was formed. They bought the sheep and the large candelabras. One day, I accompanied Marie-Hélène to the Manufacture de Sèvres. She wanted to give Georges and Claude Pompidou the Canard aux Nénuphars by François-Xavier for Christmas. She placed an order and asked to have it delivered to the Elysée Palace. She returned home and found the same gift waiting for her. The president and his wife had had the exact same idea!

Did you also introduce them to Yves Saint Laurent?

No. When I arrived at Yves' house on Rue de Babylone, the famous bar was already there. He had commissioned it in 1965. There were also the sheep. On the other hand, afterwards, when I redid the library, the dining room and his bedroom, I assisted in the creation of the living room entirely covered in mirrors. It took Claude eight years to create them. There was also the Oiseaux de marbre by François-Xavier on the terrace that I was able to buy later on.

As well as the Bar aux Autruches..!

I dreamt of having it! I had Micheline Maus buy it, as soon as it was created, for her apartment on Avenue Franklin Roosevelt. At the time, I couldn't afford it. There are only six of them: one in Sèvres, one at the Elysée Palace and four in private collections.

How do you feel about the Lalannes finally being considered "real" artists?

Of course! But then, haven't they always been? As early as the1970s, the likes of Gianni Agnelli or Gunther Sachs were already buying their works. Today's collectors, perhaps with a little more distance, are becoming aware of their talent because in the end, the Lalannes were always "true" artists.

One last question, and it's a tricky one! Are you fonder of Claude or François-Xavier?

I am a fan of the couple. With François-Xavier, I love his animals, which are often full of humour. With Claude, I love her poetic, botanical universe. In fact, the only thing I kept after my sale was her Choupatte, which brings me joy every morning. 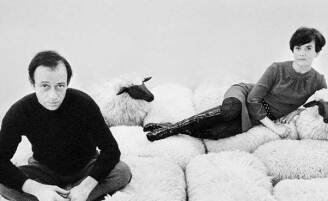