A selling exhibition of artist jewels curated by Louisa Guinness will change your understanding of what art and jewels can be.


L ouisa Guinness is changing the market for artist jewels. Back in 2003, the former stockbroker – and longtime collector – opened her eponymous gallery in London, specializing in artist jewelry. The premier exhibition, entitled ‘Past and Present; Jewelry by 20th Century Artists,’ showcased specially commissioned works by contemporary artists, including Ron Arad, Antony Gormley and Anish Kapoor – alongside modernist creations by Alexander Calder, Georges Braque, Lucio Fontana and other top tier artists. “I wanted to demonstrate the long history and reach of artist jewels,” said Guinness.

In the nearly 20 years since, Guinness’s gallery has commissioned and exclusively distributed 25 additional artist jewelry collaborations with leading contemporary artists such as Mariko Mori and Ed Rushcha. And in 2013, the gallery opened a space in Mayfair, London – making it the first significant exhibition program to be dedicated solely to exhibiting 20th and 21st century artists’ jewels.

Now, the Louisa Guinness Gallery is offering a curated selection of artist jewels for exclusive purchase at Sotheby’s East Hampton Gallery and on Sotheby’s Buy Now. To mark the occasion, we sat down with Guinness to discuss why artist jewelry is such a unique, remarkable collecting category.

After twelve years living in Hong Kong, New York and San Francisco, and focusing on work in Asian markets, looking for a new direction emerged not only as an idea, but as a need – and eventually, I found my answer in London on Sloane Avenue.

My career change began with a successful specialization in artist-made furniture, but by Christmas 2003, I decided to branch out and create the exhibition ’Past and Present; Jewelry by 20th Century Artists.’ This exhibition opened the door to a world of a rather undervalued and unexplored genre that barely had representation in the current market.

It all started with an Alexander Calder necklace that my mother-in-law owned – it sparked my interest. From there, I borrowed as many works as I could, mainly by Picasso, Niki de Saint Phalle and, especially, Calder.

The general reaction from the public was overwhelmingly positive, to the point that I understood this was the direction I needed to take for the gallery.

Why do you suppose the artists are drawn to jewelry design?

From an artist’s perspective, I would be inclined to see artist jewelry as an alternative path for self-expression and also a personal and professional challenge. Unbound by the traditional constraints of jewelry and goldsmithing, the artists can approach jewelry design from a conceptual perspective, make a statement and push the wearer to new territories.

The concept of dimensionality and scale is also very appealing and uniquely difficult. The artist has to decipher how best to translate ideas that would often emerge when working within the monumental into the miniature, ensuring that there is no unnecessary loss of relevant details and maintaining the essence of their practice.

In your opinion, how does ‘art jewelry’ differ from traditional jewelry?

The main thing we need to always consider is that the pieces are to be treated as wearable sculptures: whilst not being worn, they are pieces of art, independent of their function.

The aesthetic of traditional jewelry as an accessory designed to enhance the wearer’s beauty is not a primary motivator, not the main goal of artist jewelry. The artist can create something that can break all the perceived barriers of what jewelry should look and feel like. The objects become an extension of their œuvre, sometimes linked to the practice they are most celebrated for, and sometimes examples of powerful and conceptual new themes and meaning.

How has the market for artist jewels evolved over the course of your career?

When I started this venture almost 20 years ago, I began to seek out any artist-made jewelry that I could get my hands on. I was able to acquire a few very important and outstanding pieces before the market started to recognize the value of the practice and before many remarkable contemporary artists began to dedicate part of their production to exploring artist jewelry.

Even though there are still many aspects of artist jewelry to be discovered and many more to talk about, the market has increasingly recognized the value of these pieces and the importance of the genre itself, especially in regards to the work of Modern Masters from the 20th Century, whose work in this field is often lesser-known to the general public.

“The artist can create something that can break all the perceived barriers of what jewelry should look and feel like.”

These days, buyers have a greater appreciation of art, making them empowered to make well-informed acquisitions that reflect their personal taste. However, this recognition sometimes makes it difficult for collectors to acquire pieces because there is a limited supply. But this is part of what makes the market so interesting.

Tell us about the artists whose jewels are coming to Sotheby’s East Hampton Gallery.

What is so special about the work at Sotheby’s East Hampton Gallery is the way it spans both past and present practice, demonstrating the historical significance of the genre and current innovation. We sent a carefully chosen selection that includes works by 20th-century masters such as Man Ray, Jesus Rafael Soto, Max Ernst and Lucio Fontana alongside contemporary artist jewelers such as Sophia Vari, Cora Sheibani and Christopher Thompson Royds. All of this, in addition to direct collaborations facilitated by the gallery with leading 21st century artists, makes up an exhibition that introduces the viewer to the value and intimacy of artist jewels.

When it comes to your personal style, is there a particular artist-jeweler who speaks to you?

In my view, Calder is the greatest artist jeweler; he was passionate about his jewelry and made the pieces himself for one reason – because he loved it.

What jewel would you recommend to complement summer looks with this season?

It’s tough to choose a piece; however, Lalanne is an exceptional artist. The uniqueness of the galvanized copper pieces, in addition to the complex hues, make them simultaneously unprecedented yet accessible. There is an intricate delicacy in all her pieces, a quality that compliments the simplicity of her creations and the beauty of her larger works. As an alternative, I would recommend the Mariko Mori lucite ring. A direct homage to her permanent installation on top of the Veu da Noa waterfall in Brazil, it can be worn as a pendant or on a small wrist. For Mariko, the medium is a central aspect of her practice. The lucite is designed to have a very specific thickness – carefully suspending the moment before the lucite becomes translucent, giving off an otherworldly hue. Her practice meditates on the intersection of science, technology and nature – with the symbolism of the circle indicating oneness and connection, a perfect note to bookmark a year where we all have yearned for togetherness. Whether pairing Lalanne dragonfly/pear earrings or Mori’s ring with a summery white caftan, both are thoughtful choices that speak for themselves independently. 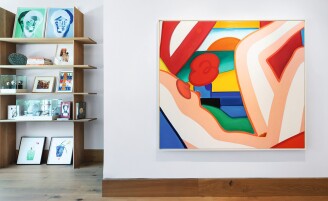