T he Leonardo DiCaprio Foundation (LDF) was founded 20 years ago with the mission of supporting efforts around the world that build climate resiliency, protect vulnerable wildlife from extinction and restore balance to threatened ecosystems and communities. Having given more than $81.1 million since 1998, the foundation will continue supporting its cause with its 20th Anniversary Celebration Auction on 15 September in Sonoma, California. DiCaprio and Laurene Powell will host the event, whose star-studded group of chairs includes Arnold Schwarzenegger, Madonna, Ellen DeGeneres and Robert Redford.

Generously facilitated by Acquavella Galleries, Thiebaud’s work on offer, titled Mountain Split, is a rare, recent landscape, which employs the 97-year-old artist’s trademark vibrancy and thick impasto. Thiebaud is also one of the recipients of the benefit auction’s three new awards. He will be receiving the first LDF Art & Environment Award, in recognition of his attention to the Northern Californian landscape throughout his career. As seen in the luminous Mountain Split, Thiebaud’s steep hills and inclines, characterized by dramatic color and radical views, highlight the sublimity of nature and the ability of art to transform viewers’ understandings of their surroundings. 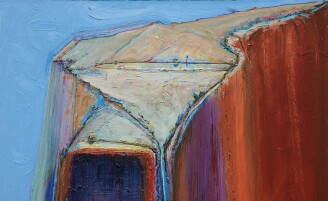 Interview
Wayne Thiebaud on the California Landscape and His Favorite Dessert

LDF is presenting its inaugural annual Lifetime Achievement Award to environmental filmmaker, author and Pace Gallery founder, Arne Glimcher. Glimcher is the Chairman of the Board of Directors for the African Environmental Film Foundation (AEFF), which is located in the Tsavo National Park in Kenya. AEFF produces educational film series about environmental issues in Africa, for the people of Africa, in their own languages. Glimcher also produces and directs major motion picture films, including environmentally themed works such as Gorillas in the Mist and White Gold, a film exposé about the ivory trade and the survival of elephants across Africa. Stay tuned as Sotheby’s covers every aspect of this philanthropic event, from the benefit auction and award recipients to the special performance by Chris Martin of Coldplay.