Arne Glimcher on Africa, Saving the Environment & His Lifetime Achievement Award from the Leonardo DiCaprio Foundation

O n 15 September, Pace Gallery founder and award-winning filmmaker Arne Glimcher will receive the inaugural Lifetime Achievement Award in environmental advocacy from the Leonardo DiCaprio Foundation (LDF), presented during LDF's 20th Anniversary Celebration Auction in Sonoma, California. Glimcher has produced environmentally oriented films, such as Gorillas in the Mist (1988) and the ivory-trade documentary White Gold (2014). He is recognized for his work as chair of the African Environmental Film Foundation (AEFF). Over the past 20 years, AEFF has created dozens of educational films in local African languages and dialects, tackling issues from elephant poaching to the perils of overfishing. Ahead of the event, we talked with Glimcher about his passion for Africa, the power of art, and how every individual can help save the environment.

In 1960 you founded Pace Gallery, which is now one of the world’s most renowned galleries. You’re also an acclaimed filmmaker. How did you become involved with environmental protection and the African Environmental Film Foundation?
It started when I acquired the rights to Dian Fossey’s book Gorillas in the Mist (1983) and decided to produce the film. Sydney Pollock said to me “There is an excellent cinematographer, a Kenyan named Simon Trevor, who did Out of Africa for me, you’ve got to get him.” And so I did. During filming, living in Africa for six months in the jungles, I got to know Simon very well. One day Simon said to me, “I don’t want to make commercial films anymore.” He said he was willing to put everything he had into starting a foundation that would make films about major issues of conservation for Africans in their own languages and dialects. I thought the idea was great. I have always been in love with Africa and interested in conservation. He said “Let’s do it together!” That was 20 years ago. 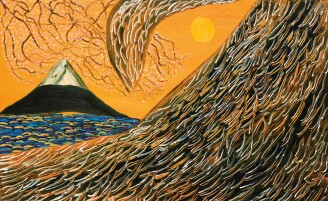 How has AEFF grown over its two decades?
Today we are the second largest distributor of free conservation material in all of Africa, only behind National Geographic. We are the only on-the-ground film foundation in Africa making films in local languages, including remote dialects. We distribute these films by bringing televisions, via jeeps and generators, into schools, government buildings and meeting houses. Hundreds of people come, some walking for eight hours to see these films. They’ve generated a dialogue for change that's been enormous.

From that dialogue have any specific changes emerged that stand out to you?
Yes, I have two. Fishing boats trawl for shrimp off the coast of Kenya, and every day each one of these boats kills nine tons of fish. They only want the shrimp, so they throw the rest back. Besides this, the ships are also destroying the breeding beds of fish. We made a film called Natural Security that showed this entire panorama, from the ocean, to the inland fish markets collapsing – the entire fishing industry going to hell. After the film was screened for the Kenyan government, they put an indefinite stop to trawling closer than 16 miles offshore. The entire seabed has regenerated, and the fishing markets in these villages are back in full swing.

The other change came from the film we made called White Gold (2014) which was the first documentary to expose that the ivory trade in Africa was being run by terrorist organizations – the Taliban, al-Shabab, The Lord’s Army. The night we screened it for the first time in China, it received five million views. Shortly after the screening and the response from the public, the Chinese government announced the end of its ivory trade.

You’re receiving the inaugural LDF lifetime achievement award. What does this mean to you and to AEFF?
This award isn’t about me. It’s about bringing attention to Africa. LDF awarded us a grant for a film project that we have just begun – a history of Central Africa from the 11th-century – the involvement of the slave trade, its relation to the ivory trade and colonization. The Leonardo DiCaprio Foundation has given away almost $85 million. We need them. By supporting the Leonardo DiCaprio Foundation, you’re supporting the African Environmental Film Foundation, and therefore the end of the ivory trade. By supporting this auction, Sotheby’s, galleries and artists who donate are providing a wonderful platform to change the world.

How can everyday people work to protect the environment?
In the face of all of these issues that can feel so overwhelming, you can make a difference. There are laws being repealed that are letting us breathe, protecting endangered species, keeping drinking water safe and the planet healthy. Write your congressmen, senators and legislature. People need to be active. Individuals can create change. A lady by the name of Dian Fossey came from California and wanted to save the mountain gorillas, and she did it. Jane Goodall wanted to understand the chimpanzees, and she wound up saving their species. We don’t all have to go to Africa, but we do need to support these causes.