Kippenberger & Oehlen's Window on the World

A lbert Oehlen and Martin Kippenberger were much more than just student peers at Hamburg’s University of Fine Arts in the 1970s. They were also friends, drinking partners, and band-mates in a jazz group called The Alma Band.

The pair took regular trips together too, none of them very relaxing. On a visit to Brazil in 1985, Oehlen ended up lasting just 10 days of a proposed three months, later explaining that the extreme heat and drug-taking had proved too much for him. (An unperturbed Kippenberger stayed on).

All of which is to provide some background to their rise as enfants terribles of German art – and the successful careers that followed. Coming of age in the era of Punk, they found little, if anything, sacred.

Oehlen received a court summons for the first painting he ever exhibited, on grounds it was pornographic. Over subsequent years, he developed a practice of painting dramatic, anarchic canvases at great speed, often with minimal forethought.

"I'm not a big art-theory person," he says. "When I get asked questions that demand serious statements, I just make it up".

Smears and splashes appear indiscriminately in his work alongside swooshes and spots. Since 1988, Oehlen has embraced abstraction – though unexpected figurative elements, such as skeletons, trees and even Adolf Hitler, can often be found lurking. Kippenberger (1953-1997) looked beyond oils on canvas, his prolific career also including sculpture, photography, installation, performance and all manner of elaborate conceptual projects.

He opened his own museum in an abandoned meat factory on the remote, Greek island of Syros. On the aforementioned trip to Brazil, he bought a petrol station in the city of Salvador and named it after Martin Bormann, the former head of the Nazi Party Chancellery. (According to rumour, Bormann had fled Berlin in 1945 and, in his old age, was running a petrol station in South America).

Oehlen and Kippenberger belonged to a second wave of German artists who emerged after the Second World War. The first wave had included Gerhard Richter and Georg Baselitz (in the mid-1960s). Broadly speaking, Germany’s post-War art was marked by a seriousness and gravitas that reflected everything the country had just been through – and continued to go through, as it lay divided in two blocs (East and West). The work of Baselitz, Anselm Kiefer and Jorg Immendorff springs to mind.

The works of Oehlen and Kippenberger, however, couldn’t be more different, oozing as they do with puckishness and humour. These qualities are very much in evidence in the works offered in I Have to Stay at Home, which is open for bidding between 22 May – 28 May.

As well as the work from which the sale takes its name, Copa und Ipa, also offered is a work that brings together the two artists inimitable styles on one canvas. Gemeinschaftsarbeit is an example of their enthusiasm to collaborate, as they did on several occasions. Sotheby’s has seen a number of Oehlen works performing strongly at auction in recent years; Die Badenden, which sold for £2.3 million in the March 2019 Contemporary Art Evening Auction, is an ode to Jackson Pollock’s forgotten mentor, John Graham, whose likeness is abstracted beyond the point of recognition, apart from the elongated curve of his moustache.

Some have interpreted Oehlen and Kippenberger’s alternative outlook in terms of their nationality – which is to say, as an ironic response to Germany’s trauma. Yet, it’s possible to see things through an art-historical prism too.

"I'm not a big art-theory person... When I get asked questions that demand serious statements, I just make it up"

In Oehlen’s case, he emerged at a time when it was widely argued that painting was dreadfully old-fashioned, if not (in Donald Judd’s phrase) “finished”. The German carried on painting regardless, though, in his own irreverent way. He has said that, as an artist, he has “no magic, no science, no excuses” – and whether others like his imagery is an irrelevance.

As for Kippenberger, his work was arguably less important than his attitude. Seeing movement after movement appear and then disappear (from Conceptual art and Minimalism to Pop and Neo-Expressionism), he seems to have decided that what mattered most was the artist not the art. “I’m a travelling salesman”, he once claimed. Which was another way of saying that what he made an exhibition of was himself.

Oehlen and Kippenberger, then, represent mavericks who refused to follow fashion and stood out from what others saw as the inexorable progress of art history. That they made us all laugh in the process is almost secondary. 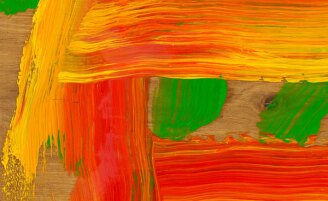 Past Auction
I Have to Stay at Home
22–28 May 2020 | 2:00 PM BST | London
Contemporary Art
Stay informed with Sotheby’s top stories, videos & news.
Receive the best from Sotheby’s delivered to your inbox.