Ilya and Emilia Kabakov on the Future of Russian Art

W ith Sotheby's first-ever auction dedicated solely to the Art of the Soviet Union (London, 28 November) timed to mark the centenary of the Russian Revolution, it is a good time to reflect on the fate of Russia's contemporary artists whose careers unfolded against the backdrop of perestroika and its huge social and political changes. Ilya Kabakov is one such artist who left Russia in 1987 to eventually settle in the USA and, in what is a unique artistic partnership together with his wife Emilia, has enjoyed an extremely successful career in emigration, something which few artists ever achieve.  I caught up with Emilia Kabakov at Tate Modern in London ahead of their retrospective Not Everyone Will be Taken Into the Future to find out more about it and her views on the market for contemporary Russian art.

Jo Vickery: The title of the show is intriguing. Can you say more about it?

Emilia Kabakov: The biggest fear of any artist is that he will be left behind by history.  In 1982 Ilya wrote an article for the Russian art periodical A-Ja about this subject, and the main questions were: Who decides whom to take into the future?  Who will be taken into the future? Who will be left behind? Then, in 2001, we did an installation with the same title for the Venice Biennale. We built a train station where the electronic sign informs the viewer that 'not everybody will be taken into the future'.  The train has already left the station and paintings of the unlucky artist who wasn't taken into the future are scattered on the platform... Right now we are standing almost at the end of our life and the question is relevant even more than before. Therefore it is the title for this retrospective and in a way it is the first real retrospective we have done.

ILYA KABAKOV, THE MAN WHO FLEW INTO SPACE FROM HIS APARTMENT, 1985 © ILYA & EMILIA KABAKOV

JV: This is the first major retrospective not only in the UK but worldwide and yet Ilya Kabakov is one of the great pioneers of installation art whose influence can be seen today in the work of many contemporary artists such as Damian Hirst and Mike Nelson.  Why do you think it has taken so long to get this kind of international recognition?

EK: From the very beginning we decided that we work for museums, with museums and in museums.  It was interesting and fulfilling and gave us complete acceptance by serious art historians and art critics. At the same time we became almost invisible to collectors because installation art cannot be bought by private collectors or at least not on the scale we were working.  As one Californian collector put it: I would buy your work, but I am afraid it will survive only until my next wife.  So, here we are with an enormous number of museum shows all around the world and small number of collectors.

EK: We think that Russian avant-garde put Russian visual art on the map of the international art world.  There is no question that it was and is acknowledged all around the world, including post-Soviet Russia.

JV: How would you characterise your and Ilya's artistic collaboration and how did it come about?

EK: When I try to answer this question many people come immediately to the wrong conclusion that I manage exhibitions and our life. To put my name on the works, including paintings, was Ilya's decision. I was trained as a pianist and for me education is important. I got professional education in music, Ilya got it in painting. But in the contemporary world how many famous artists can you name who did their training as visual artists? Actually, very few.  We have performers, musicians, electricians, even dentists.  Strangely enough, when it comes to us, people immediately put labels and prefer to stick with that.  Ilya says we are working as one person, and so let's just stay with this.

JV: Emigration is a unique challenge for artists who draw on material from within their experiences.  What effect did this have on Ilya's work?

EK: The development of an artist's identity depends on his surroundings and the culture he was raised in which stays with him for the rest of his life. Immigration is difficult for everybody, but it is more problematic for writers and journalists than it is for visual artists. Ilya already was very adept in understanding and using the international language of art without which his work wouldn't be understood or accepted by an international audience. He had to find a way to present his paintings in the context in which they were created, and that’s how and why the total installation was born. It gave him the possibility to create a very specific atmosphere for the works already in existence, as well as for new works.

ILYA KABAKOV AND EMILIA KABAKOV, THE SIX PAINTINGS ABOUT THE TEMPORARY LOSS OF EYESIGHT (THEY ARE PAINTING THE BOAT), 2015. © ILYA & EMILIA KABAKOV PHOTOGRAPH COURTESY THE ARTISTS AND PACE GALLERY

JV:  It seems to me that the role and identity of the audience and viewer is a key element in your and Ilya's art, can we say who this audience is and what they represent and how has this changed over time?

EK: A very good question.  The audience for us is professional art historians, art critics, and so called common people, the viewers, who come to the museum to be in a different world, in a different space, which radically changes their everyday existence. Their feelings and reactions are taken into consideration when we work on the concept, on the idea of the exhibition, no matter how small or big it will be. This was so from the very beginning and I cannot say it has changed with time.

JV:  In 2008 the Garage in Moscow staged the first ever solo exhibition in Russia.  What feelings did this return to the motherland bring?

EK: This is not exactly correct. The first solo exhibition was at the Hermitage State Museum in St Petersburg in 2004. For Ilya it was a physical and emotional shock and he decided, literally speaking, that he is in a dream and as such doesn't have to react to anything as a reality. By then I had already been in Moscow a few times on short trips, yet even for me it was a different world, where in the beginning I didn't  know how to behave or even how to talk to people. I adjust better then Ilya so in a few days I decided that just being myself will be ok. But it was a completely different river of life we had to step in and that wasn't easy.

JV:  I personally think the 1970s and 1980s were fascinating and fertile decades in terms of contemporary art production and practices in Soviet Russia.  That said, the isolation and repression of artists at the time is a double-edged sword as today their story is only now being told and they are placed almost always in a strict regional context.  Do you nevertheless feel that this specific milieu and the collaborations which were created in those closed social spaces has created something of enduring value or does the art simply tell and retell the story of dissidence?

EK: I don't know how everything produced during this period in movies, literature, and especially in art, will survive the test of time.  And I think, nobody can predict such things.  So far only the conceptual circle is coming up.  Ilya thinks that it will survive and will take its place in international art history.  I am not so sure...  it can, as an art movement of "romantic conceptualism', but only time will tell.

EK: I am the last person you want to ask about art market, especially Russian but some of the problems are so visible that even I can pin point them.  Firstly when Russian collectors got over buying the artists they knew from their school books they started to spend their money on big western names.  You will see that Chinese, Indian, and Latin American collectors are buying their artists. Of course, they do buy other great art, but they support their artists as well.  Russians don't do this.  We can name very few collectors who really support and collect contemporary Russian artists.  That’s why you don't see Russian art represented at major art fairs. Dealers already know that Russian collectors will not buy Russian artists. And western collectors don't know Russian artists, because they are not exhibited anywhere. The second and extremely important factor is that every other national artist is supported by their country except Russians.  We, probably, are the only nationality which are thrown into the ocean of the international art world without any support from our national museums, state art institutions, or government.  And this also will be partially the answer to your question: why it took us so long to get this retrospective in a big museum.

JV:  Your work often deals with the problems of identity.  What is an artist?

EK: An artist is whatever and whoever he decides to show to the public. And the rest you can just guess by yourself.

Ilya and Emilia Kabakov: Not Everyone Will be Taken Into the Future is at Tate Modern until 28 January 2018 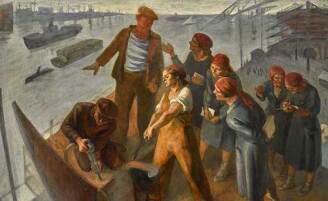