By Sotheby's
Sotheby's is pleased to announce the fifth edition of the NOW! Online sale , which is open for bidding from 18 to 27 February 2019. Read on to discover more about the remarkable works of art on sale and the curator, Esteban Cortázar.

F ollowing in the footsteps of online lifestyle and interior design magazine The Socialite Family in 2017, and publishing house We Do Not Work Alone in 2018, the Colombian fashion designer Esteban Cortázar will curate this year’s edition of the sale.

In a public exhibition taking place on 22-23 and 25-26 February, Cortázar’s favourite works will be presented alongside several of his own creations, illuminating some of the artists and pieces which have inspired his designs.

NOW! will bring together almost 150 pieces of Contemporary art, African art, photographs and design with estimates between €300 and €80,000.

The sale offers aesthetes the opportunity to enrich their collections or decorate their homes with works by both established and cutting-edge contemporary artists.

Among the highlights are artworks by Pierre Soulages, François Morellet and Olivier Debré, as well as photographs by Bert Stern, Robert Mapplethorpe and Peter Lindbergh. As for design, the sale offers works from the 1950s to the contemporary period. Creations by Jean Royère, Maria Pergay, India Madhavi and Hubert Le Gall will accompany superb African art sculptures from Ivory Coast, Ghana and Gabon.

Born in Bogotá in May 1984 to the Colombian painter Valentino Cortázar and the former British jazz lounge singer Dominique Vaughan, Esteban Cortázar has been immersed in the art world from an early age.

He grew up in the bohemian Miami of the 1990s, which saw the growing influence of creators like Gianni Versace and Todd Oldham - two of Cortázar’s inspirations. At 18, he became the youngest designer to show in New York Fashion week. In 2007, he moved to Paris and was appointed director of fashion house Emanuel Ungaro, which he left in 2009 after six collections.

After launching a series of capsule collections for the site Net-a-Porter, the designer revived his eponymous brand, Cortázar, created in 2002, presenting his creations for the first time at Paris Fashion Week in 2015. Today, his designs are stocked in over 30 stores worldwide. 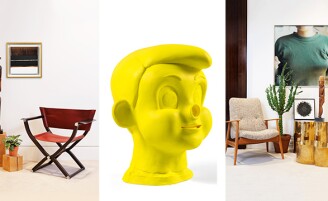