I t was a thrilling night in London as Sotheby's Contemporary Art Evening Auction saw a selection of iconic and powerful works go under the hammer, achieving a sale total of £92,488,659.

Foremost among them was David Hockney's sumptuous portrayal of Californian living, The Splash, which sold for £23,117,000. One of the defining works of the Pop Art movement, the vibrant luxury of its blue skies and carefree poolside ephemerality are today etched in the fabric of contemporary cultural imagination. This was the third highest price achieved for a work by David Hockney at auction, and eight times the price achieved when the work last appeared at auction in 2006. David Hockney’s 30 Sunflowers will also lead Sotheby’s Hong Kong Contemporary Art Evening Auction in April.

The Arrival by Adrian Ghenie, at once scintillating and chilling, was driven to £4,184,500 by four eager bidders at its auction debut. Its central figure is based around Josef Mengele, one of Nazi Germany's most notorious figures, used by the artist as an emblem of evil incarnate. Ghenie's work reimagines Mengele's infamous escape to South America after World War II.

Francis Bacon's Turning Figure marked the beginning of a new phase in the artist's career, one defined as much by tragedy as by personal success, and in which he created what are widely considered to be his best works. It was during this period that Bacon saw his first major institutional retrospective at the Tate, which tragically coincided with the death of his great love and muse Peter Lacy on the opening night. Turning Figure sold for £7,032,000 after remaining in the same collection for 30 years.

Having remained in the same European collection since the 1960s, Wayne Thiebaud's Fruit Stand exceeded expectations to sell for £1,815,000. The work illuminates the artist’s career-long exploration into the transient joys, delights and sentimentality of American life. The auction follows hot on the heels of the artist’s record-breaking sale for Encased Cakes, which brought a total of £6.6m / $8.5m at Sotheby’s New York last November.

Banksy's topical work, created by defacing a 'Vote to Leave' placard from the 2016 Brexit campaign more than doubled its pre-sale estimate to reach £1,155,000 in its auction debut. It was previously displayed in the Royal Academy's Summer Exhibition where its price tag was £350 million, a figure which referenced the Brexit bus advert that claimed leaving the EU would save the NHS £350 million per week.

Yves Klein's Untitled Anthropometry (Ant 132) did not disappoint, selling for £6,177,750. Klein's work stands apart both for its method of production – using a paint-covered human body as an anthropomorphic brush – and the now legendary status of his creative performances, which were accompanied by an orchestra playing the artist's Monotone Symphony: a single note played for 20 minutes.

Tonight's auction was the first time Julie Curtiss’ work has been offered in a London evening sale, and her mysterious and playful Witch achieved £162,500. Works by Curtiss first appeared at auction in May 2019. Her record at auction has since been broken twice.

Maurizio Cattelan’s provocative life-sized sculpture, Untitled, almost doubled its high estimate to sell for £1,515,000, while Günther Uecker's Weisses Feld (White Field) more than doubled its high estimate to also sell for £1,515,000. Jean-Michel Basquiat's fiery work, Rubber, sold for £7,487,600 after remaining in the same collection for 20 years. Basquiat was one of the first artists to bring the style and iconography of graffiti into the arena of the institutional art world.

Three bidders competed for Jean Dubuffet's playful Épisode Champêtre, which reached £1,815,000, while Vieira da Silva’s L’Incendie II ou le Feu – painted while the artist was in exile in Brazil during World War II – achieved £1,635,000. Eddie Martinez's Empirical Mind State smashed its high estimate to sell for £615,000. Finally, in its auction debut, a new record was set for A.R. Penck’s Welt Des Adlers I (World Of The Eagle I) when it sold for £531,000. The work was executed in 1981 at a pivotal moment in Penck’s career following his exodus from East Germany to West in August 1980. 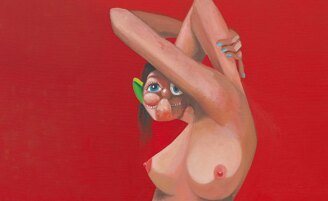