I mportant works by 40 celebrated artists with strong ties to the Hammer Museum at UCLA have been donated for auction this May at Sotheby’s New York. Under the visionary direction of Ann Philbin, the Los Angeles institution has emerged over the past two decades as one of the most vibrant and influential museums in America. This historic sale will support the creation of a new Artist Fund, which will directly support the museum’s pioneering exhibition program and work with emerging artists. The fund is part of the museum’s $180 million capital campaign, which also includes a major transformation of the Hammer’s facility and an expansion of its endowment.

“Artists are the heart of our institution, and I am incredibly grateful to all those who have donated works to support this effort. The Hammer is proud to have shown many of these artists early in their careers, and we are delighted that their generosity will in turn support the work of generations of artists to come. We are extremely pleased to have Sotheby’s as our partner in making the auction possible.”

Ann Philbin, Director of the Hammer Museum at UCLA 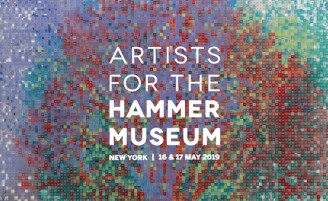 The donated works will be offered across Sotheby's Evening and Day Auctions of Contemporary Art on 16 & 17 May in New York, with public exhibitions in Los Angeles at UTA Artist Space from 17 April to 20 April and in New York at Sotheby’s York Avenue galleries opening 3 May.

A highlight of the group is Mark Bradford’s Scratch Pink from 2018, which is estimated to sell for $2–3 million in the Contemporary Art Evening Auction on 16 May. Renowned for his richly textured canvases built up of layers of collaged paper, Bradford’s expressive abstraction embodies the urban experience as-lived. Invoking visions of cartographic grids or aerial topography, Scratch Pink is an exceptionally vibrant example of the artist’s mixed media paintings, which have most recently been celebrated in his solo shows at Hauser & Wirth in Hong Kong and Los Angeles. Widely regarded as amongst the most influential artists of his generation, Bradford received his first solo museum exhibition in his hometown of Los Angeles , Mark Bradford: Scorched Earth, at the Hammer Museum in 2015.

“The Hammer Museum’s ambitious exhibitions and vital public programming are an indispensable part of the conversations around visual culture, value, power, and place. Its curatorial focus is brave, inclusive, consistently rigorous and eloquently reflects the past, present and futures of cultural forces.”

Barbara Kruger, artist and member of the museum’s Board of Overseers, who has donated to Artists for the Hammer Museum

The Evening Auction will also include a large-scale work on paper from Los Angeles-based artist Mark Grotjahn, Untitled (Poppy Red and Yellowed Orange Butterfly 50.94) from 2018 (estimate $600,000–800,000). Combining rigorous geometric precision with vibrant abstraction, this work hails from Grotjahn’s seminal series of Butterfly drawings, exemplifying the artist’s signature manipulation of perspective to create an exquisite, visually hypnotic composition. An early presentation of the Butterfly works on paper were exhibited at the Hammer Museum in 2005, and examples from the series are today held in the collections of numerous major museums worldwide.

A highlight of the Day Auction, Jonas Wood’s Shio Butterfly Still Life from 2019 exemplifies the artist’s signature use of rich pattern-work to capture familiar scenes of domestic life (estimate $300,000–400,000). Wood is married to ceramicist Shio Kusaka – also featured in the auction for the Hammer – whose exquisite vessels often make appearances in Wood’s paintings and to whom the title most aptly references. Here, the clashing combination of color, form, and pattern is a commanding testament to the timeless visual intrigue of overlapping textures, bold hues, and flattened distortions of space seen in Cubist masterpieces. Wood pays homage to Cubism through his constant negotiation between the representational and the abstract, while creating pictures that are unmistakably fresh and utterly contemporary.

The Hammer Museum publicly announced its capital campaign in February 2018 with a $30 million lead gift from Los Angeles philanthropists Lynda and Stewart Resnick and a $20 million gift from Marcy Carsey, chair of the museum’s Board of Directors. Half of the campaign’s $180 million goal will underwrite a major multiyear transformation of the Hammer’s facility to be completed in 2020, with the remainder of the funds providing ongoing support for the museum’s acclaimed programs, exhibitions, and operations. The campaign has raised more than $140 million to date.