NEW YORK - Have you ever had the desire to become a Chinese female artist?  Now is the time! Sotheby’s S/2 Gallery will be showing two parallel exhibitions that prominently celebrate the women talents at work in Greater China today. Having their works juxtaposed with those of their male counterparts, these women are no longer defined by a gender label, but stand out with their charming innovations.

Assessing the accomplishments of the women artists in imperial China, Marsha Weidner wrote in her article included in the Views from Jade Terrace: Chinese Women Artists 1300-1912 (1988) that, “On the whole, Chinese women painters were sustainers rather than innovators.” Historically women artists were known, though not defined, by their roles as wives and daughters of scholars-officers, which gave them access to the traditions of the masters, or courtesans and lovers, which gave them a relative margin of freedom. But they had at their disposal the full gamut of Chinese art – figures, landscapes, architecture, flowers and plants, and birds and animals. The two Sotheby’s shows illustrate how contemporary Chinese female artists reinterpret and reinvent the traditional ink and ceramic art.

Caroline Cheng’s Hidden Virtues and Frame of Mind consists of two groups of semi-abstract, painstakingly handcrafted porcelain butterflies perching over canvases.  Within each frame, upon closer examination, the arrangement of the butterflies come alive as a Chinese character comes into foucs, both pictorially rich and philosophically profound. The large panels feature words that evoke traditional virtues such as loyal, righteous, honest and filial, while the small panels highlight emotional attributes such as cool, odd, joyous and fucking good. Whereas the former trace their roots to a long history of the Confucius paradigm, the latter resonate with the younger generation’s penchant for a spontaneous state of mind.

Ding Qiao’s Six Lychees, included in the Shuimo show, is a playful retake of the Six Persimmons, a 13th-century painting classic by Zen monk Muqi Fachang during the Song dynasty. Like Muqi’s meditative reductionist simplicity, Six Lychees are floating against an undefined background; but unlike Muqi’s monochromic ink lines and washes, Ding’s work gives the luscious fruits vibrant colors and intricate textures. A similar religious reference also takes the central stage in Yang Yanling’s Visage of Flower – Miss, an O’Keeffe-like close-up of a flower with a penetrating visual effect.  For Yang, a flower is the perfect metaphor for a life that starts with craving and ends with decline: “I want to express my understanding of life through flowers. Sakyamuni was holding a flower once preaching, he didn’t say anything, then among other disciples Kassapa smiled.”

Peng Wei, whose previous works were known for pairing Chinese pictorial motifs with Western literary classics, presents in Blooming an enchanting spring landscape full of sensational blossoms and butterflies. Their color combinations are reminiscent of the mural paintings from the Dunhuang Buddhist caves.

The meditative quality of these artworks is not only religious. Yuan Jai’s Garden of Evergreen draws on the genre convention of auspicious Chinese Lunar New Year paintings, using overlays of colors and ink to simulate the visual effect of paper-cut of peony blossoms, totemic figurines and phoenixes. In the center is a Chinese character (lu) that stands for prosperity and success. A group of deer (lu), which in Mandarin sounds like the word prosperity, populates the lower half of the picture.  Embedded in the character lu is a golden officer’s seal. In traditional Chinese society, success in an official career directly translated into prosperity. While that career path was historically denied to women, contemporary female artists have discovered their own definitions of success. 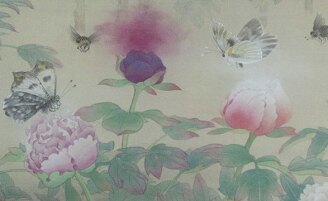 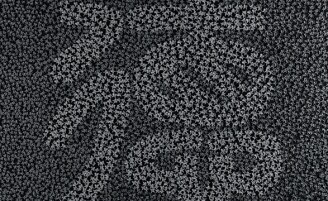