An Intricate Golden Egg Made by a Royal Coachmaker

By Sotheby's
As an example of fine early 21st-century craftsmanship in the tradition of Peter Carl Fabergé or Jean Valentin Morel, few pieces can compare with 'The Royal Egg' in gold, enamel and rose diamonds and its 18-carat-gold ‘surprise' within. It is one of the highlights of GOLD: The Midas Touch, which will take place in London on 29 October.

T his extraordinary piece was conceived by Jim Frecklington, the well-known Australian monarchist and maker of two horse-drawn State Carriages for Her Majesty, Queen Elizabeth II: the Australian State Coach, completed in 1988 and the Diamond Jubilee State Coach, which was first seen in use for the State Opening of Parliament on 4 June 2014. These beautiful, stately vehicles were the first to have been built for the British Royal Family since 1910.

At the age of eight, Mr. Frecklington (born 1950), had built a cart for a Shetland pony which refused to be ridden. A dream came true when in the early 1970s he heard of a vacant position in the Royal Mews at Buckingham Palace. Flying to London from Dubbo, near his home at Peak Hill, New South Wales, he successfully applied for the position. At first he worked with the Duke of Edinburgh's horses at Windsor Castle before transferring to the Royal Stables at Buckingham Palace. Here he became one of the team responsible for the upkeep and driving of the royal coaches and tending their horses in a rather busy schedule.

After some years, Mr. Frecklington left for Canada where he became involved in motor coach tours through the Canadian Rockies. Returning to Australia, he was invited to manage the Royal Coaches Exhibition to commemorate the Queen's Silver Jubilee celebrations, being the Edward VII's 1902 Postillion Landau, built by the old-established English firm of Hooper & Co., and the Glass State Coach, built in 1910 by A. Peters & Sons, which was first seen the following year during George V's Coronation celebrations. These important vehicles, which had never left Britain before, arrived in Australia in October 1977 where they were exhibited in Sydney before moving on to Brisbane, Canberra, Melbourne and other cities.

Such was his continuing interest in the Royal Coaches, that Mr. Frecklington travelled to London for the Royal Wedding in 1981. It was at about this time that he was determined to build a replica of the 1902 Postillion Landau, one of the most outstanding vehicles of its type. It was a unique opportunity, he said at the time, 'to preserve almost lost skills and craftsmanship of a bygone era.' He assembled a number of retired and semi-retired local craftsmen in Australia to assist him, including a spring-maker, a blacksmith and a wheelwright.

The successful outcome of this enterprise, which he undertook as a hobby, spurred Mr. Frecklington onto more ambitious projects. The first was the creation and design of the six horse-drawn Australian State Coach, which was presented to Queen Elizabeth II as the official gift to mark the Australian Bicentennial of 1988. This was the coach that Her Majesty used for the British State Opening of Parliament and other special events such as the Duke and Duchess of Cambridge’s wedding procession.

Mr. Frecklington’s next undertaking was even more ambitious. This was another six horse-drawn carriage, initially known as the State Coach Britannia but which, since its arrival in London in 2014, has been called the Diamond Jubilee State Coach. A full description of this marvellous conveyance is not possible here, but suffice to say that Mr. Frecklington was successful in his wish to create 'a time capsule of British history' on wheels which contains 100 pieces of British history dating back almost 1000 years. The coach is fitted with heating, electric windows and hydraulic suspension to ensure that its passengers' journeys are as comfortable as possible, a project for which he had recruited a variety of master craftsmen to assist him in its construction. Subsequently the coach was acquired by the Royal Collection Trust.

After delivering the new coach to the Royal Mews at Buckingham Palace, in readiness for it to be used for the State Opening of Parliament by Her Majesty in 2014, Mr. Frecklington wasted no time in commencing a new project to create a new Royal Egg, being an admirer of the great workmanship of Peter Carl Fabergé, who created his last egg about hundred years ago. In his own words, Mr. Frecklington created this Royal Egg masterpiece in honour of Queen Elizabeth's 'outstanding achievements and to commemorate Her Majesty's loyal and devoted service and tireless contribution to Britain and the Commonwealth.'

The 18 carat gold 'surprise' within 'The Royal Egg' is a miniature replica in breathtaking detail of the Diamond Jubilee State Coach, including the foldable steps in the interior and the trunk in the back. The attention to detail also becomes evident in the use of the original leather with which the State Coach was upholstered, as a lining for the compartment to hold the gold coach inside the Royal Egg, or referencing the flowers on Her Majesty the Queen's coronation train in the embroidered lining of the case and on the painted enamel border around the rim of the lid. The four symbols for England, Scotland, Wales and Northern Ireland embellish the enamel border, all crowned by an exact replica of the St Edward’s Crown worn by The Queen for her coronation. Head of the team of craftsmen that Mr. Frecklington chose to make this unique work of art was the Master Goldsmith, Jack Edward Perry, a former apprentice to the French luxury jewelry firm Cartier, at his studio located in Sussex.

The Royal Egg was also showcased at the Chelsea Flower Show in 2018 to mark the 65th year of Her Majesty's Coronation. In recent times, Her Majesty awarded Mr Frecklington the Royal Victorian Order for his loyal service and craftsmanship. 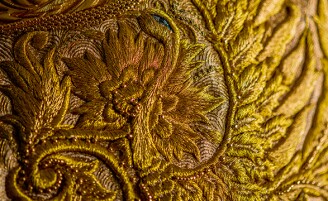