NEW YORK – John Birch, co-founder of New York design destination Wyeth, is the rare person who keeps his eye simultaneously trained on past, present and future. Once the behind-the-scenes planner who created retail environments for venerable fashion houses such as Ralph Lauren, today Birch is known for Wyeth's impeccably curated selection of 20th-century design as well as its visionary in-house line. This spring, Wyeth will open a new 10,000-square-foot downtown showroom and celebrate its 20th anniversary. To make room for what's to come, Birch is parting with a selection of his all-time favourite pieces in a dedicated Sotheby's auction WYETH: The Art of Timeless Design on 7 June. We spoke with Birch about standout lots in the sale, the inspiration behind his own designs and what the modern masters have taught him.

How did you first get started selling 20th-century design?
My wife, brothers and I opened a store after I left the fashion world. I wanted something that was little more eclectic than what was out there on the market, so we would mix primitive with 1970s with industrial and a little bit of everything that was pleasing to the eye. When you have a good eye for design, you tend to discover beautiful things, even if you don’t know their origin. But you learn quickly – who designed them, what their past and current values are.

Do you have any all-time favourite pieces in the upcoming auction?
A lot of what’s in the sale is from my personal collection. Some of it has been available before, but most was off-limits – I wanted to put together the best auction I could. My favourite of all is probably the Arteluce ball lamp, which I’ve owned for 20 years. I’ve never seen another one. Another loved piece is the large glazed ceramic cat from Finland. I think it’s Michael Schilkin’s masterpiece. Then there are also several one-of-a-kind items by Hans Wegner, including a prototype experimental desk that as far as we know, was the only one ever made. In some ways I regret selling these beautiful things, but there’s always something new coming to me. I have to make room for that and need to free up my time to keep designing. I believe that new design is what makes everything else relevant.

How do your own designs relate to the midcentury forms you collect and sell?
Often I work on projects where I notice a necessity and then I supplement a client’s needs. The Wyeth bamboo table that we’ve been making since 1996 is the best example. We would look for a low coffee table with a lot of area to use, but in the 1990s, nothing was really available. So I started making them and it became a staple. Similarly, some of my favourite clients recently bought a beautiful Gio Ponti headboard. The Wyeth lacquered steel and burnished brass bed platform that is the second to last lot in the Sotheby’s sale is something we developed a couple years ago out of necessity for situations just like that, when you need to supplement a headboard that has nothing to support it. For me, it’s really finding the niche that needs to be filled.

What do you hope to accomplish with your new TriBeCa location that’s opening this spring?
That’s what the new showroom is about actually. A lot of our clients have an idea of what they want, but there’s not really an existing way to get it. It has to be built. So we anticipate collaborating a lot more and designing more projects like lighting and tables in this space. It’s totally the experimental factory location.

Do you have a design philosophy?
All the design masters in the auction are people who have inspired me. I’ve learned you don’t cheat and you don’t skimp. You figure it out the right way. Sometimes you experiment and it isn’t successful. Maybe there will only be a handful of a certain piece out there and sometimes they only made a few of those special chairs, because they were incredibly difficult to produce. It challenges me. It makes me understand how it may be costly, but it’s better to make something like that and have a real understanding of quality and timelessness. 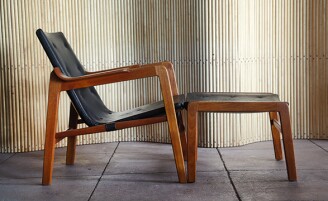