E scape Artists is our dedicated sale of unofficial Russian art from the post-war era, the so-called Soviet non-conformists or second avant-garde. These artists were a loosely affiliated group of disparate artistic communities, who sought to escape the ideological confines of Soviet visual culture, existing on its fringes if not in direct opposition to it. Some of the older generation, such as Ülo Sooster and Boris Sveshnikov, had been sent to the gulags, and many would eventually leave the Soviet Union for the West.

Of the groups represented in the sale, the first to emerge after Stalin’s death and in the context of Khrushchev’s Thaw was the Lianozovo group. Often working in an abstract style, they were influenced by their rediscovery of the long-suppressed original avant-garde and included artists such as Oscar Rabin, Lydia Masterkova and Vladimir Nemukhin.

There was more fluidity among the younger Moscow groups that emerged in the late 1960s and 1970s. The so-called Sretensky Boulevard group, named after the location of their studios, comprised a large number of book illustrators, such as Bulatov, Kabakov, Pivovarov and Vassiliev, all of whom were also associated with the Moscow Conceptualists.

Another subsidiary within Moscow Conceptualism was Sots Art, a term coined by Vitaly Komar and Alexander Melamid for a movement that offered a counterpoint to American Pop Art. Characterised by a kitsch aesthetic and the appropriation of Soviet mass-cultural imagery, many of its members, including Komar and Melamid, Alexander Kosolapov and Leonid Sokov emigrated to the United States.

The sale is led by a very rare early conceptual work by leading contemporary artist Ilya Kabakov. Dating from the mid-1960s, Conditional Reflex has only changed hands once since it was acquired by journalist Henry Shapiro directly from the artist in 1973.

In his appreciation, Norman Rosenthal notes that ‘[n]ow, looking back at a complex sixty-year history of painting, drawing and installation art, the small seeds of all that Ilya Kabakov was to imagine and execute in his art – later to be joined by his wife Emilia – and Moscow conceptualism in general are weirdly contained in this very early work of the artist’. Ilya and Emilia Kabakov’s work was the subject of a major show at Tate Modern in 2017.

The sale features a selection of works from a German private collection lovingly put together by a couple of collectors over the course of the 1990s. They first discovered the Soviet non-conformists at an exhibition in Hamburg in 1989 and went on to acquire the majority of the works in the collection from German galleries, others directly from the artists. A particular highlight are the rare works on paper from the late 1950s and 1960s by Masterkova, Nemukhin, Yakovlev and Sidur. 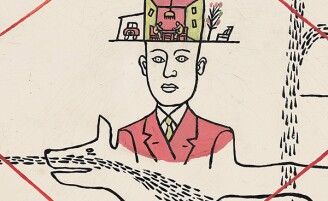